“Think of climate obstructionism in Alberta today as a three-legged stool. Postmedia and commentators like Smith are one leg, the Kenney government is another, and fossil fuel industry lobby groups are the third.”

It is an irony, though not a particularly satisfying one to observe, that while Premier Jason Kenney’s United Conservative Party government moves swiftly to repeal Alberta’s carbon tax, the province is aflame, with more than 5,000 Albertans required to leave homes and communities in imminent danger of destruction.

It is only May. The leaves on most of the elm trees on my street in St. Albert have not even appeared yet. In other words, it’s barely spring. God only knows what things will be like around here by midsummer. Smoky, I imagine.

Well, get used to it. It gets harder by the day to deny the reality of global climate change. One of the effects of this inconvenient fact on Alberta’s part of our planet is that there are going to be more frequent and more severe forest fires — the kind that destroyed large swaths of the town of Slave Lake in 2011, Fort McMurray in 2016, and which are now threatening High Level.

Tremonti’s interview with Ed Struzik, author of Firestorm: How Wildfire Will Shape Our Future and a fellow of the Queen’s Institute for Energy and Environmental Policy, was playing on the car radio as I drove to work. Fire-caused weather that results in dynamic, fast moving fires is “the new reality,” Struzik was saying. “We saw it in B.C. in the last two years, and Alberta the year before, Waterton National Park. Ontario got hit hard last year. I think this is what we’re going to be seeing more of every summer.”

Bill 1, An Act to Repeal the Carbon Tax, was introduced in the provincial legislature on Wednesday and will take effect on May 30. A federal carbon tax will likely replace it, although Kenney has vowed to fight that in the courts. The position of this bill atop of the government’s radical agenda is intentionally symbolic and tells you everything you need to know about where Kenney really stands on climate change. MORE 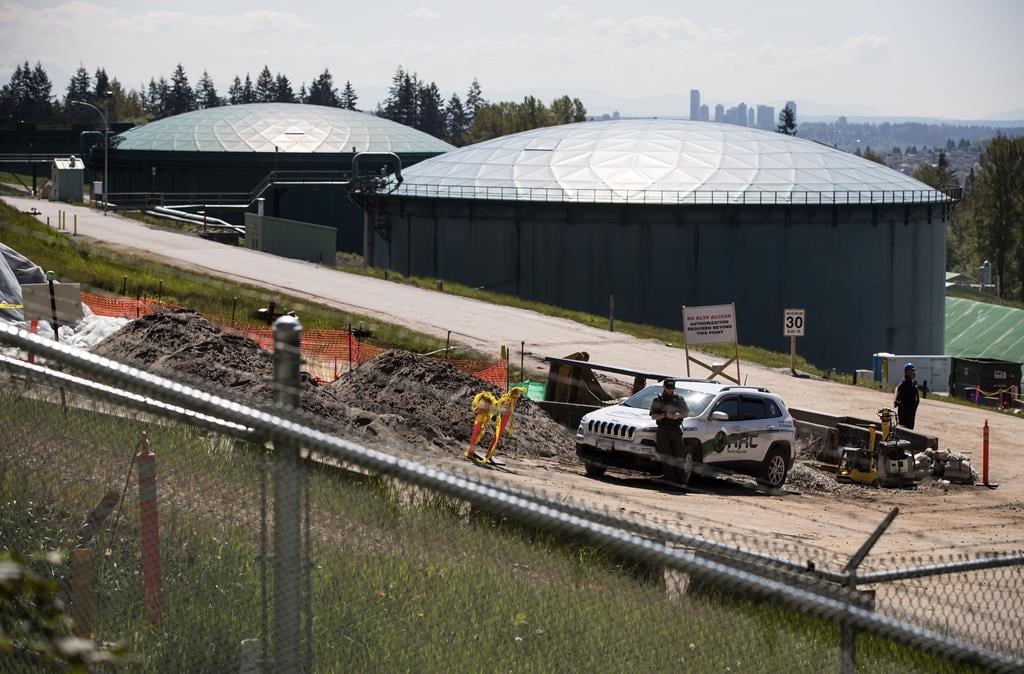 A security guard stands nearby construction workers at the Kinder Morgan Burnaby Terminal tank farm, the terminus point of the Trans Mountain pipeline, in Burnaby, B.C., on Tuesday, April 30, 2019. File photo by The Canadian Press/Darryl Dyck

A court has ruled that British Columbia cannot restrict oil shipments through its borders in a decision that marks a win for the Trans Mountain pipeline expansion and Alberta’s efforts to get its resources to overseas markets.

The province filed a constitutional reference question to the B.C. Court of Appeal that asked whether it had the authority to create a permitting regime for companies that wished to increase their flow of diluted bitumen.

A five-judge panel agreed unanimously that the amendments to B.C.’s Environmental Management Act were not constitutional because they would interfere with the federal government’s exclusive jurisdiction over interprovincial pipelines.

B.C. argued that the proposed amendments were meant to protect its environment from a hazardous substance, while the federal government and Alberta said the goal was to block Trans Mountain. MORE 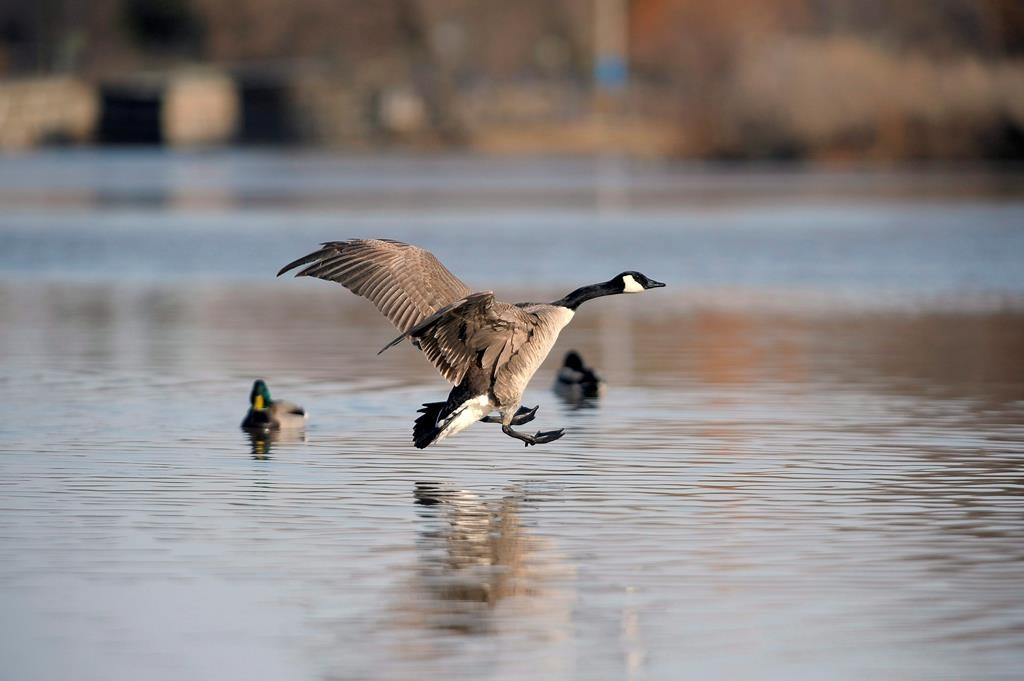 A goose lands on water at Wascana Centre in Regina, Saskatchewan on Monday, April 6, 2015. File photo by The Canadian Press/Michael Bell

In Canada, wildlife face many challenges, as they are hunted, managed, and their food sources and habitats are altered by climate change.  This Special Report has received generous funding from readers to pay for reporting on an issue which, like its subjects,  is often out of sight and out of mind. 261 Articles

We’re calling for a global strike on 20 September. Disrupting our normal lives is the only way to secure our future 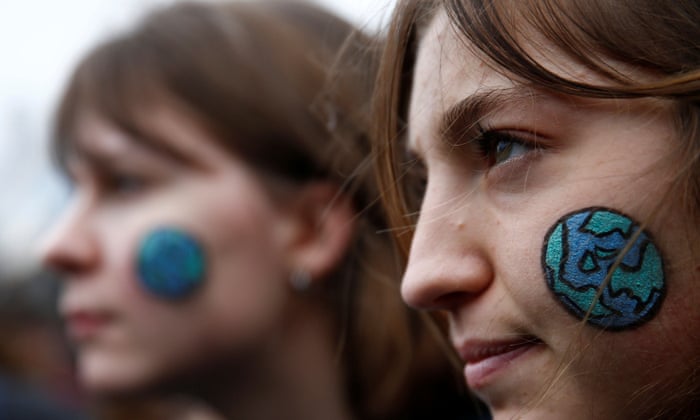 ‘We are the people who happen to be alive at the moment when our choices will determine the future for thousands of years’. Photograph: Stéphane Mahé/Reuters

On 20 September, at the request of the young people who have been staging school strikes around the world, we’re walking out of our workplaces and homes to spend the day demanding action on the climate crisis, the greatest existential threat that all of us face. It’s a one-day climate strike, if you will – and it will not be the last. This is going to be the beginning of a week of action all over the world. And we hope to make it a turning point in history.

We hope others will join us: that people will leave their offices, their farms, their factories; that candidates will step off the campaign trail and football stars will leave the pitch; that movie actors will scrub off their makeup and teachers lay down their chalk; that cooks will close their restaurants and bring meals to protests; that pensioners too will break their daily routines and join together in sending the one message our leaders must hear: day by day, a business as usual approach is destroying the chance for a healthy, safe future on our planet.

We are well aware that, by itself, this strike and a week of international climate action won’t change the course of events. The good news is that we have the technologies we need – the price of a solar panel has plunged 90% in the past decade. And we know the policies to make them work: all across the planet some version of a Green New Deal has been proposed, laws that would speedily replace fossil fuels with the power of sun and wind, along the way providing good jobs and stabilising strong local economies. We salute the people – many of them young – working hard to pass those measures against the entrenched opposition of the fossil fuel industry.

The September day of global action is designed to support those people. We hope all kinds of environmental, public health, social justice and development groups will join in, but our greatest hope is simply to show that those working on this crisis have the backing of millions of human beings who harbour a growing dread about our environmental plight but who have so far stayed mostly on the sidelines. It may take a few attempts to get those kind of numbers in the streets, but we don’t have too long: our window for effective climate action is closing fast. MORE

Children and young people have issued an urgent call for adults to join them on a general strike on 20 September. 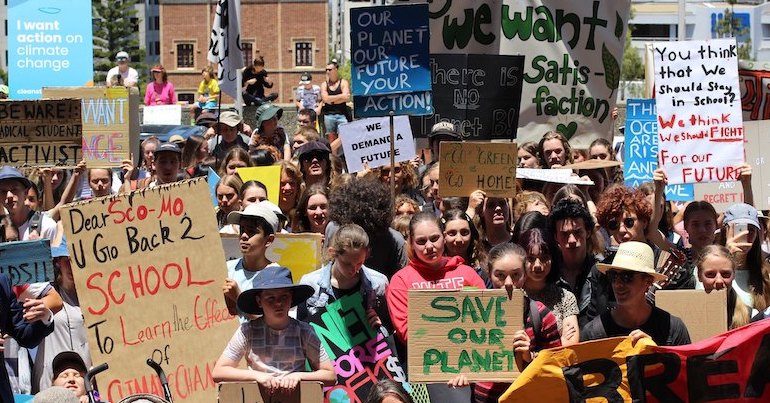 On 24 May, over a million children around the world marched out of school to demand their voices are heard over the growing climate chaos that we all face. Under the banner of #ClimateStrike and #SchoolStrike4Climate, these young people are a powerful force.

Swedish 16-year-old Greta Thunberg has inspired children around the world. She’s been on strike, leaving school every Friday, since August 2018, to “urge leaders to do more to tackle climate change”. The movement has soared globally, and the 24 March strike was the biggest yet. Young people around the world marched out of school to share their rage and demand that governments and leaders take urgent action.

As Thunberg noted, young people left school in at least “1623 places” in “119 countries around the world”:

Tomorrow we schoolstrike for the right to a future. In 1623 places in 119 countries around the world.
And counting!
Join us!
Everyone is needed. Find or register your closest strike at https://t.co/Fu0gVe3IOc
#fridaysforfuture #climatestrike #schoolstrike4climate pic.twitter.com/CDYlbsjfUi 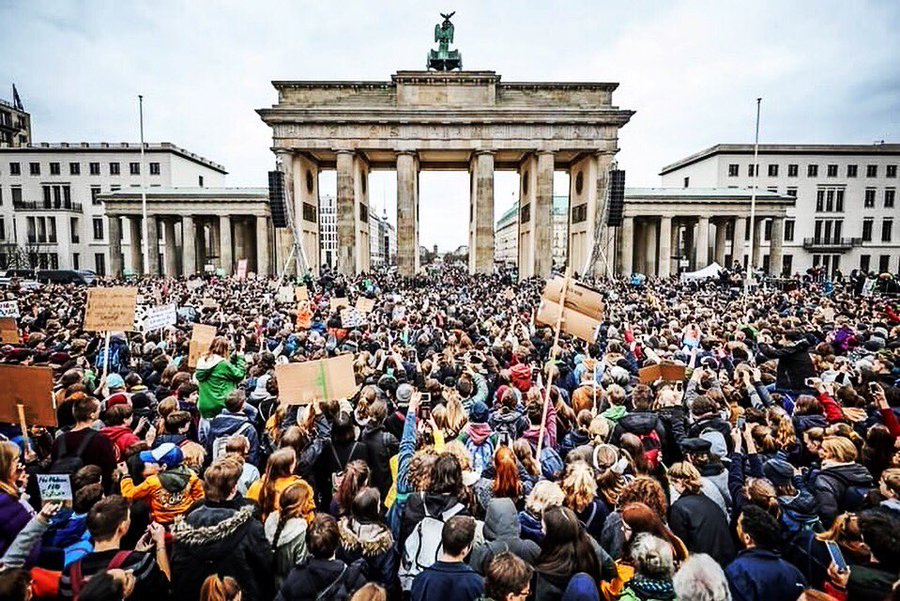 Children and young people have also issued an urgent call for adults to join them on a general strike on 20 September. Well-known activists and academics including Naomi Klein, Margaret Atwood, and Noam Chomsky have now backed this call.

“But this also has to go beyond education. We need to halt climate time-bombs like fracking, the new deep coal mine in Cumbria and the third runway at Heathrow. And importantly we need strong action from all parties to boost renewable energy, create green jobs and address the vast inequalities in our society.”

A manifesto for tackling the climate change crisis

When released into the atmosphere CO2 remains active for 100 years. Forests on which the carbon offsets are based, rarely remain intact for that long. 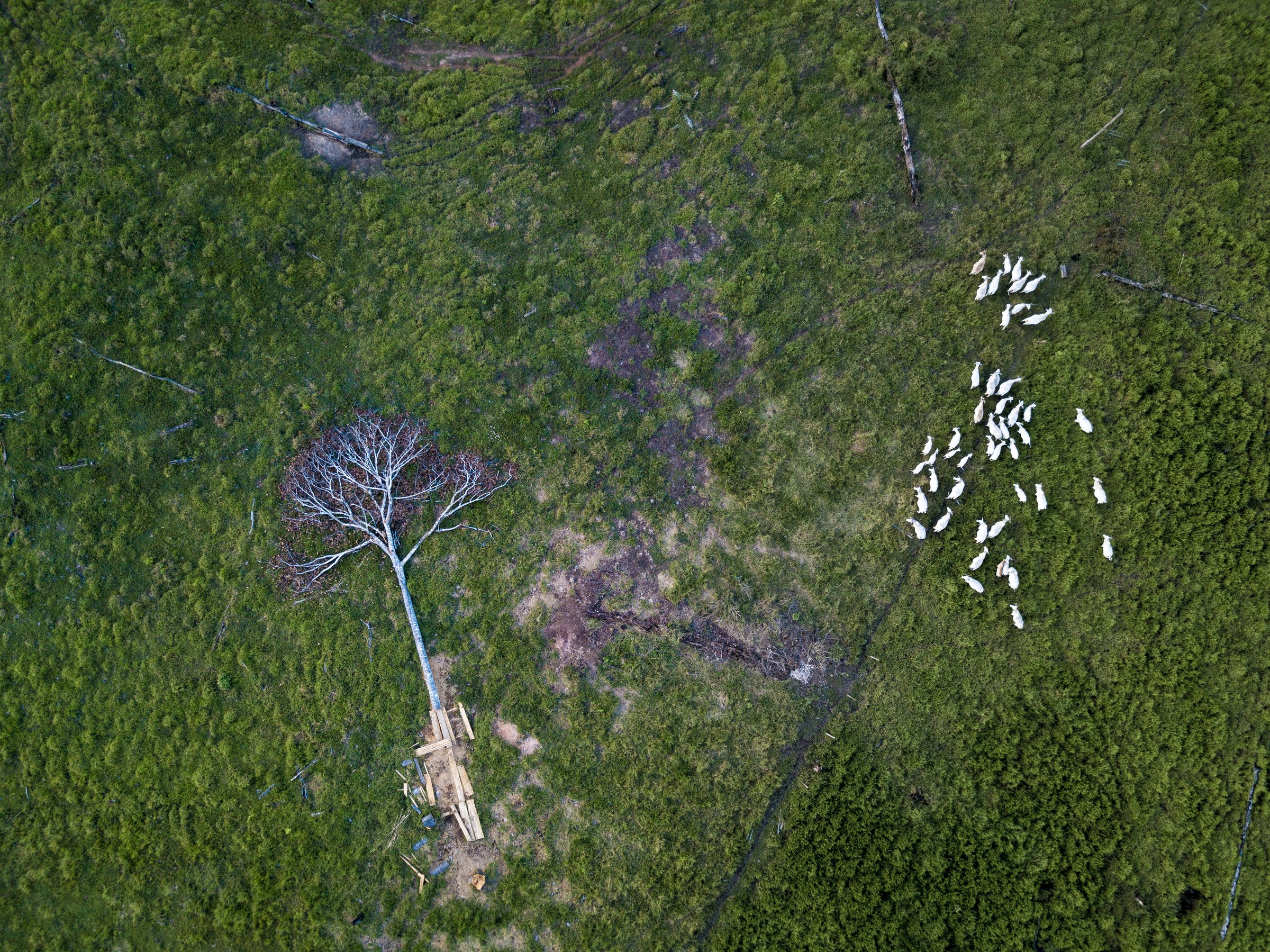 Photography by Fernando Martinho, for ProPublic

RIO BRANCO, BRAZIL — The state of Acre, on the western edge of Brazil, is so remote, there’s a national joke that it doesn’t exist. But for geochemist Foster Brown, it’s the center of the universe, a place that could help save the world.

“This is an example of hope,” he said, as we stood behind his office at the Federal University of Acre, a tropical campus carved into the Amazon rainforest. Brown placed his hand on a spindly trunk, ordering me to follow his lead. “There is a flow of water going up that stem, and there is a flow of sap coming down, and when it comes down it has carbon compounds,” he said. “Do you feel that?”

I couldn’t feel a thing. But that invisible process holds the key to a massive flow of cash into Brazil and an equally pivotal opportunity for countries trying to head off climate change without throwing their economies into turmoil. If the carbon in these trees could be quantified, then Acre could sell credits to polluters emitting clouds of CO₂. Whatever they release theoretically would be offset, or canceled out, by the rainforest.

Five thousand miles away in California, politicians, scientists, oil tycoons and tree huggers are bursting with excitement over the idea. The state is the second-largest carbon polluter in America, and its oil and gas industry emits about 50 million metric tons of CO₂ a year. What if Chevron or Shell or Phillips 66 could offset some of their damage by paying Brazil not to cut down trees?

The appetite is global. For the airline industry and industrialized nations in the Paris climate accord, offsets could be a cheap alternative to actually reducing fossil fuel use.

But the desperate hunger for these carbon credit plans appears to have blinded many of their advocates to the mounting pile of evidence that they haven’t — and won’t — deliver the climate benefit they promise.  MORE