The scourge of climate change is the great unifying issue of our time. The time is propitious for Canadian political parties to adopt the Green Party’s suggestion to establish an inner cabinet of all parties to address the emergency facing us. Tell your MP we need all hands on deck. 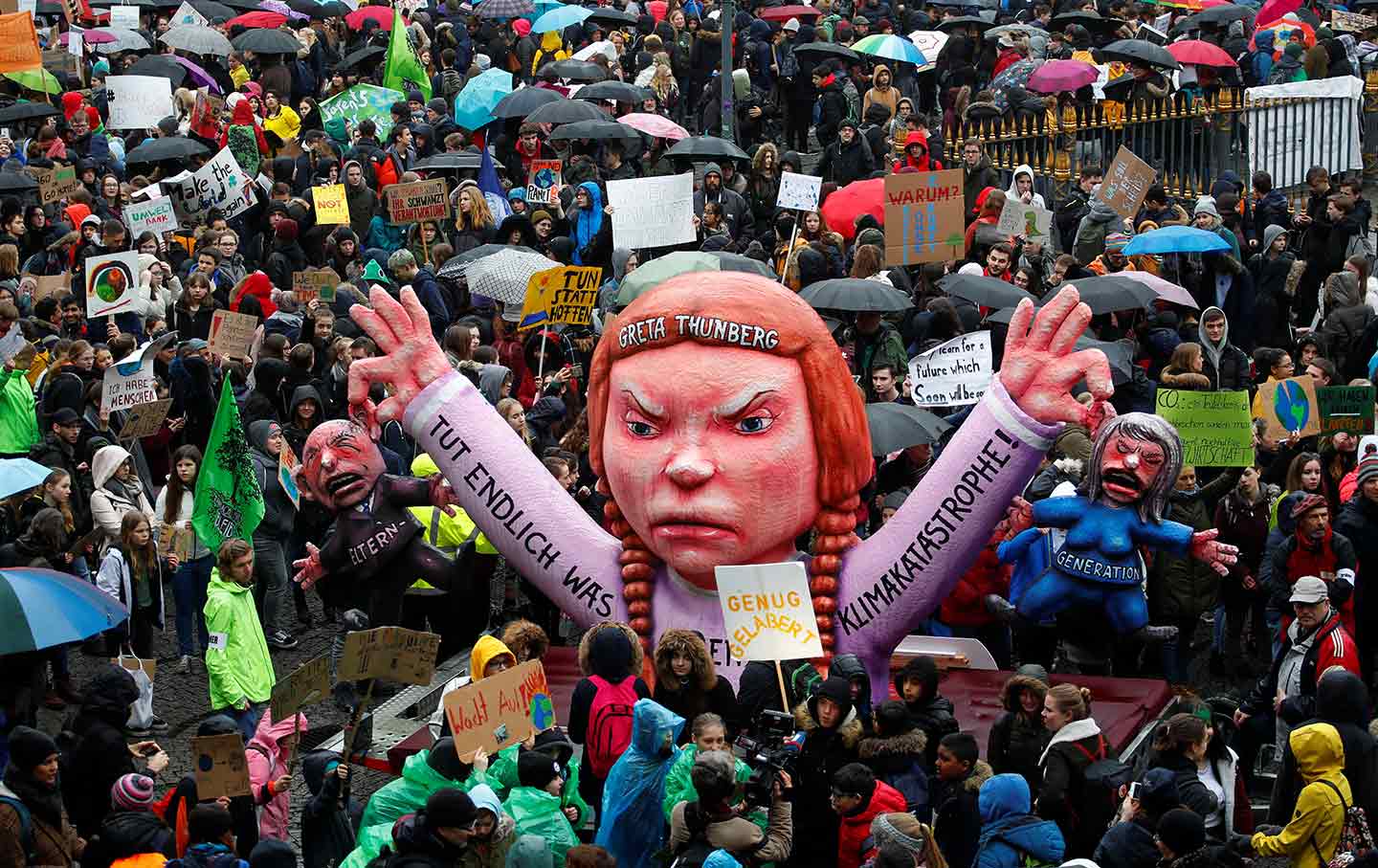 For years, European politicos and others committed to the idea of a united Europe have pined for a popular, all-Europe project that stands for the best intentions of, and the imperative for, the European project. In order to counter the EU’s distant, bureaucratic image—and the blunt the attacks of right-wing Euroskeptics—EU officials have turned to issues that touch almost all Europeans, from digital rights to consumer protection to telecommunications.

But none of these worthy endeavors, among others, have fired the passions of the average European, much less young Europeans.

But now, on the eve of the landmark May 23–26 European Parliament election, such a cause—complete with hundreds of thousands of energized participants—is banging at the EU’s door. Although the striking high schoolers of Fridays for Future (FFF) is not just a European movement but a global one, the students of Europe have found common cause with one another in a campaign demanding tangible political action from the EU to address climate change.

Perhaps unwittingly, the kids have revealed a new raison d’être for the EU beyond the postwar remits of peace and prosperity. As the young people insist, the supranational EU can and must devote itself to leading the global battle to arrest rising temperatures and seas if we expect to slow global warming.

In an open letter to the EU earlier this month, an international group of FFF activists wrote that the EU “holds enormous responsibility, not just for our future, but also for the life of billions of people across the world. Accept this responsibility. Make climate the priority.”

For the EU, the scourge of climate change could be just the ticket to rejuvenate it. On the one hand, it is our age’s most urgent issue. On the other, it is one that the surging far-right parties don’t even pretend to have answers to. When Europe’s radical nationalists deny climate change, as most do, they side with less than 5 percent of Europeans in the EU’s most populous countries. (In Germany, the hard-right Alternative for Germany calls man-made climate change “heresy” and wants to halt the clean-energy transition, and the Brexit Party’s front man, Nigel Farage, ridicules the link between rising temperatures and greenhouse gases.) The national populists have committed a huge blunder—and Europe’s democratic parties should pounce on it by making the kids’ campaign their own. MORE

This is a huge breakthrough that dramatically reduces the cost of transportation of vaccines. The US Centers for Disease Control and Prevention estimates that 9 to 36 million cases of flu occur annually, resulting in 12,000 to 56,000 deaths each year. 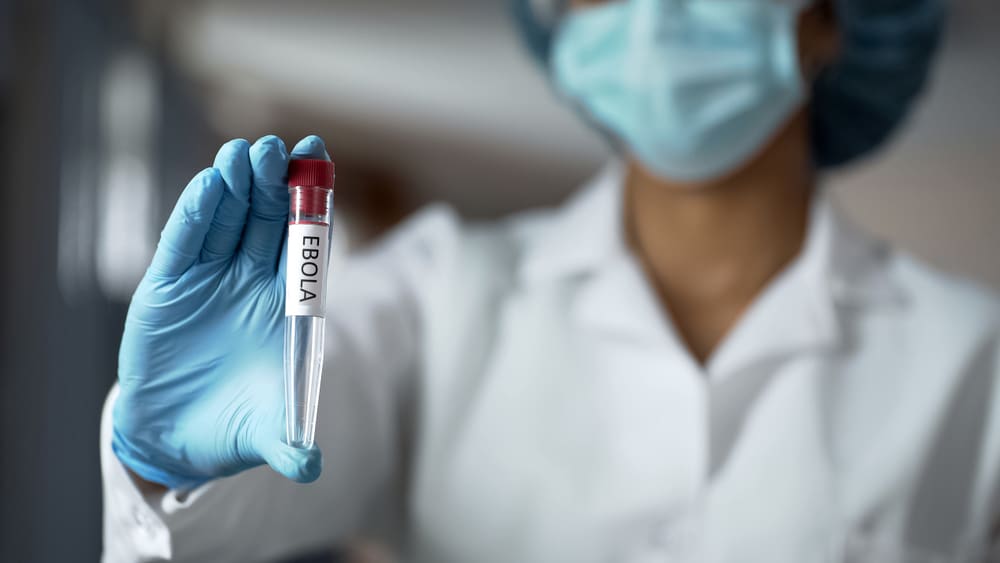 Globally, nearly 20 million children are vulnerable to preventable diseases because they don’t get vaccines

A breakthrough by researchers at McMaster University could save lives around the world by making it easier and far cheaper to deliver fragile vaccines for deadly viruses such as Ebola and influenza to remote communities in developing countries.

The innovation is almost as easy “as stirring milk and sugar into coffee,” said Matthew Miller, an assistant professor in McMaster’s biochemistry department, who was part of the interdisciplinary team that worked on the project. The process involves combining sugars used for other purposes with the drugs, turning the temperature-sensitive vaccine into a lightweight sugary gel that can travel for long periods through harsh climates.

Globally, nearly 20 million children are vulnerable to preventable diseases because they don’t get vaccines, with one-quarter living in three countries: Afghanistan, Nigeria and Pakistan.

Transporting and storing vaccines is complicated because they need to be kept at low temperatures to remain viable – a system of constant refrigeration known as the “cold chain.” Warm weather and rough roads don’t just increase the risk the vaccines will fail, they also raise the price tag – in some cases, transportation alone accounts for 80 per cent of the cost of a vaccine program, Dr. Miller said.

At McMaster, a team of engineers and infectious-diseases scientists decided to look for a lighter, more travel-friendly solution. They had one already: an edible coating that had been previously created by chemical engineers at the university to extend the shelf life of fruit.

As researchers discovered, the same two ingredients – a pair of sugars called trehalose and pullulan, which are used to make the jelly coating on breath strips – could do the same for a delicate vaccine. Combine, stir and dry, and their work suggests that a vaccine would be able to travel safely and relatively cheaply in the sugary gel, protected from the heat for months. MORE

The Ford Government is a textbook example of extreme neoliberal policy: reduce government and regulations to a minimum; cut taxes; let business operate freely without restrictions; encourage investment and embrace the free market to deliver growth, maximum profits — all leading to prosperity. Question: Is this making your life better? The Ford government has axed provincial funding for two institutes credited with positioning Ontario and Canada at the forefront of artificial intelligence research — a field the government’s own prosperity think tank says must be supported if the province wants to remain competitive and create jobs in a booming technology sector.

The Ministry of Economic Development, Job Creation and Trade cut $20 million from the Vector Institute for Artificial Intelligence and $4 million annually from the Canadian Institute for Advanced Research (CIFAR), which supports a hub of AI-focused computer scientists. Both draw funding from the federal government and other sources and say they will adjust programming or operations.

A prosperity think tank funded by the ministry concluded in a report last year that Ontario has a “rich AI ecosystem led by some of the world’s best AI scientists and business thinkers,” thanks in part to early investment in basic research. The report cited the Vector Institute as an attractor of high-profile talent to the region.

The report’s key recommendation: “It is imperative that the province stay ahead of the curve and support the research and development of this technology, so that we stay at the leading edge of AI innovation.”

The think tank that issued the report, the Institute for Competitiveness and Prosperity, was itself axed by the government and closed its doors last week after 18 years. It was the research arm of a task force created by then premier Mike Harris in 2001 and was designed to examine policies that could help Ontario become more competitive. MORE

Why Doug Ford is worse than Mike Harris 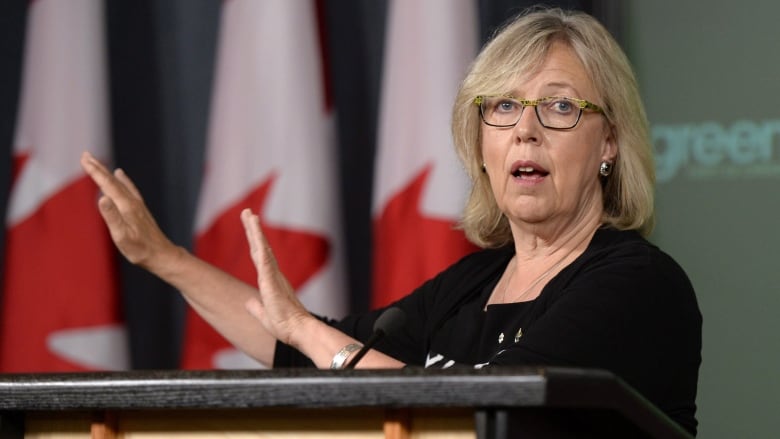 Green Party Leader Elizabeth May says not enough is being done to tackle climate change, and the future is at risk if that doesn’t change.(Justin Tang/Canadian Press)

Elizabeth May has high hopes for the 2019 federal election.

OTTAWA —  If the 2019 election ends up in a minority situation but the Tories have the most seats, Green Party Leader Elizabeth May thinks the Liberal government should try to form a new  government with support from other parties.

In an interview with HuffPost Canada’s politics podcast ‘Follow-Up,’ May said that if the campaign results in a hung Parliament, “yes, of course” the party in power should try to convince the governor general that they can hold the confidence of the House.

“We’re now up to 17 elected Greens across Canada. And that’s pretty cool.”

May thinks the party’s support is due in part to the public’s increasing concern over climate change but also to “a general disillusionment with the idea that any of the old three parties tend to disappoint and will say one thing in an election and something else afterwards.”

“I don’t think that, you know, adherence to ignorance is really something that encourages voters to support you.”
—Elizabeth May

She remains concerned that support for her party could swing back to the Liberals or the NDP during a campaign when voters are told a vote for the Green candidate would indirectly help elect a Conservative member. But she’s hopeful “fear factor voting” has prompted enough voter remorse that Canadians will feel free to vote for candidates they believe in.

What’s more, May said, is that while Conservative Leader Andrew Scheer may represent the same policies as former prime minister Stephen Harper, he is less polarizing a figure. Not that she thinks he should become prime minister. She calls him “unfit to govern” due to his position on climate change. MORE

In 2015, Libby Davies retired as deputy leader of the NDP and member of Parliament for Vancouver East, after four decades of work as a politician, community organizer and activist for progressive causes. Her recently published book, Outside In: A Political Memoir,recounts her career and the causes she has worked for, from the legalization of same-sex marriage to housing justice and access to safe injection sites on Vancouver’s Downtown Eastside. In the following excerpt, Davies diagnoses what went wrong for the NDP in the 2015 federal election and how the party can avoid the same pitfalls in the future.

Certainly, what happens in Parliament is enormously important. The terrible legislation passed by Harper’s government, his disregard for democracy, his secrecy, arrogance, and elitism, it was all part of a decade of darkness. Fighting the government in Parliament was our job, and we did it well.

But somewhere along the way we lost our bigger vision and connection with people, including some of our base, as we became focused on winning. We forgot how to be creative and bold outside of Parliament and bring people with us.

I know we face formidable double standards in the mainstream media. Regardless of how well we do, they would still find a way to trash or ignore us. On that I am cynical. All the more reason for us to be smarter than all of them, and find new ways to do politics with people who have a passion for social justice and a better world.

In these political times, the NDP is needed more than ever. The rise of right-wing populism even here in Canada and the underwhelming position of Trudeau’s Liberal government on crucial issues such as climate change, democratic electoral reform, income inequality, and more make it crucial for the federal NDP to stand tall and unwavering in its commitment to a boldly progressive agenda. We must embrace a post-fossil-fuel economy and lead the way on an economic and social transition to it, and demonstrate that retraining, good jobs, and social advances create a healthier economy and healthier society overall. MORE