On Wednesday, in the wake of the majority vote by 25 white Republican men in the senate of one of the most impoverished states in the U.S., #AlabamaAbortionBan was trending both south and north of the Canadian border. Also trending, #Talabama.

That’s because the Alabama abortion ban is one of the most draconian revocations of women’s rights since women won the vote, a ban that would force even 11-year-old victims of rape and incest to carry to term.

As for Ontario Premier Doug Ford, he just couldn’t deal with the topic. He ducked NDP MPP France Gélinas during question period by tapping one of his ministers, who also dodged the question by talking about — what else? — the “job-killing, regressive carbon tax.”

Later, Ford’s office issued a statement saying “the government will not re-open the abortion debate.”

Meantime, in Alberta, Jason Kenney got the blessing of anti-choice groups in his successful run for the premier’s post. And, although he too has said he won’t re-open the debate, recall that he was the founder of the “Pro-Life Caucus” on Parliament Hill. What’s more, he appointed Adriana LaGrange, the former president of Red Deer Pro-Life, as his education minister.

So the war on women is still on and my side is still losing.

We don’t have equal pay. Lawmakers are trying to strip us of the right to control our bodies. And, when we do make babies, we have little access to safe and affordable child care. It’s no wonder there are so many struggling single mothers and children who go hungry — in Canada, in 2019.

It’s obvious, let women work and everybody profits, and that includes government coffers via taxation. It’s been proven in Quebec.

But in Ontario, Ford has cut child-care centres’ general operating funding, which helps pay child-care workers, by $40 million. He has also slashed the capital funding portion, which is used to build new centres, by $93 million, leaving only $10 million in the kitty. That’s a full-frontal assault on women’s rights, and a short-sighted one as well.

This week, Oxfam Canada urged federal parties to put publicly funded child care on the ballot. Citing a 2017 International Monetary Fund study, Oxfam reported that a 40 per cent reduction in child-care costs would result in 150,000 highly educated stay-at-home mothers entering the workforce. This would increase Canada’s GDP by two percentage points, or $8 billion a year.

But there’s little chance this will happen, even in another “feminist” Justin Trudeau government. (Remember years and years of child-care promises by the federal Liberals in the ’90s?) But at least Trudeau openly stands firm on abortion rights.

As for Conservative leader Andrew Scheer, there’s no chance at all. In fact, given his “pro-life” beliefs, even abortion rights are at risk. In Canada, the war on women is escalating, but slowly and stealthily, as Conservative governments form majorities across the country. MORE 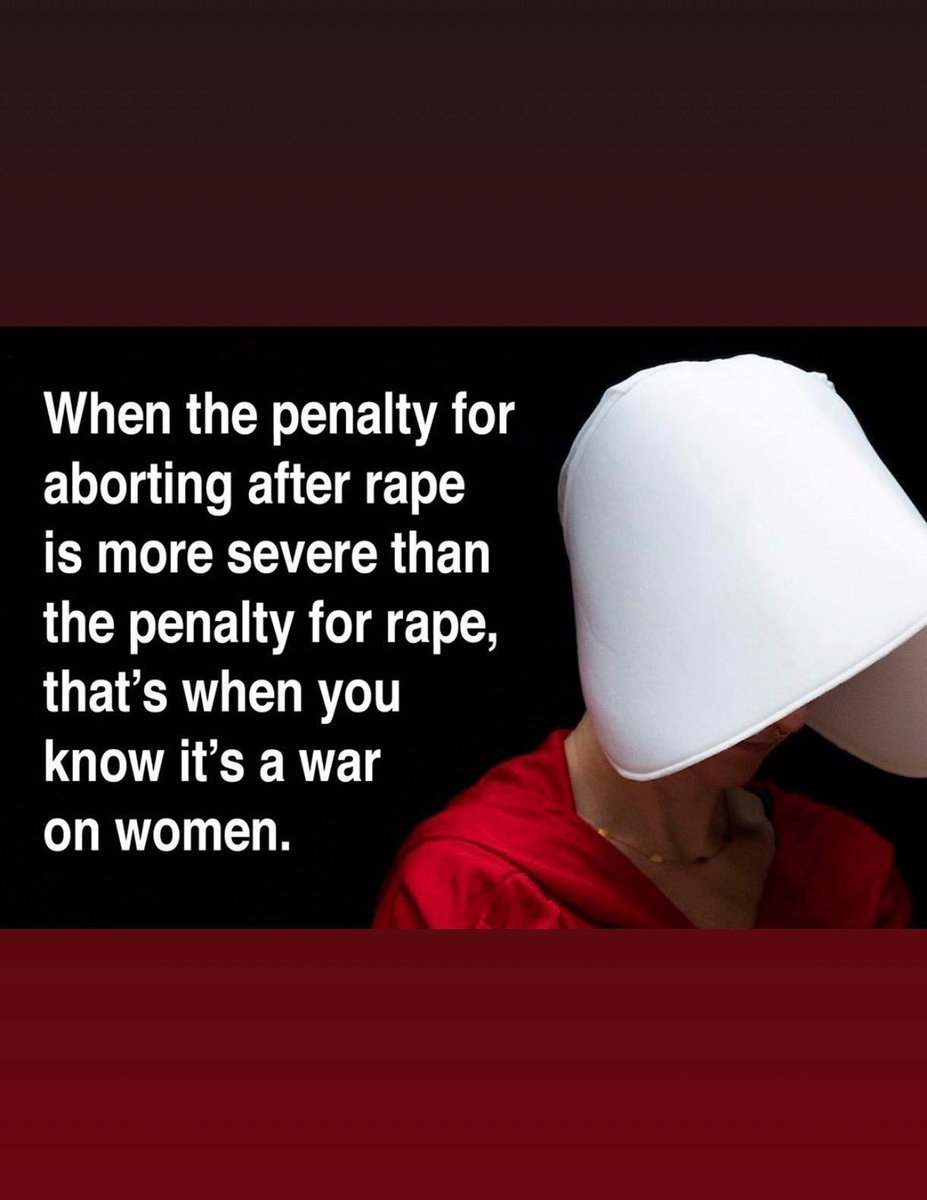 To Prince Edward Council: This is a climate emergency. Over the weekend, the climate system sounded simultaneous alarms. Near the entrance to the Arctic Ocean in northwest Russia, the temperature surged to 29 Celsius.

Meanwhile, the concentration of carbon dioxide in the atmosphere eclipsed 415 parts per million for the first time in human history.

By themselves, these are just data points. But taken together with so many indicators of an altered atmosphere and rising temperatures, they blend into the unmistakable portrait of human-induced climate change.

Saturday’s steamy reading was posted in Arkhangelsk, Russia, where the average high temperature is around 12 C this time of year. The city of 350,000 people sits next to the White Sea, which feeds into the Arctic Ocean’s Barents Sea.

In Koynas, a rural area to the east of Arkhangelsk, it was even hotter on Sunday, soaring to 30.6 C. Many locations in Russia, from the Kazakhstan border to the White Sea, set record-high temperatures over the weekend. The warmth also bled west into Finland, which hit 25 C Saturday, the country’s warmest temperature of the season so far.

Popularized by the youth-led Sunrise movement in the United States, and by Congresswoman Alexandria Ocasio-Cortez, a Green New Deal is a bold vision for tackling climate change and inequality at the same time.

The concept of a Green New Deal has been around for a while — former MP Megan Leslie called for one during a House of Commons debate back in 2009 — but recently, it’s been gaining momentum in Canada, especially after the Powershift Young and Rising gathering in Ottawa this past February. A youth convergence organized to skill up and build a stronger and more inclusive youth climate justice movement, Powershift made imagining Canada’s Green New Deal the focal point of a series of strategy sessions, workshops, and panels.

Since then, it’s steadily grown. Social movement leaders have laid out the broad strokes for Canada’s Green New Deal: ambitious action to address climate change, a focus on putting justice first by upholding the United Nations Declaration on the Rights of Indigenous peoples, ensuring dignity for all, and creating millions of good jobs.

But bringing this idea to life will mean transformative policy change to completely retool the economy. And, in order for it to truly work for everyone, the vision for a Green New Deal must be built from the ground up.

Who decides what’s in a Green New Deal and what isn’t?

People from all walks of life, and every corner of the country, will be in the front seat when it comes to defining Canada’s Green New Deal.Starting this weekend, thousands of people will gather in community centers, church basements, and living rooms all across Canada to identify the kind of solutions that will allow our communities to thrive.

These town halls — almost 200 of them — will come in all shapes and sizes, and take place in urban and rural communities alike. Each one will help us ground-truth a Green New Deal for Canada from the bottom up. Input collected from town halls will help sharpen our shared vision of a Green New Deal, and we’ll use that vision to push politicians to take ambitious action. MORE

For too long Big Oil & their political allies have compromised our future for profit. That was their time. The federal election is #OurTime2019 🌅. Learn more about the youth-led campaign with @350canada to fight for a #GreenNewDeal for Canada. https://t.co/l3vTla1QEd pic.twitter.com/vtntHgjj2z — 350 Canada (@350Canada) April 17, 2019 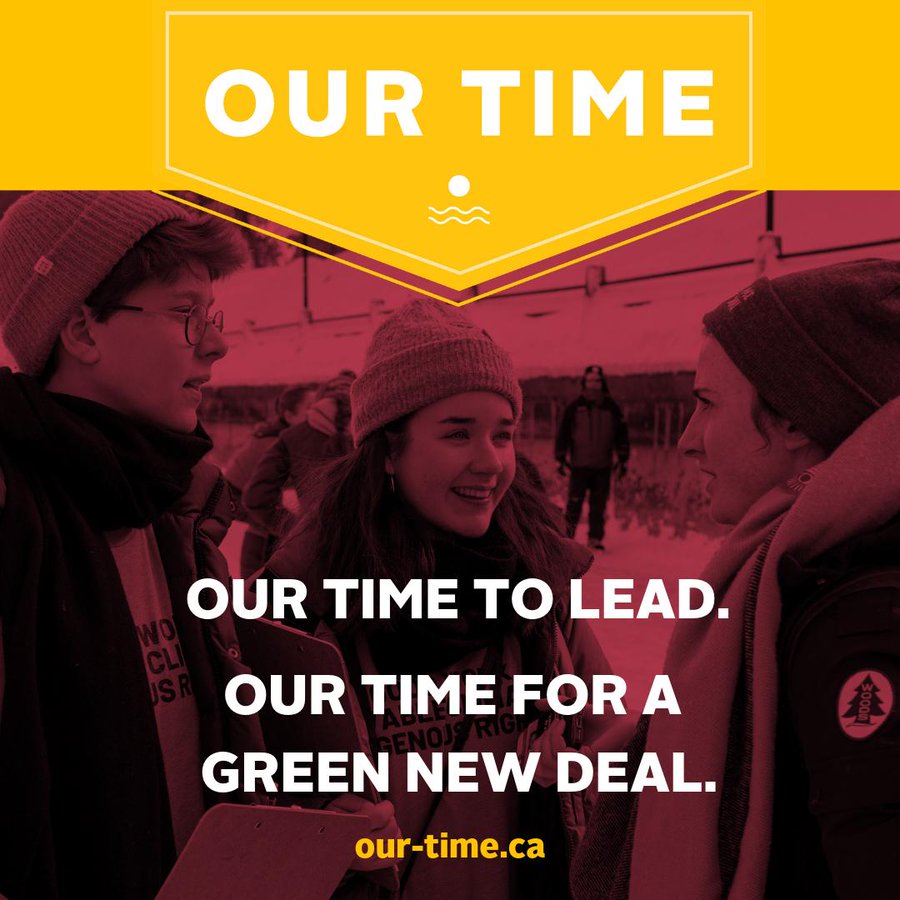 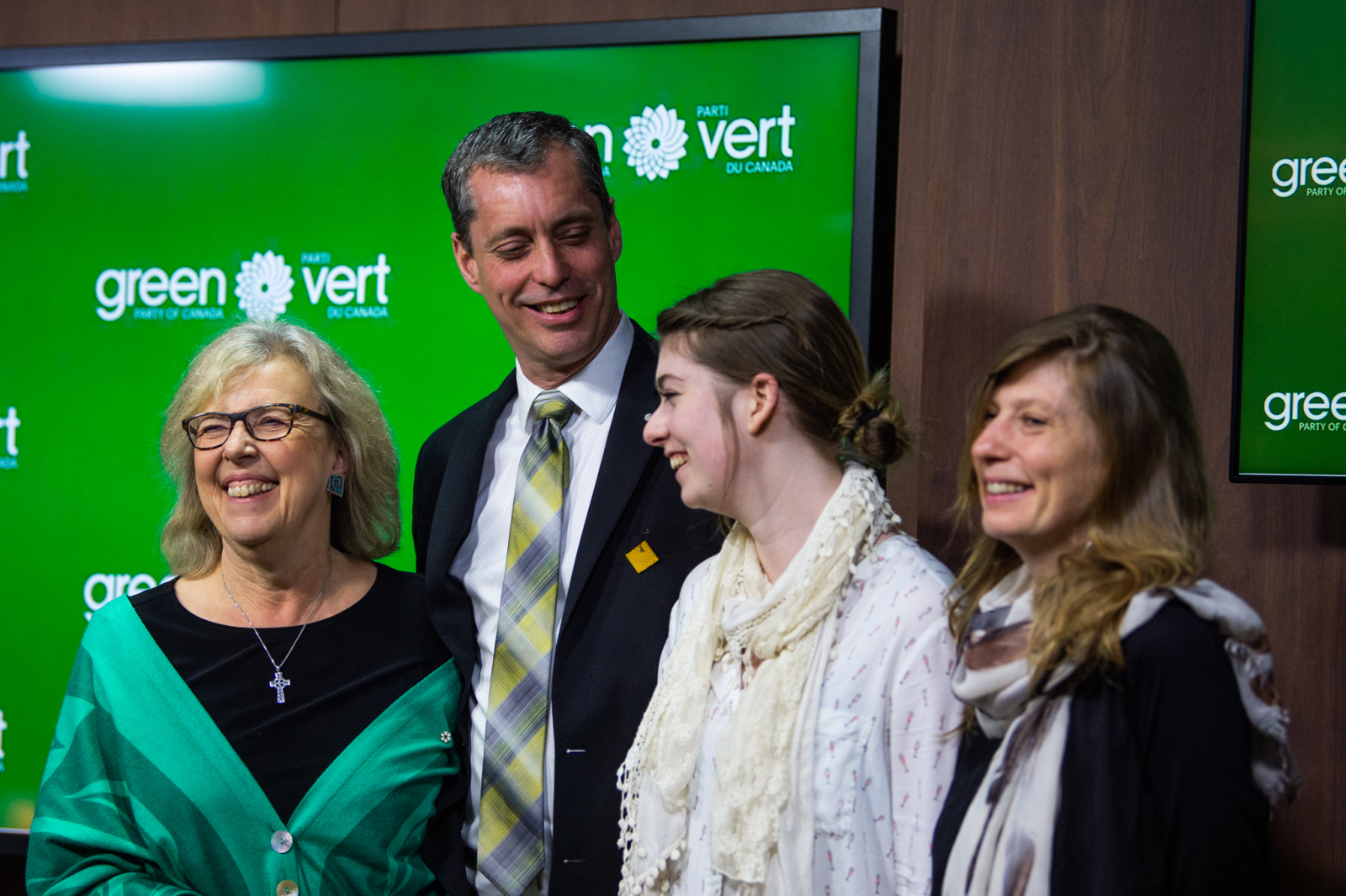 Green Party Leader Elizabeth May stands next to Paul Manly, who won the Nanaimo-Ladysmith byelection for the Green Party, Manly’s daughter Aven and wife Samantha at a press conference on Parliament Hill on May 10, 2019. Photo by Kamara Morozuk

The Green Party of Canada has introduced a sweeping climate change plan that promises to stop foreign oil imports, create a non-partisan federal cabinet and turn Canada’s economy carbon-free by the end of the 21st century.

Leader Elizabeth May unveiled the 20-point plan on Thursday in Ottawa, pledging that a Green government, if elected would immediately ramp up action, including new infrastructure initiatives to spread renewable energy as well as programs to save and conserve energy.

“Some might think it’s mission impossible to do what’s required,” May said at a news conference on Parliament Hill. “But we’ve costed the numbers. It’s mission possible, we can do it.”

She said further details would be released in the lead-up to the 2019 election campaign and that she would allow the numbers to be reviewed by Parliament’s independent budget officer.

May unveiled her plan as Liberals and New Democrats pushed for MPs to declare that Canada is facing a climate change emergency that threatens the country’s economy and ecosystems. She is also riding a wave of momentum that follows a stunning byelection victory by Green candidate Paul Manly in the B.C. riding of Nanaimo-Ladysmith, as well as a strong showing for provincial Greens in an April election in Prince Edward Island that saw the party form the official Opposition in a minority legislature.

May said that her party’s plan would require Canada to take a war-like stance to address climate change, by appointing a federal cabinet made up of politicians from different parties.

“We are in a climate emergency,” she said. “Climate change is not an environmental issue. It’s a massive security threat and it must be dealt with by government at all levels as a security threat that requires taking bold action. It’s best done if we can possibly do it in a non-partisan way, which is why in a time of war, the opposition parties were invited in the inner cabinet to make sure that decisions that were taken were not subject to becoming political footballs.” MORE

” While Liberals and Conservatives use the issue to beat each other up, a closer look shows that they actually have the same emission targets and the same love of pipelines, and that both parties will exempt the biggest polluters from paying a price.”
-Jagmeet Singh on climate change

Last Monday, New Democrats called on Justin Trudeau to declare an environment and climate emergency. Canadian communities are already paying the price of climate inaction and the NDP is calling on the Liberals to bring in strong measures to fight climate change.

“It’s increasingly clear that if we fail to act now to fight climate change, the costs will be immense. The Liberals’ policies – from continuing fossil fuel subsidies to buying and pushing for expansion of the Trans Mountain pipeline, to practically eliminating the carbon tax for some of Canada’s biggest emitters – are sending Canada in the wrong direction,” said NDP Leader Jagmeet Singh. “Canadians should be able to count on their government to have the courage to do the right thing on climate change, while creating good jobs and making life more affordable for Canadians.”

In addition to declaring a climate emergency, the NDP’s motion urges the Liberal government to bring forward a climate action strategy that prioritizes reconciliation with Indigenous peoples, sets ambitious targets with measures to hold the government accountable, takes concrete action to reduce emissions and invests in building the clean energy economy we need now.

“Justin Trudeau’s Liberals have adopted Stephen Harper’s weak targets, and those won’t even be reached for two centuries. And the Conservatives have no plan to tackle climate change. Tackling climate change means we all have to work together and we need to make sure no worker or community is left behind,” added Singh. “We have already started laying out our plan with our commitment to make all buildings – including homes – more energy efficient. This plan will save you money, create good local jobs and fight climate change. New Democrats have a proud tradition of fighting climate change and we will not stop. SOURCE