Climate change is now a top priority for Canadians. Keep pressure on politicians at the federal, provincial, and municipal levels to get serious about our climate emergency. Time is of the essence. Your letters are now more important than ever. 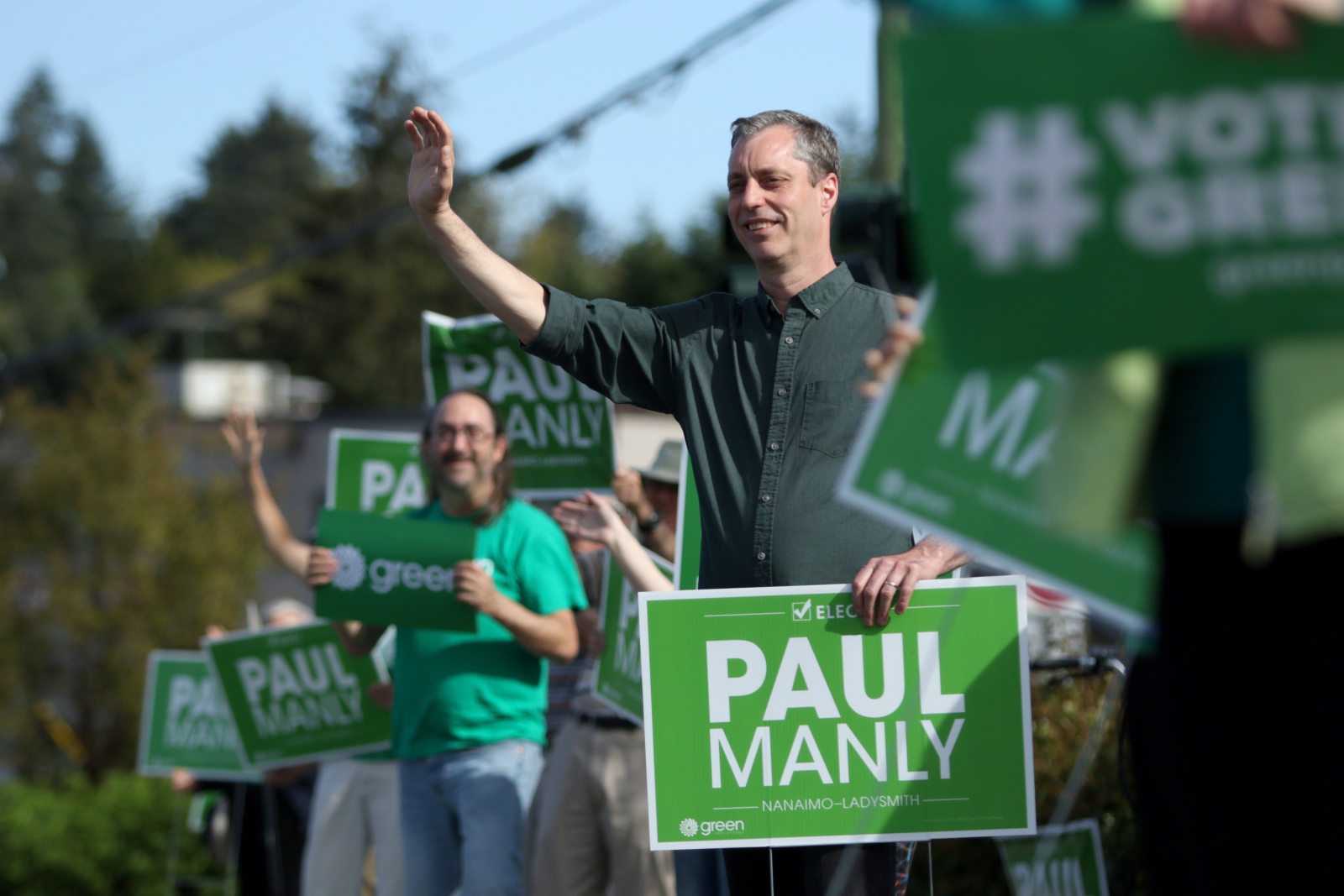 Green Party candidate Paul Manly takes part in a sign waving with supporters near his campaign office before the polls closed in the Nanaimo-Ladysmith byelection in Nanaimo, B.C., on May 6, 2019. Photo by The Canadian Press / Chad Hipolito

The historic election on Monday of a second federal Green Party MP shows that Canadians are taking the issue of climate change seriously and are looking outside traditional parties for solutions, say the leader of the federal Greens and the head of a public opinion institute.

Paul Manly won a resounding victory May 6 in a by-election for the Vancouver Island riding of Nanaimo-Ladysmith, capturing 37.3 per cent of the vote, 12 points ahead of the closest competition. The riding had been empty since January after former NDP MP Sheila Malcolmson resigned in order to run for the BC NDP in a race that she eventually won.

Manly, a documentary filmmaker, and son of former NDP MP and human rights advocate Jim Manly, is only the second candidate to ever win a seat as a federal MP under the Green Party banner, although there have been others who jumped to the party after winning.

His win comes two weeks after provincial Greens in P.E.I. captured over 30 per cent of the vote and secured eight seats. Since 2017, Greens have been elected in provincial caucuses in B.C. and New Brunswick and have elected their first Ontario MPP.

Canada is seeing an electorate that is “sick of the political classes” and is now putting climate change at the top of its priority list, said Shachi Kurl, executive director of the Angus Reid Institute. The Green Party is benefiting from the fact that climate change is now a major issue in the minds of people, she said.

A May 3 poll by the institute showed the Green Party breaking into double digits among decided voters, at 11 per cent, and “environment / pollution” identified as Canadians’ top priority for the country. “The polling is showing that they appear to be having a bit of a moment,” said Kurl of the party. MORE

Even as Canada is falling behind on banning plastics, the Green Party candidate for Bay of Quinte is looking to ban single-use plastics. Will the candidates from other parties move to protect the environment?  (See RELATED articles below.)

Climate-conscious shareholders who have long focused on fossil fuel damage are turning attention to another growing and related problem: plastics.

Pre-production plastic pellet, like these that spilled from a train car, have become a common pollution problem in oceans and waterways along with fragments of plastic bottles and containers. Credit: Rick Loomis/Los Angeles Times via Getty Images

Several of the largest producers of the fossil fuel feedstocks used to make plastics are being pressured by investors to explain what the companies are doing to reduce plastic waste in the world’s oceans and waterways.

Plastics represent a new direction for the activist shareholders, who for years have focused on greenhouse gas emissions from fossil fuels in their effort hold corporations responsible for the environmental fallout of their industries.

By turning attention to plastics, the investors hope to kick-start a conversation with the industry that will provide a realistic view of the size and scope of the plastics problem, exemplified by the millions of tons of garbage left behind to float in the oceans when plastics are not recycled.

Conrad MacKerron, senior vice president of As You Sow, a shareholder advocacy organization, said he was prepared for a stiff fight when his organization filed plastics-related shareholder resolutions this year with Exxon, Chevron, Phillips 66 and chemical giant DowDuPont.

Instead, the oil giants agreed to address the plastics issue in exchange for the investors withdrawing their formal resolutions. The companies agreed to issue reports addressing the amount of pea-sized plastic pellets released into the environment annually during production. Called nurdles, they are produced by the billions to make nearly all plastic products. The companies will also assess the effectiveness of policies and actions to reduce the volume of their plastic materials contaminating the environment.

The resolution with DowDuPont could still go to a shareholder vote at the company’s annual meeting June 25. MORE

Canada falling behind on banning plastics

This is huge. “If nothing else, the biggest polluters, and the biggest cheaters, will be exposed. No company, no country, will be able to hide or fudge its numbers. The public will know how to find them.” A quote from the RELATED posting below. It’s well worth reading also. 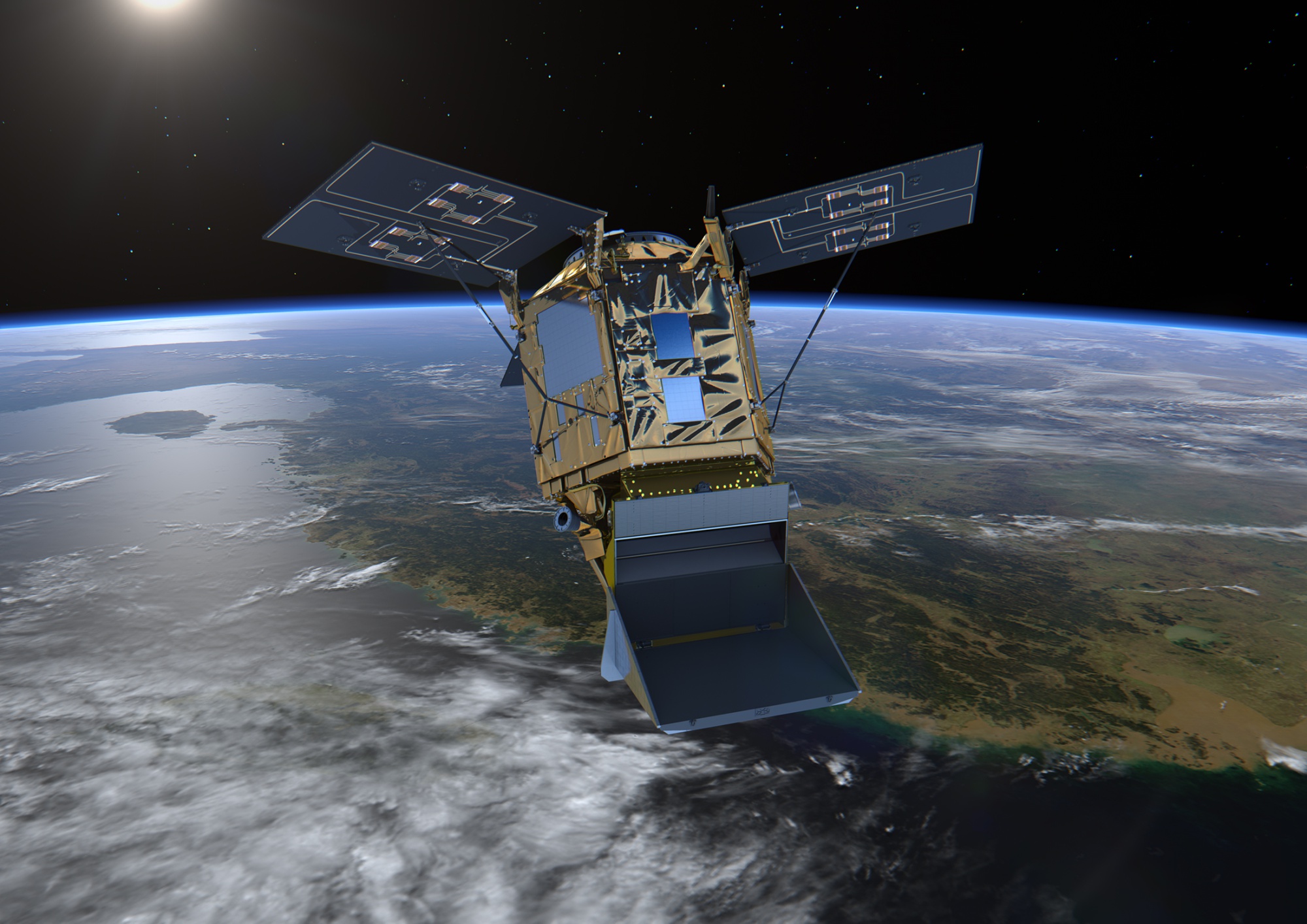 A wave of satellites set to orbit the Earth will be able to pinpoint producers of greenhouse gases, right down to an individual leak at an oil rig.

More than a dozen governments and companies have or are planning to launch satellites that measure concentrations of heat-trapping gases such as methane, which is blamed for about one quarter of man-made global warming. They are looking to track nations, industries, companies and even individual facilities to identify some of the biggest contributors to climate change.

“Space-based technologies are allowing us for the first time to quickly and cheaply measure greenhouse gases,” said Mark Brownstein, a senior vice president at Environmental Defense Fund, which plans to launch its MethaneSAT in 2021. “Oftentimes both government and industry are not fully aware of the magnitude of the opportunity to cut emissions. With that data, they can take action.”

Regulators are taking note. California is partnering with Planet Labs Inc. on a satellite to help it “pinpoint individual methane plumes” from oil and gas facilities, as well as other sources such as landfills, dairies and waste water plants, Stanley Young, a spokesman for the state’s Air Resources Board, said in an email. Researchers have suggested that methane is underestimated in most inventories, he said.

California was the site of the largest natural gas leak in U.S. history in 2015 when a broken well outside Los Angeles owned by Sempra Energy released more than 100,000 tons of methane before being plugged, federal and university researchers said in a study published in Science the following year. The utility in August estimated costs associated with the leak at $1.01 billion.

The information may reinforce shareholder pressure on companies to disclose and reduce emissions. In September, Exxon Mobil Corp. joined the Oil and Gas Climate Initiative, which targets to cut aggregated upstream industry methane emissions by more than 20 percent by 2025, and Chevron Corp. said this year it plans to tie executive compensation to meeting emissions targets.

Leaks constitute energy that could otherwise be sold. Oil and gas firms can cut 40 to 50 percent of their methane emissions at no net cost, which in terms of climate impact, is the equivalent of shutting two-thirds of the coal-fired generation in Asia, according to Laura Cozzi, the International Energy Agency’s chief energy modeler.  MORE

We’ll soon know the exact air pollution from every power plant in the world. That’s huge.

This posting is part 3 of a series on the role of water justice movements in a post-capitalist economy. (Read blogs one and two.) Emma Lui writes, “We can learn from communities in Jacksonville, New York, South America, and globally that have begun the inspiring work of transitioning to the next economy.”

Emma Lui is an activist, a writer and a contributor to the book, Corporatizing Canada: Making Business out of Public Service.Photo: Jonny White/Flickr

If we think about where power is manufactured and deployed, it is helpful to think about actual sites of struggles.

Examples of communities contesting power include Climate Strike rallies on Parliament Hill, legal challenges against the Trans Mountain pipeline, the Tiny House Warriors with their mission to stop the Trans Mountain pipeline from crossing unceded Secwepemc Territory, as well as creative actions at the Canada 2020 LNG event and at Catherine McKenna’s recent town hall.

It is also helpful to think about other areas where neoliberalism and capitalism, broadly, are strengthened, reinforced, and advanced:

It is important to think about and contest power structures at these sites and areas in order to advance water justice, climate justice, social justice, Indigenous rights, and human rights more generally.

At the same time, we need to be working to create the next economic system.

Writer and activist Rev. angel Kyodo williams points out, “…why has our imagination been stolen by capitalism in such a way that we can’t even imagine a different possibility for different economies and different ways of trading and being in relationship to one another?”

This creates opportunities to imagine and explore ideas — some that have long been discussed and debated as well as new ones — for the next economic system. MORE

We avoid  acknowledging environmental pain, but it turns out that it is a necessary stage that  one moves through to explore possibilities and eventually to practical action. Saying no really is not enough. 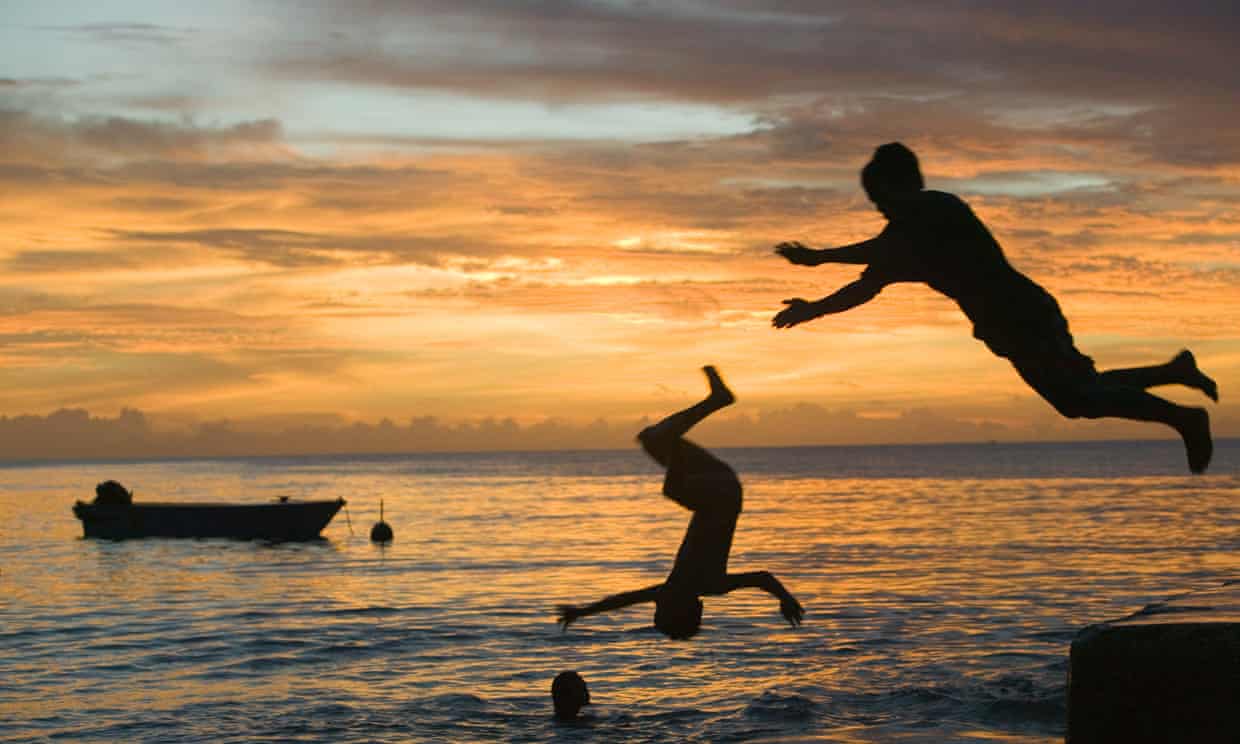 This reality is taking its toll on our mental health, especially among younger people who are understandably losing hope for their futures on a hotter planet.’ Photograph: Global Warming Images/REX/Shutterstock

‘Human society under urgent threat from loss of Earth’s natural life.’ ‘The planet has seen sudden warming before, it wiped out almost everything.’

These are some of the headlines that bombard us at ever-increasing rates.

Each day new reports and household names such as David Attenborough warn of “irreversible damage to the natural world and the collapse of our societies”. The United Nations says we have 12 years to avoid climate catastrophe. We are also amidst the world’s sixth mass extinction, the worst since the time of the dinosaurs.

This reality is taking its toll on our mental health, especially among younger people who are understandably losing hope for their futures on a hotter planet. We are seeing the rise of what is known as climate or ecological grief. This grief summarises feelings of loss, anger, hopelessness, despair and distress caused by climate change and ecological decline.

…Eco-psychologist Joanna Macy teaches useful frameworks for facing up to disturbing realities and finding capacity for action. First there is the gratitude stage, which focuses our attention on those aspects of life and the world that nourish us. Then there is a stage that honours the pain that we are experiencing. The third and fourth stages relate to exploring new possibilities and finding practical actions to take.

The second stage of “honouring the pain” is one that is often skipped over, as we naturally seek to protect ourselves from negative feelings. But making space for grief can help us confront the reality we face head on, and instead of just looking on the bright side, find a way to move forward. MORE