AMY GOODMAN, DEMOCRACY NOW!: On Wednesday, the House of Commons became the first parliament in the world to declare a climate emergency. The resolution came on the heels of the recent Extinction Rebellion mass uprising that shut down Central London last month in a series of direct actions.

Labour Party Leader Jeremy Corbyn told Parliament, “We are witnessing an unprecedented upsurge of climate activism, with groups like Extinction Rebellion forcing the politicians in this building to listen. For all the dismissive and defensive column inches the processes have provoked, they are a massive and, I believe, very necessary wake-up call. Today we have the opportunity to say, ‘We hear you.’”

We speak with George Monbiot, British journalist, author and columnist with The Guardian. His recent piece for The Guardian is headlined “Only rebellion will prevent an ecological apocalypse.” Monbiot says capitalism “is like a gun pointed at the heart of the planet. … It will essentially, necessarily destroy our life support systems. Among those characteristics is the drive for perpetual economic growth on a finite planet.”

Capitalism as we know it is over. So suggests a new report commissioned by a group of scientists appointed by the UN Secretary-General. The main reason? We’re transitioning rapidly to a radically different global economy, due to our increasingly unsustainable exploitation of the planet’s environmental resources.

Climate change and species extinctions are accelerating even as societies are experiencing rising inequality, unemployment, slow economic growth, rising debt levels, and impotent governments. Contrary to the way policymakers usually think about these problems, the new report says that these are not really separate crises at all.

Rather, these crises are part of the same fundamental transition to a new era characterized by inefficient fossil fuel production and the escalating costs of climate change. Conventional capitalist economic thinking can no longer explain, predict, or solve the workings of the global economy in this new age, the paper says.

The amount of energy we can extract, compared to the energy we are using to extract it, is decreasing “across the spectrum — unconventional oils, nuclear and renewables return less energy in generation than conventional oils, whose production has peaked — and societies need to abandon fossil fuels because of their impact on the climate,” the paper states.

The shift to renewables might help solve the climate challenge, but for the foreseeable future will not generate the same levels of energy as cheap, conventional oil.

In the meantime, our hunger for energy is driving what the paper refers to as “sink costs.” The greater our energy and material use, the more waste we generate, and so the greater the environmental costs. Though they can be ignored for a while, eventually those environmental costs translate directly into economic costs as it becomes more difficult to ignore their impacts on our societies.

And the biggest “sink cost,” of course, is climate change.

“We face a form of capitalism that has hardened its focus to short-term profit maximization with little or no apparent interest in social good.”

Now here’s a sticker you can promote!

‘Climate change will cost us more’ declares the sticker, mimicking the one that gas stations must post 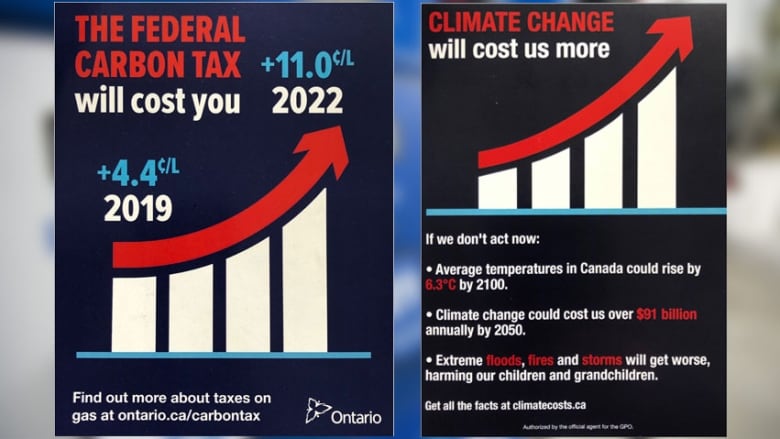 The Green Party of Ontario is unveiling its own version of the sticker Thursday, with a similar graphic design, lettering and colour scheme, but a completely different message about climate change.

Gas station companies that fail to post the government’s sticker on the pumps could face fines of up to $10,000 a day, under new legislation the Progressive Conservatives call the Federal Carbon Tax Transparency Act.

Green Leader Mike Schreiner said his stickers will be offered free to gas stations who want to display them alongside what he calls “the propaganda stickers being forced on them by Ford.” 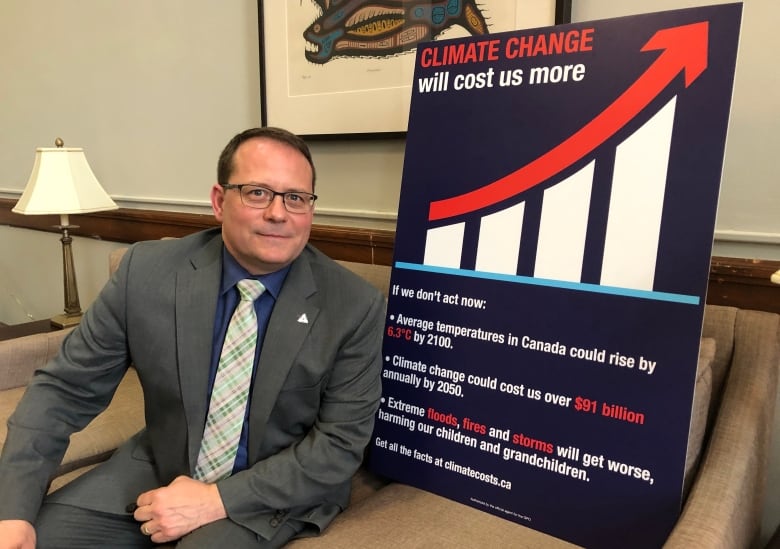 Green Party of Ontario Leader Mike Schreiner poses in his office with a poster-sized version of the sticker he wants to offer gas stations to post alongside the Ford government’s carbon tax stickers. (Mike Crawley/CBC)

The Canadian Civil Liberties Association says it intends to challenge the constitutionality of the law, claiming that it violates freedom of speech by compelling gas station owners to post a political message. MORE

This article lists several things you can do to reduce your family’s carbon emissions.  Switching to induction cooktops, heat pumps, and electric heating are options that result in far fewer emissions, and not a moment too soon.

To help solve the climate crisis, we need to electrify everything. 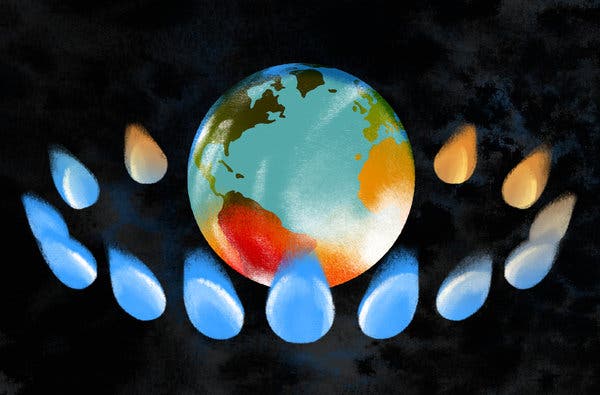 OAKLAND, Calif. — We have some good news that sounds like bad news: Your gas stove has to go.

We know how you’ll feel reading those words. We used to love cooking with gas, too. But if our society is going to solve the climate crisis, one of the things we must do is stop burning gas in our buildings.

Nobody is going to shed a tear about having to switch to a more efficient furnace or water heater. But people feel emotional about gas stoves, and the gas industry knows it. Seeing this fight coming, the industry is already issuing propaganda with gauzy pictures of blue flames.

What the gas companies will not tell you is that your stove is a danger not just to the world’s climate but also to your own family’s health. We’ll explain in a moment.

First, here’s the larger situation: The need to tackle climate change is beyond urgent. We are running out of time. Within the next decade we need to cut climate pollution in half in the United States, roughly, to do our fair part in preserving a livable planet.

Despite the Trump administration, the nation is actually making progress in some areas. We are retiring coal-burning power plants at a record pace, and half of them are already gone. A new wave of ambition to address climate change is sweeping across state legislatures this year as more and more commit to 100 percent clean electricity or debate doing so. But despite this progress, the Rhodium Group estimates that climate-altering emissions in the United States increased 3.4 percent last year from the year before, one of the biggest jumps in decades.

Burning gas is now a bigger source of such pollution than burning coal, and nearly a third of that gas is burned in homes and commercial buildings. But despite the rising chorus of climate pledges by state and local governments, none of them has really tackled the problem of gas in buildings. In fact, gas companies are still being allowed to spend billions extending new lines, connections that will have to be capped off long before the end of their useful lives if we are to meet our climate goals.  MORE

To reduce emissions we have to electrify everything. National policies will help, of course, but you can act on an individual level, as this piece in the New York Times explains –options you can take to protect your family’s health.

Environmental activists representing more than 200 organisations have called on the EU and the US to put an end to a booming transatlantic trade in fracked gas or face “taking the world far beyond safe climate limits”.

In an open letter to the EU Climate Commissioner Miguel Arias Cañete and US Energy Secretary Rick Perry, campaigners warn that the continued use and import of fracked gas “torpedoes critical climate targets and violates basic human rights”.

The statement comes after the US Department of Energy announced that Perry would be attending the first EU-US Energy Council High-Level Forum in Brussels on Thursday.

Critics are concerned the high-level energy meeting, titled “Towards large-scale US Liquified Natural Gas (LNG) exports to the EU’s gas market”, will pave the way for fracked gas to become a key part of a new transatlantic trade agreement between the EU and the US.

The rapidly growing US natural gas export market has benefitted from a push in large-scale fracking projects which led to an increase in LNG production. US gas now represents around 12 percent of the EU’s total LNG imports. MORE