Climate chaos is upon us. A recent report from the Intergovernmental Panel on Climate Change concluded that preventing climate catastrophe will require “rapid, far reaching and unprecedented changes in all aspects of society”. We need a clear plan to transition away from our current destructive energy and economic systems, which are based in exploitation and extraction, and into systems that are sustainable and just. And we need it now.

This document seeks to demonstrate how Canada can be a leader in creating comprehensive solutions to the climate crisis.

Canada is one of the highest per-capita emitters of carbon dioxide in the world. We’re one of a handful of rich countries that set the technological, economic and social patterns for what the planet’s poor majority see as a good life. We continue to benefit from the massive extraction and burning of fossil fuels. As such, Canada has a triple responsibility to put new ways of doing things into practice. Through bold action, we can transform the Canadian economy and become a global leader in responsible and sustainable energy production.

This task presents us with a historic opportunity to tackle many of our interlocking problems together, by challenging the exploitative nature of our current economic system. This is the promise of the Green New Deal. Its key insight is that for a climate transition to really work, it has to work for everyone: this means redistributing wealth and resources away from harmful activities and those who seek to profit from them, and giving regular people a say in who wins and loses as we move away from fossil fuels.

The just transition isn’t just from fossil fuels to renewables. It means removing the economic incentives and structures that got us to this crisis point, so that we don’t fall back into the same trap in the future.

And while everyone will benefit from a Green New Deal, the transition must address the structural inequalities and improve lives in communities marginalized by the current system. A just transition must confront and undermine the xenophobia and anti-migrant sentiment that are the hallmarks of reactionary forces.

In short, from blind faith in the market to a clear vision of a good life for all. To that end, here’s are some key pieces we see a serious version of the Green New Deal in Canada including: MORE

The party’s future has been limited by the view it couldn’t win seats. PEI is just the latest example of a changing reality. 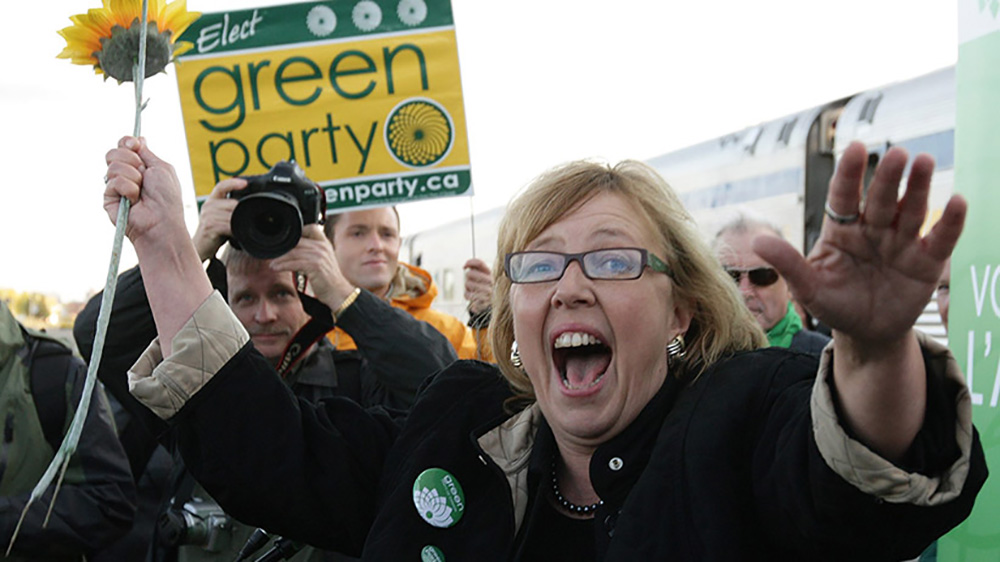 The October election might give Green Leader Elizabeth May something to cheer about, says Matto Mildenberger. And next week’s Nanaimo-Ladysmith byelection could be a good indicator of the party’s chances. Photo: Darryl Dyck, the Canadian Press.

There isn’t a bigger environmental politics story in the world right now than the extraordinary results by the Green Party in the recent Prince Edward Island election.

For some observers, the eight seats nabbed by Peter Bevan-Baker’s party were unsurprising. The Greens led in most pre-election polls. Bevan-Baker has consistently been ranked the province’s most popular politician.

Don’t let these facts distract from the party’s singular achievement in becoming Her Majesty’s Loyal Opposition. Its P.E.I. breakthrough built on waves of recent Green Party wins across Canada. And it foreshadows the party’s serious prospects at the federal level this fall.

…Most people underestimate how common pro-environment opinions are within their communities. Even people who personally want climate action think the public is less green than is actually the case. MORE

Proposals for Green Deals vary in how much they discuss the growth of the economy. Often missing in these discussions is the realization that growth can be life-affirming or result in the destruction of life. It’s a crucial distinction. The Green New Deal has gone mainstream. The idea is to combine a massive federal job creation program with bold action to rapidly shift away from fossil fuels and protect Indigenous rights. Long a buzzword in the U.S. Green Party, a Green New Deal resolution was introduced in February by insurgent Democrats like Alexandria Ocasio-Cortez, who’ve solidified its scope and demands. Now, Canadian leftist organizations like Courage are presenting their own proposals for a “Green New Deal of the North.” And in March, federal NDP leader Jagmeet Singh began voicing support for the Green New Deal idea.

But some are wary of proposals like the Green New Deal – they say that it only “greens” the capitalist imperative of perpetual economic growth, which is the true cause of environmental destruction. [This ignores the reality that growth can be either life affirming OR destructive to the planet.]

Degrowth is mostly an academic movement, focused on challenging mainstream economics. There have been some degrowth policy proposals, but there is not always agreement in the movement about those policies. The Green New Deal, in contrast, is mostly a policy platform. Those who back it and worked on it may be academics and activists, but the focus is on putting together a visionary set of policies.

Neoliberal economic philosophy wants minimum government, regulation and services, minimum taxation, and the removal of all impediments to business’ efforts to maximize profits. Doug Ford is proclaiming Ontario is ‘open for business’. His government is an example of extreme neoliberalism. The other side of the coin, social democracy, proposes government is for people. It champions the plight of folks struggling with housing, those stuck in bad jobs with poor pay, families depending on public education to help their kids get ahead, and the sick.

If there’s one thing top of mind for most folks, it’s the cost of living. Recent polling commissioned by the Broadbent Institute showed that whether it’s housing, healthcare, or simply paying for daily basics like food, Ontarians and the rest of Canada are worried that their largely stagnated incomes just can’t keep up. And they expect their government to start doing much more to make life affordable.

When Doug Ford rolled into office last June on a simple and effective slogan: “For the People”, many expected that under his rule their affordability concerns would be answered. Within the first few months however a pattern started to form of choices and policies that benefit special interest groups, while making life for the rest of us less affordable. This budget is yet more proof that Premier Ford will end up costing most folks more.

More healthcare costs on the way

It started on his second day in office when it was quietly announced that pharmacare for those under 25 was cancelled, closing the door on the promise of pharmacare for the rest of us. It’s a good deal for drug companies and insurers who make more money off of a fractured system of largely private coverage, where little is being done to control drug costs and premiums. It’s a crappy deal for the rest of us who continue to see our out-of-pocket costs for medications rise.

Yesterday’s budget plans to “save” another $200 million through the PC Government’s controversial plan to merge Health Units, but details are non existent and it’s always dangerous to cut a critical service like healthcare before identifying where the money will come from. Many public officers of health are saying it will likely mean less locally responsively service for people. MORE

Canadians, pleasant and conflict-averse, can’t bring themselves to say to Alberta, ‘you simply can’t dig up all that oil and burn it, it by itself will use up a third of the planet’s carbon budget.’  So they’ve never been able to really grapple with climate change. Look at the tragic positions that Justin Trudeau has gotten in trying. – Bill McKibbon

The author argues the pipeline to B.C. is folly and Canada risks being ‘a great source of destruction’ 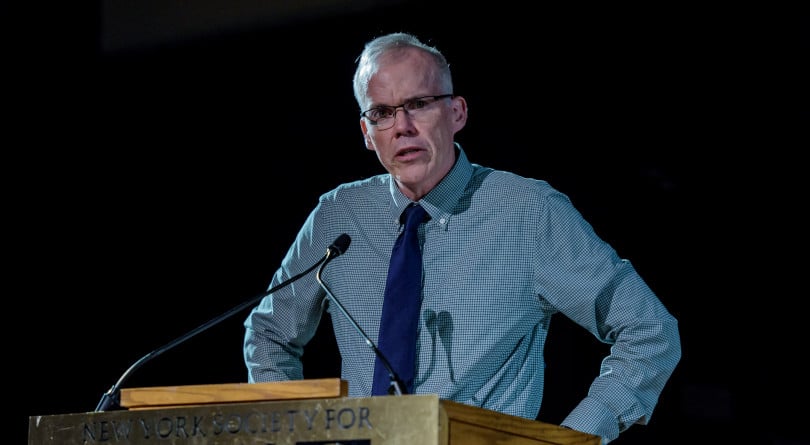 Bill McKibben, founder of 350.org and author of “DRAWDOWN: The most comprehensive plan ever proposed to reverse global warming”. (Erik McGregor/Pacific Press/LightRocket/Getty Images)

Thirty years ago, Bill McKibben wrote the first book on climate change for general readers, The End of Nature; it didn’t save the world, but McKibben hasn’t stopped trying. The Vermont-based author and activist’s new volume, Falter: Has the Human Game Begun to Play Itself Out?, explains, in compelling prose and with devastating detail, the magnitude of the risks posed by carbon emissions—and also unregulated genetic engineering and artificial intelligence. He acknowledges the difficulty of making change when vested interests in fossil fuels and big tech have so much leverage.

However, McKibben does offer a scintilla of hope, based on the widespread adoption of green technology, the acceptance of regulation, and the power of non-violent protest movements. On the phone from San Diego, where he was fundraising for his grassroots environmental organization, 350.org, McKibben spoke with Maclean’s about how the human species may be able to survive its suicidal impulses.

Q: In April, you were in Toronto, delivering the Robert Hunter Memorial Lecture, and you spoke in Vancouver. What are your impressions of how Canada is prepared—or unprepared—to help stop the human game from playing itself out?

A: Canada’s got some of the very best climate activists, experts and policy people in the world. And it has a government that’s rhetorically, and in certain respects actually, committed to being a leader on climate change and carbon taxes. But Justin Trudeau said in Houston a couple of years ago, “No country would find 173 billion barrels of oil [in the ground] and just leave them there.” And so, Canada is committed to using up about a third of the remaining carbon budget [we can emit before what] the scientists say is a catastrophe. If Canada’s determined to dig up the oil underneath the oil sands and ship it around the world to people who will burn it, then Canada is inevitably going to be a great source of destruction. We can’t afford to have Canada do that, any more than we can afford to have the U.S. dig up all the coal in the Powder River Basin or have Brazil cut down all the trees in the rainforest. MORE