The B.C. government is backpedalling on a commitment to enact an endangered species law in 2020, sparking concern from scientists who say time is running out to save the province’s 1,800 species at risk.

The environment ministry confirmed that a plan to introduce legislation in 2020 — already pushed back from 2019 — is off the table but provided no details about why.

“As a scientist, it’s very hard for me to watch as populations blip out, to see these declines year after year and think that we as a society are not taking responsibility to prevent that from happening. she said. We’re the ones on watch. And we are watching as species decline.”

Scientists say our planet is in the midst of its sixth mass extinction of plants and animals and is experiencing the most rapid loss of species since the elimination of the dinosaurs 65 million years ago. Scientists estimate as many as 30 to 50 percent of all species may be headed toward extinction by 2050. MORE

‘It just takes too damn long’: How Canada’s law for protecting at-risk species is failing

Extinction Rebellion activists took over part of the Natural History Museum as the climate change protest entered its second week. 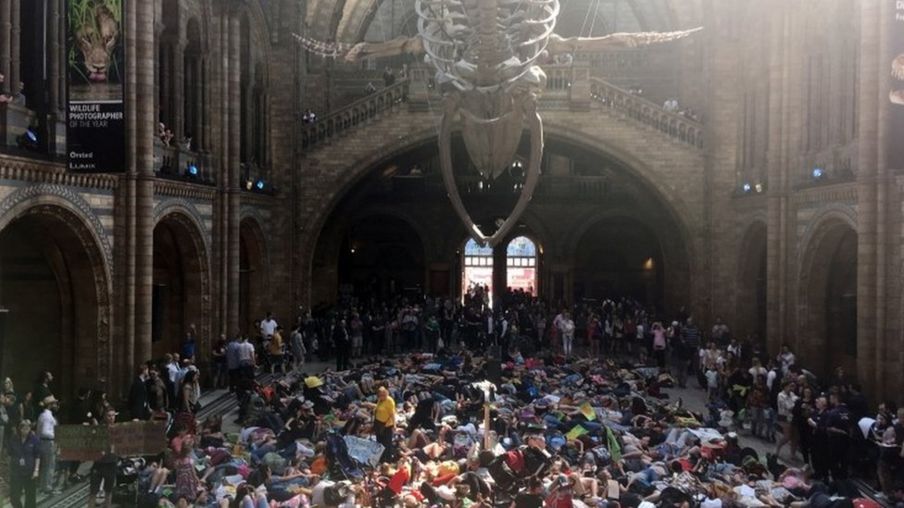 About 100 people lay down under the blue whale skeleton at about 14:15 BST.

It comes as more than 1,000 people have been arrested since the protests began in central London a week ago.

The climate change group are now based in Marble Arch, after police moved protesters from Oxford Street, Waterloo Bridge and Parliament Square.

Extinction Rebellion said it hoped the protest at the museum, which it called a “die-in”, would raise awareness of what they call the “sixth mass extinction”.  MORE

Breaking the law is the future of climate protests

This tribute to Polly Higgins by George Monbiot appeared in The Guardian, Mar 28.  On Apr 21 came the news that Polly had passed away. Monbiot wrote

““If this is my time to go,” she told me, “my legal team will continue undeterred. But there are millions who care so much and feel so powerless about the future, and I would love to see them begin to understand the power of this one, simple law to protect the Earth – to realise it’s possible, even straightforward. I wish I could live to see a million Earth Protectors standing for it – because I believe they will.”

Businesses should be liable for the harm they do. Polly Higgins has launched a push to make ecocide an international crime 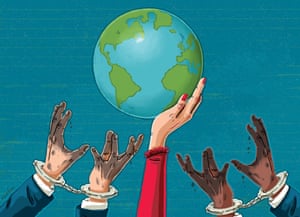 Why do we wait until someone has passed away before we honour them? I believe we should overcome our embarrassment, and say it while they are with us. In this spirit, I want to tell you about the world-changing work of Polly Higgins.

She is a barrister who has devoted her life to creating an international crime of ecocide. This means serious damage to, or destruction of, the natural world and the Earth’s systems. It would make the people who commission it – such as chief executives and government ministers – criminally liable for the harm they do to others, while creating a legal duty of care for life on Earth.

It would force anyone contemplating large-scale vandalism to ask themselves, ‘Will I end up in the Hague for this?’

I believe it would change everything. It would radically shift the balance of power, forcing anyone contemplating large-scale vandalism to ask themselves: “Will I end up in the international criminal court for this?” It could make the difference between a habitable and an uninhabitable planet.


From Ecocide to Ecolibrium: The Great Turning | Polly Higgins | TEDxUppsalaUniversity

In the face of a growing raft of evidence that increasingly points to an imminent global catastrophe—the very self-destruction of humanity, even—one means of taking concrete action, as opposed to fatalism and denial, is to promote new legal frameworks that can structure debate and action on this issue. Valérie Cabanes shows that defining the concept of ecocide is the first key step along this road.

The Earth needs the adoption of the Crime of Ecocide to be adopted by the International Criminal Court as the fifth Crimes Against Humanity. This law would have the effect of preventing ecocide as humanity accepted our property role as trustees of life.

The destruction of the Earth’s ecosystem by industrial technologies that show no respect for living things is tantamount to mortgaging the living conditions of current and future generations. It is vital that the people (and legal entities) that are actively responsible for this destruction should be prosecuted when their decisions affect the integrity of life, and therefore the safety of the planet. The crime they commit is that of ecocide—in a sense, the original crime; the crime that destroys the very conditions for habitability on Earth. For several decades now, a series of actors have been seeking to ensure that the intrinsic value of nature and the right of ecosystems to exist are recognized, by inventing the legal means to defend them in court.

In 1986, Doudou Thiam, the Special Rapporteur tasked by the International Law Commission with submitting a draft statute establishing the future International Criminal Court (ICC) to the United Nations General Assembly, suggested that the list of crimes against humanity should be supplemented by a provision making violations of the rules governing environmental protection punishable acts. The text he proposed in Article 12 (“Acts constituting crimes against humanity”) of his draft reads as follows:

The following constitute crimes against humanity: […] Any serious breach of an international obligation of essential importance for the safeguarding and preservation of the human environment.

The Special Rapporteur added the following comment: “It is not necessary to emphasize the growing importance of environmental problems today. The need to protect the environment would justify the inclusion of a specific provision in the draft code.”