“It is to be able to generate more and to make sure that we’re investing in working-class Americans so that we all can afford to have more in life,” she added, referring to deal’s goal of investing in eco-friendly jobs to combat climate change and achieve an economy that relies on 100 percent renewable energy.

The plan has attracted support from some 2020 Democratic presidential hopefuls, but has faced criticism from conservatives and skepticism from moderate Democrats over its scope and potential impact on the economy. Ocasio-Cortez introduced a resolution in the House last month outlining the goals of the Green New Deal.

Republicans have seized upon an initial draft of the plan that included provisions about eliminating air travel, guesswork surrounding cows’ flatulence and economic security for those who are “unable or unwilling to work.”  MORE

There is a better way to reduce harmful emissions. 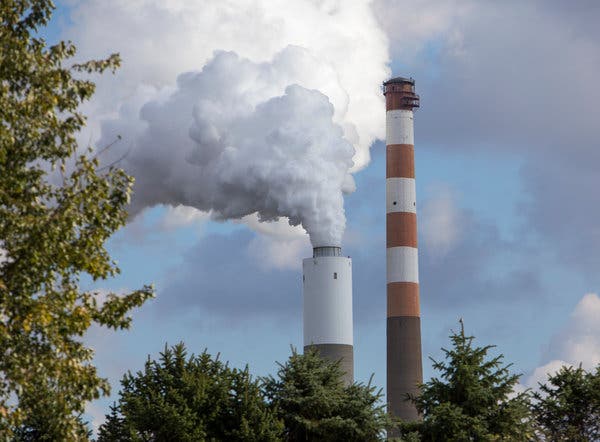 Yes, of course, we need a Green New Deal to address the world’s most urgent crisis, global warming.

Just, please, not the one that a flotilla of liberal politicians, including seven of the top Democratic presidential hopefuls currently in the Senate, are signingup for in droves, like children following the pied piper in the old legend.

Our modern-day pied piper, Representative Alexandria Ocasio-Cortez, is trying to lure us into a set of policies that might help save the planet but at the cost of severely damaging the global economy.

…Fortunately, there is a better way to address the climate problem at far lower cost to the economy: a tax on greenhouse gas emissions. That can be imposed in any number of ways. The 18.4 cent federal gasoline tax, for example, hasn’t been increased since 1993 even as most other developed countries impose far higher levies.

A particularly thoughtful proposal has come from the Climate Leadership Council, a bipartisan organization that counts more than 3,300 economists among its signatories. Elegant in its simplicity, the key provision would be the imposition of an escalating tax on carbon. At an initial rate of $43 per ton, the levy would be roughly equivalent to 38.2 cents per gallon of gasoline. MORE

A new analysis finds that the environmental cost of raising cattle is very, very high.

The newest version of the Impossible Burger–the plant-based meat that uses food science to replicate the taste and feel of beef–has a carbon footprint 89% smaller than a burger made from a cow.

A new  analysis found that the burger also uses 87% less water than beef, uses 96% less land, and cuts water contamination by 92%. Those numbers are improvements on the last iteration of the burger, in part because the company has become more efficient as it grows and because it switched from wheat to soy as a key ingredient, because soy also yields more acres on a farm. But the majority of the impact simply comes from the fact that the product isn’t made from an animal.

“The best, fastest, easiest way to make meat more sustainable is to avoid the cow,” says Rebekah Moses, senior manager of impact strategy at Impossible Foods. “By making the Impossible Burger directly from plants, we have the luxury of bypassing the most inefficient stage in the entire food system.” Cows are known for their greenhouse gas-producing burps–the largest source of methane emissions in agriculture–but also require cattle feed that takes large amounts of land, water, fertilizer to grow, and often leads to deforestation. The cow’s manure is also another major of source of pollution.

The life-cycle analysis, which was verified by the sustainability consulting group Quantis, looked at each part of the plant-based burger’s production, from the water and energy used to produce heme, the ingredient that gives the flavor a blood-like taste, to the resources used to grow other ingredients like soy and potatoes, and produce the packaging. The product uses 4% of the land needed to produce beef. “That’s a very, very conservative estimate on our part–most cattle globally require far more land than that estimate,”Moses says. “It’s completely inefficient, and it’s why beef is the leading cause of deforestation in the Amazon. If most of the land that’s used for cattle feed were to be left alone, without the gassy animals, to re-vegetate and actually store carbon in trees and grasslands, it’s not an exaggeration to say that we could set the clock back on climate change through food choice alone.”

For an individual, the company calculated, swapping Impossible “meat” for a pound of ground beef saves seven pounds of greenhouse gas emissions, 90 gallons of water, and 290 square feet of land. Still, while some consumers might be choosing plant-based meat for environmental reasons, the startup isn’t relying on sustainability to sell the product. “What we really wanted was to create a delicious product that can compete with beef on taste and craveability,” she says. “That’s the primary motivator for most people, and that’s who we want to empower by providing a more planet-friendly option. Sustainability attributes are, for most consumers, a ‘nice to have’ in food choice, rather than the driving force of purchasing.” SOURCE

Recent climate strikes prove the youth are prepared to fight for the planet.  Image: REUTERS/Danish Ismail

The school climate strikes show that young people want to fight climate change, but their enthusiasm for collective action is largely untapped. A volunteer conservation army could mobilise their talent and passion by channelling it into work to restore ecosystems.

The Green New Deal has encouraged people to embrace radical solutions to climate change by sharing its name and ethos with the New Deal of the 1930s. President Franklin D. Roosevelt’s New Deal was a transformation of America’s economy which put thousands to work in manufacturing and redistributed wealth to help the country recover from the Depression.

One of the first and most popular programmes of the New Deal was the Civilian Conservation Corps (CCC) – a public work relief programme that enlisted millions of young men in conservation work throughout the natural environment of the US. Reviving the scheme could prove a popular and effective way for countries to mobilise the climate strike generation in environmentally beneficial work. MORE

About a hundred pairs of shoes sat around an Indigenous medicine wheel banner laid out at Toronto’s Nathan Phillips Square, as nearly 400 people gathered to commemorate the International Day for the Elimination of Racial Discrimination on Thursday, March 21.

Some of the shoes — including a child’s pair of pink sandals and battered Birkenstocks — were brought by migrant workers and refugees in Canada to “represent anti-racist and migrant struggles,” said organizers of the rally. The banner symbolized the fight for Indigenous self-determination.

Not far from the circle of shoes was a black board with photos — a makeshift memorial to the victims of last week’s shootings at two mosques in Christchurch, New Zealand.

As the sweet smell of incense wafted in the early evening breeze, people were invited to sign a pledge “to always confront anti-Muslim hatred, racism and xenophobia at home, in public, at my workplace and in laws and policies.”

The rally, organized by the Migrant Workers Alliance for Change and the Migrant Rights Network, was part of a co-ordinated action in over a dozen cities across Canada, including Montreal, Vancouver and Halifax.

The Migrant Rights Network — a new cross-Canada alliance of 36 grassroots migrant and refugee groups, labour unions and civil society organizations — said it would hold more rallies in the coming months to combat racism and fight for migrant justice. MORE

In the meantime, we are asking all current holders of military-style semi-automatic weapons and assault rifles to visit http://www.police.govt.nz. There they will find details of the weapons included in this ban. In the next 48 hours, a form will be available on this site that we are asking these gun owners to complete, identifying what banned guns they hold. The police will then arrange for these weapons to be handed over, and eventually destroyed. Details of the weapons handed back by owners that are covered by the ban will also be taken to ensure that fair and reasonable compensation is paid once the buyback is in place. If owners are unable to complete the online form, they are able to contact the police on the phone to arrange the handover of these now-banned guns…

Guns come in all shapes and sizes. Image: REUTERS/Sukree Sukplang

New Zealand’s ban on semi-automatic weapons has put guns, violence and regulation back in the spotlight, underscoring the different approaches taken by governments around the world and their relative success.

Prime Minister Jacinda Ardern outlined the plan after a gunman killed 50 people at two mosques in a city on the country’s South Island. The strengthened laws will prohibit military-style semi-automatics and assault rifles, as well as putting in place an amnesty for such weapons to be handed in and a buyback scheme.

“Our history changed forever,” Ardern said as she announced the changes. “Now, our laws will too.”

Australia’s 1996 gun-law reforms offered her a template. After a massacre in Tasmania killed 35 people, semi-automatic weapons, pump-action shotguns and rifles were removed from civilian possession, and firearm deaths fell. Even so, while evidence and academic studies suggest that the fewer people who have access to firearms, the safer a community is, gun controls remain controversial in some countries, most notably the US.

There are more than one billion firearms in the world and the majority are owned by ordinary people, according to the Small Arms Survey. It estimates that 85% are in civilian hands, 13% are in military arsenals and 2% are owned by law enforcement agencies.

The world is getting used to being told that Scandinavian countries are among the best places to live. The release of the 2019 World Happiness Report again confirms that impression with four Nordic countries in the top five happiest nations.

Finland, which headed the table last year, came top again, followed by Denmark, Norway (top in 2017) and Iceland. The Netherlands joined them in the top five. Switzerland, Sweden, New Zealand, Canada and Austria completed the top 10.

The US only made it to number 19, down from 18 last year. The UK was placed 15th, one ahead of Ireland with Pakistan ranked 67 and India 140 out of 156 nations surveyed. Two nations riven by civil strife, South Sudan and the Central African Republic were ranked as the least happy.