Gerald Butts was supposed to put the PM back together again. How did that go? 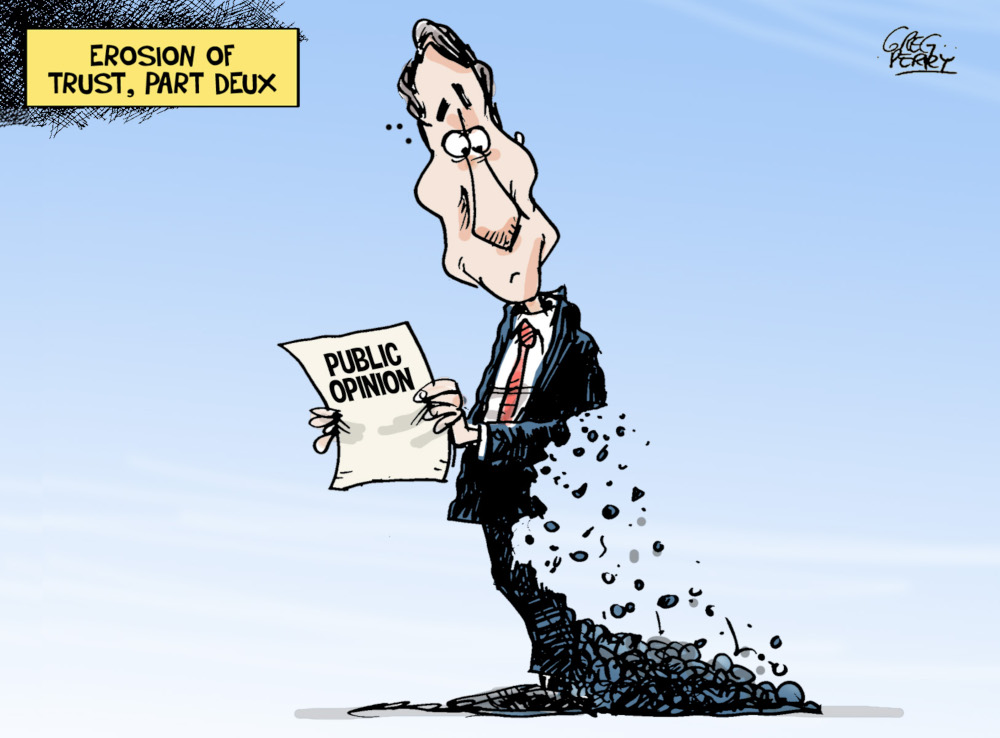 Last Wednesday must now seem like an excruciating eon ago to Justin Trudeau and his team. When Gerald Butts gave his testimony to the justice committee, the prime minister and his office no doubt pinned great hopes on the moment.

They needed people to feel reassured, or at least more bored. “Nothing happened here beyond the normal operations of government,” assured Butts in a normal and boring tone of voice.

He was Trudeau’s longtime friend, advisor and engineer of his rise to power, and he was not testifying under oath. Still, the gamble was that Canadians would give Butts’ account weight equal to the starkly different version by Jody Wilson-Raybould. Chalk the whole thing up to, as Trudeau himself put it the next day, “a difference of perspective.”

Then could begin the process of rebuilding Trudeau’s brand as the sunny, feminist, thoroughly modern man running an inclusive and transparent government worthy of re-election this fall.

So how has that worked out? Let’s review: MORE

On this week’s episode of the Victoria-based Out of Left Field podcast, independent journalist Zoe Ducklow (New York Times, The Tyee, Desmog Canada) joins the show to discuss indigenous rights & land claims, climate change and the role of activists in the struggle for a reconciliation.

A recent ruling aims to curtail conflicts of interest and corporate greenwashing via ‘creative sentencing,’ a legal tool used by the courts to offset pollution and other environmental harms

There’s been a major breakthrough in creative sentencing for environmental crimes in Alberta, with the Alberta Energy Regulator ordered to use an open-bidding process, rather than hand-selecting beneficiaries.

The creative sentencing mechanism allows judges to order penalties beyond fines when a company is found guilty of illegally polluting the environment. These penalties often include funding reclamation activities, scholarships or research projects.

Recipients of funds via creative sentences are usually selected behind closed doors by legal counsel, in a secretive system.

This was the case in 2010, after Syncrude Canada Ltd. was found guilty in the death of 1,600 ducks that landed on an oilsands tailings pond.

The University of Alberta, the Alberta Conservation Association and Keyano College were all approached privately about the prospect of receiving creative sentencing funds before being awarded $2.45 million in funding as part of Syncrude’s sentence.

But in response to a new ruling the Alberta Energy Regulator will take a different approach to creative sentencing in Syncrude’s latest conviction. 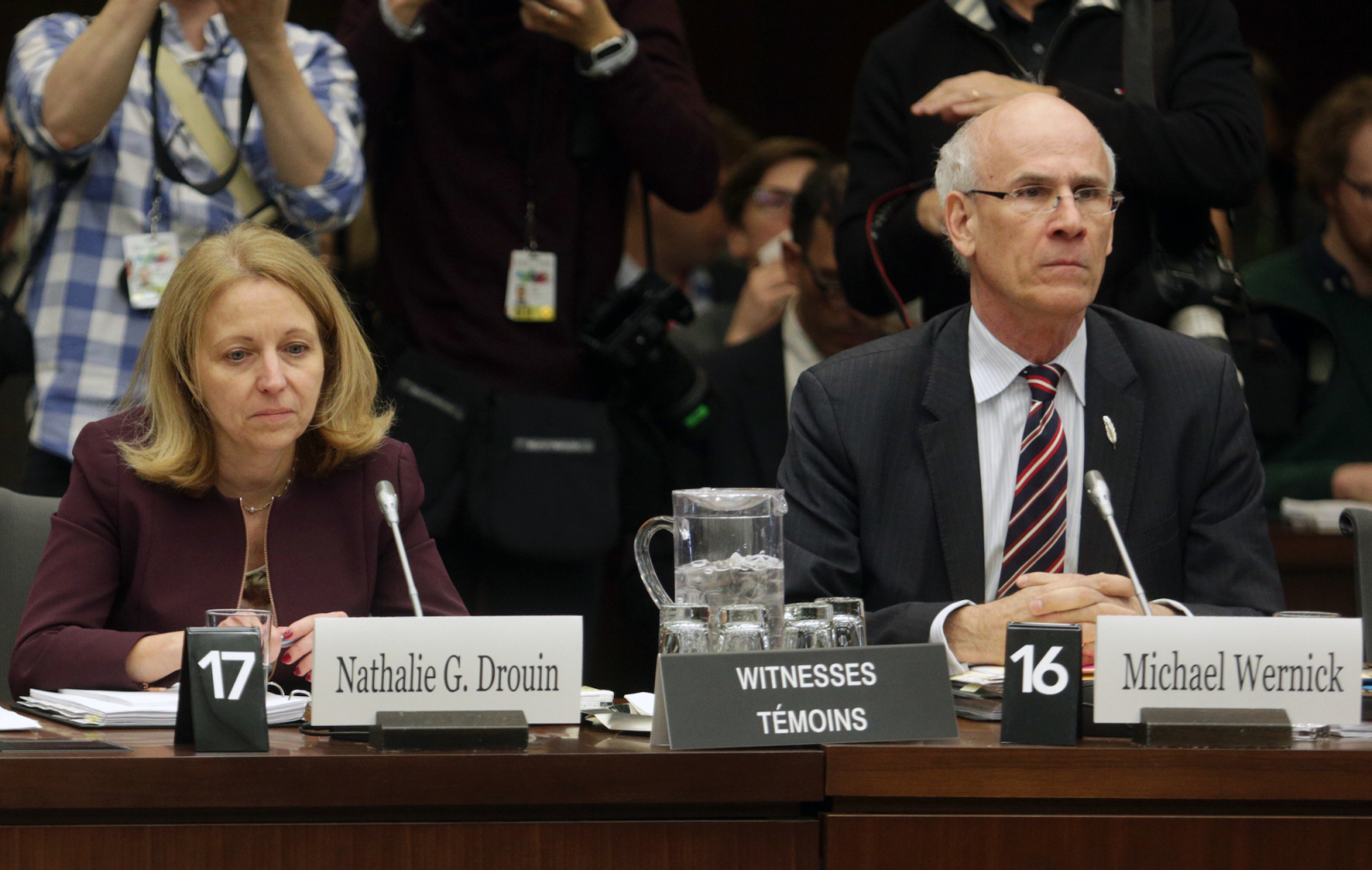 Michael Wernick, Clerk of the Privy Council, and Nathalie Drouin, Deputy Minister of Justice, appear as witnesses before the Standing Committee on Justice and Human Rights on Mar. 6, 2019. Photo by Andrew Meade

With the SNC-Lavalin scandal, it’s easy to miss the forest for the trees. The interpersonal drama. The dates. The evolving timeline, based on who recorded what, and who forgot when.

It’s as good as political theatre gets in Canada.

The ‘he said-she said’ of the SNC-Lavalin affair is a distraction from the real issue, @nolore writes: corporations in Canada have far too much political power, and clearly, rare is the politician who is willing to stand up to that power.

Amid the din of the details, a critical fact has been buried: the SNC-Lavalin affair is business as usual in Canada. Pro-business policies have long been the norm. It just happens to be that this time, Canadians get to see behind the curtain.

In 1998, French philosopher Pierre Bourdieu wrote The Essence of Neoliberalism, in which he argues that in order for free market capitalism to reign, the collective structures within a national state that impede free market logic must be weakened or destroyed. Therefore, public policies that aid corporations to maximize profits are relied on more and more, and markets are, either slowly or quickly, deregulated.

His essay identifies that with globalization came incredible capital mobility. Corporations no longer needed to be loyal and tethered to a single location, and instead could move where market forces were more favourable to maximize profits. Anything that gets in the way of this: unions, taxes or government policy, becomes the enemy of the free market, and must therefore be eroded. MORE 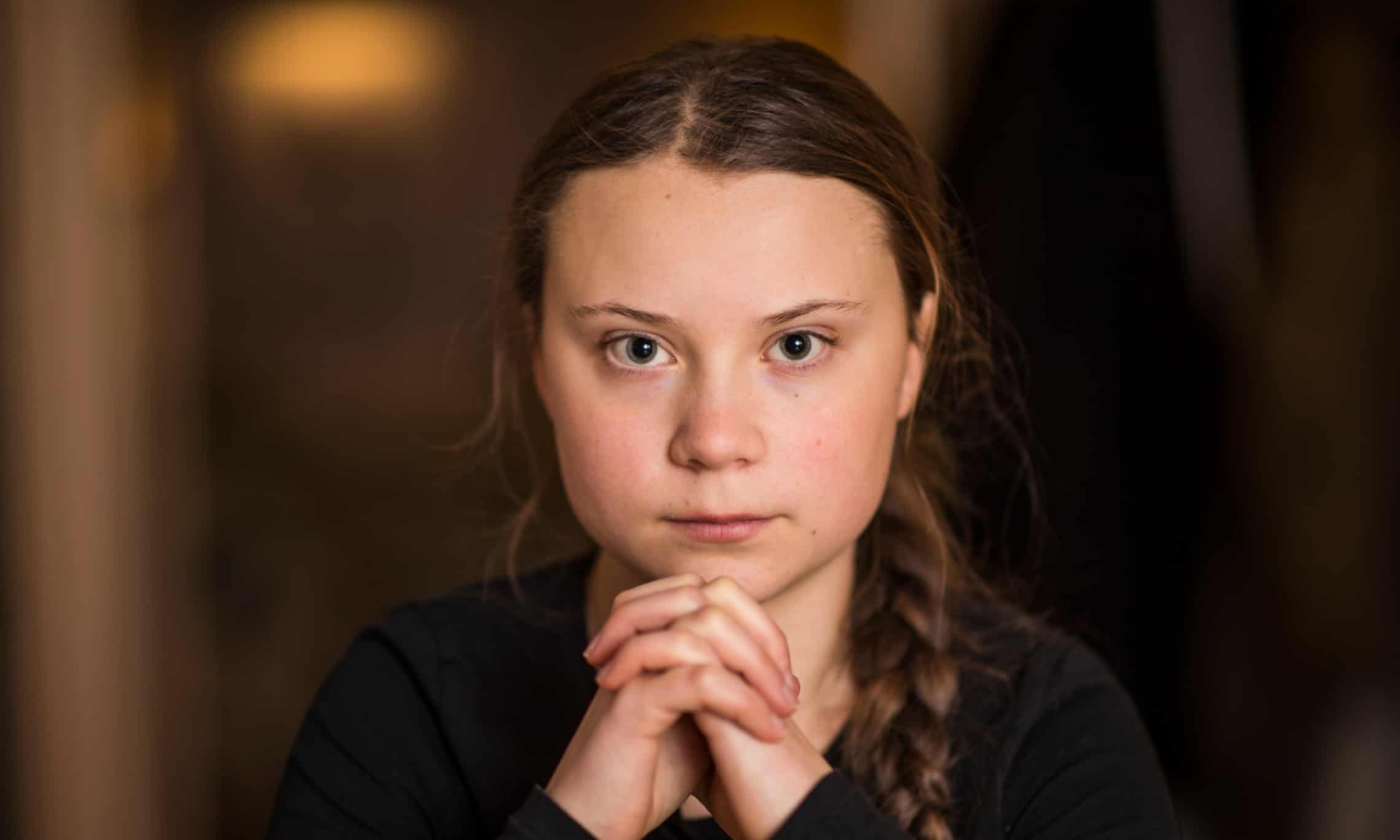 Greta Thunberg … ‘I have always been that girl in the back who doesn’t say anything.’ Photograph: Michael Campanella/The Guardian

Greta Thunberg cut a frail and lonely figure when she started a school strike for the climate outside the Swedish parliament building last August. Her parents tried to dissuade her. Classmates declined to join. Passersby expressed pity and bemusement at the sight of the then unknown 15-year-old sitting on the cobblestones with a hand-painted banner.

Eight months on, the picture could not be more different. The pigtailed teenager is feted across the world as a model of determination, inspiration and positive action. National presidents and corporate executives line up to be criticised by her, face to face. Her skolstrejk för klimatet (school strike for climate) banner has been translated into dozens of languages. And, most striking of all, the loner is now anything but alone.

On March 15, when she returns to the cobblestones (as she has done almost every Friday in rain, sun, ice and snow), it will be as a figurehead for a vast and growing movement. The global climate strike this Friday is gearing up to be one of the biggest environmental protests the world has ever seen. As it approaches, Thunberg is clearly excited. 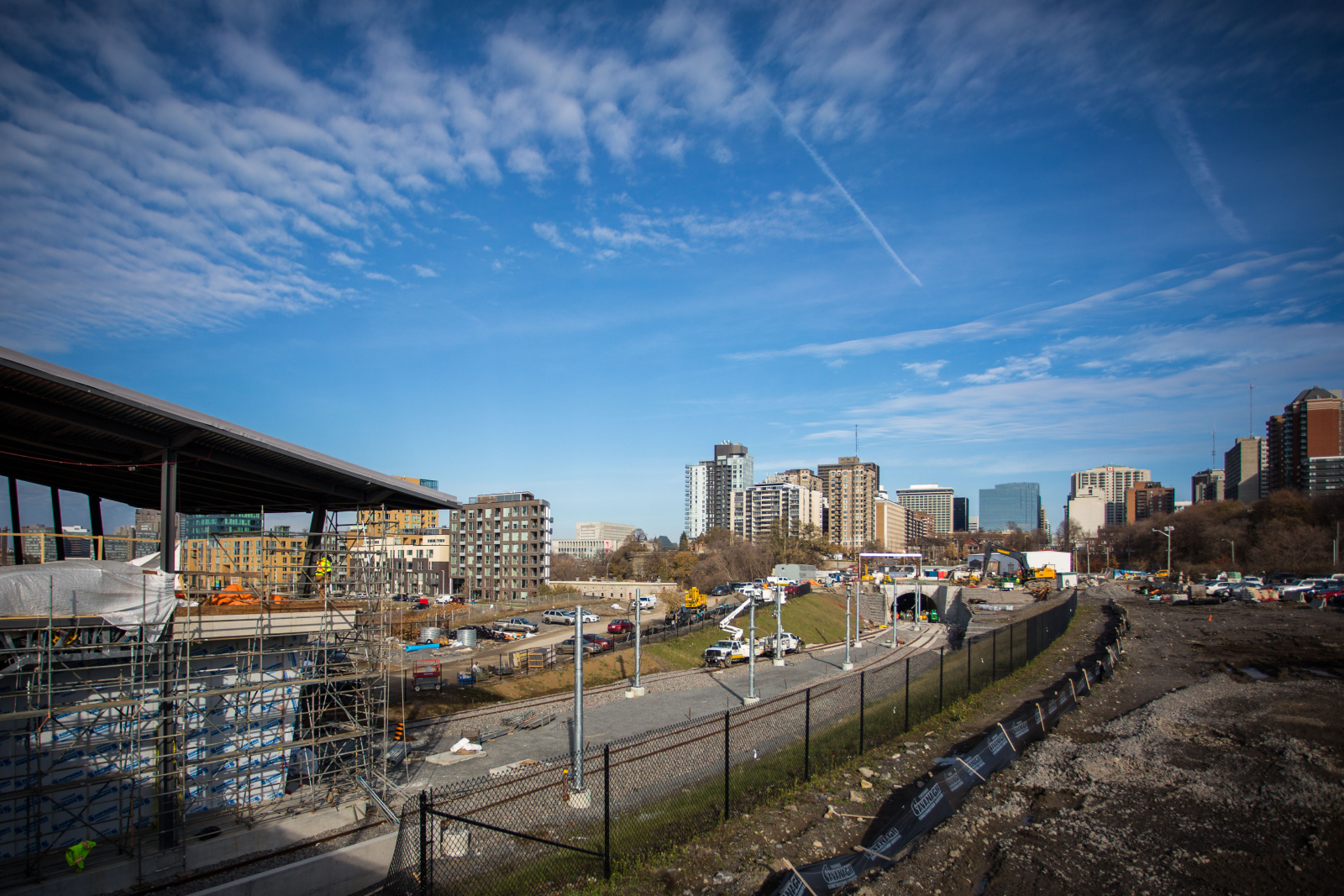 File photo of a light rail construction site at LeBreton Flats in Ottawa in 2017. SNC-Lavalin was a lead partner for Stage 1 of the city’s LRT project, which has been repeatedly delayed. Photo by Alex Tétreault

Four days after Prime Minister Justin Trudeau’s Liberals opened their first session of Parliament with a throne speech in 2015, the federal government entered into a new confidential deal with SNC-Lavalin.

The Quebec construction and engineering giant touted the deal in December of that year, noting that it would allow it to continue scoring lucrative public contracts with the federal government. But to this day, the details and content of this deal remain a secret.

The agreement is different from the deferred prosecution agreement (DPA) that former attorney general Jody Wilson-Raybould has testified she was improperly pressured into pursuing by the prime minister, his senior officials and the country’s top public servant.

Both agreements are meant to address the fraud and corruption charges hanging over the Montreal-based engineering firm. But while Wilson-Raybould’s replacement, David Lametti, is still considering offering a DPA, the administrative agreement was long ago successfully enacted. It remains on the books, more than three years later.

SNC-Lavalin also entered into a voluntary compliance agreement with the Commissioner of Canada Elections in 2016, in relation to a political contributions scheme that broke federal election financing laws.

The company agreed that “certain former senior executives” helped funnel $83,534 to the Liberal Party, another $13,552 to Liberal riding associations and $12,529 to 2006 party leadership hopefuls, along with $3,137 to the Conservative Party of Canada and $5,050 to Tory candidates and ridings. MORE

…Butts went on to insinuate that Wilson-Raybould was not up to the job of considering the SNC issue. He told the committee that she made her decision too quickly and, since deferred prosecution agreements were a new law that had never been applied before, any reasonable person would want a second legal opinion.

At this point, the double speak poisons Butts’ narrative because when there was criticism that the DPA regime was slipped into an omnibus budget implementation bill without study the government was quick to point out that it had consulted more than 370 participants and received 75 written submissions prior to enacting the DPA laws. Wilson-Raybould not only had the benefit of those submissions but the expertise of her department, a detailed briefing note from the prosecutors, SNC’s submissions and her own expertise.

Butts’ evidence that he just wanted Wilson-Raybould to consider other opinions stretches any notions of credulity. Butts suggested that they could seek a second opinion from former Supreme Court Chief Justice Beverley McLachlin. And what would McLachlin bring to the table on this issue — she has never dealt with the new remediation agreement provisions before either.

A second legal opinion, friendly newspapers articles and outside counsel are more clearly a tool of pressure to achieve a preferred result rather than some noble intellectual exercise. MORE 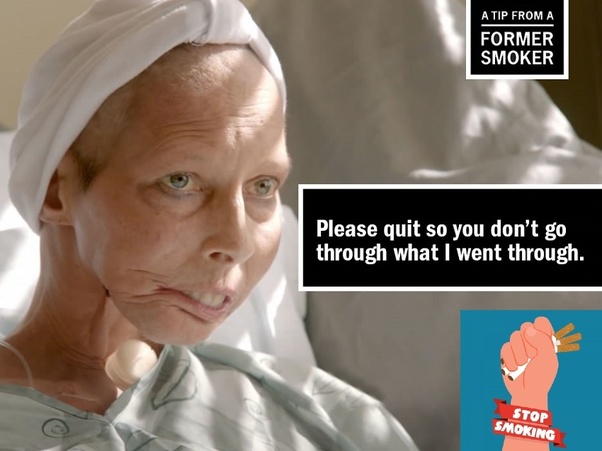 If you stop smoking, your risk decreases steadily each year.

Japan Tobacco Inc.’s Canadian unit was granted creditor protection by the Ontario Superior Court after a legal defeat over the risks of smoking threatens the existence of tobacco companies in the country.

The court extended protection in favor of JTI-Macdonald Corp. after the company argued that the damages award in the case of up to 1.77 billion Canadian dollars ($1.32 billion) exceeded its capacity to pay, Japan Tobacco said in a statement. JTI-Macdonald filed for protection from its creditors on March 8.

The Canadian units of British American Tobacco PLC, Philip Morris International Inc. and Japan Tobacco were ordered earlier this month to pay damages initially estimated at about CA$17 billion after losing an appeal over class actions filed by Quebec smokers. The total industry liability was later estimated at CA$13.5 billion. British American Tobacco said the ruling will hit its profit and set aside CA$758 million to cover damages, while Philip Morris cut its 2019 outlook.

JTI-Macdonald said the protection against creditors was its best option allowing it to continue doing business. The company said it will also proceed with an appeal to the Supreme Court of Canada.

While this case poses a risk, the industry faces even bigger headaches in Canada, where the country’s provinces are also suing the tobacco industry to recover health care costs. Ontario alone is claiming damages of CA$50 billion. MORE 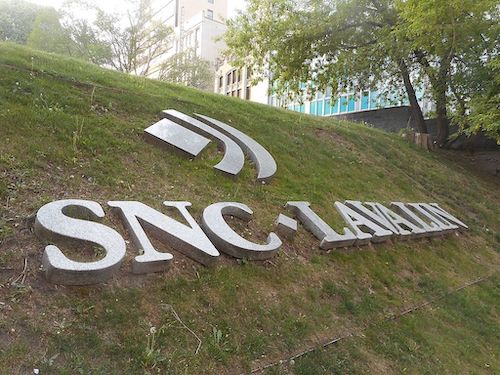 On the anniversary of the 2011 Fukushima nuclear disaster, investigative journalist Paul McKay reveals that the trade in radioactive waste is becoming a lucrative opportunity for SNC-Lavalin and its U.S. partner.

If it is true that one person’s garbage can be another’s gold, then Montreal-based multinational SNC-Lavalin and its new U.S. partner, Holtec International, plan to be big global players in what promises to be a very lucrative, long-term business: handling highly radioactive nuclear wastes until permanent disposal methods and sites might be found, approved, and built.

That problem is pressing because the volume of spent reactor fuel is cresting in the U.S., Canada, Europe, China, India, Russia, and Japan. There are also hundreds of intensively contaminated reactors which must sooner or later be entombed, dismantled, chopped up by robots, then sent in special, sealed containers to interim storage sites somewhere.

But no country in the world has yet found a proven, permanent solution for the 250 million kilograms of spent fuel now in limbo in storage pools and canisters, let alone the atomic furnaces which created them. There are now about 413 operable civilian reactors in 31 countries, and another 50 under construction.

So it bears examining just who is taking charge of the most dangerous garbage on Earth. Enter SNC-Lavalin and Holtec International. MORE