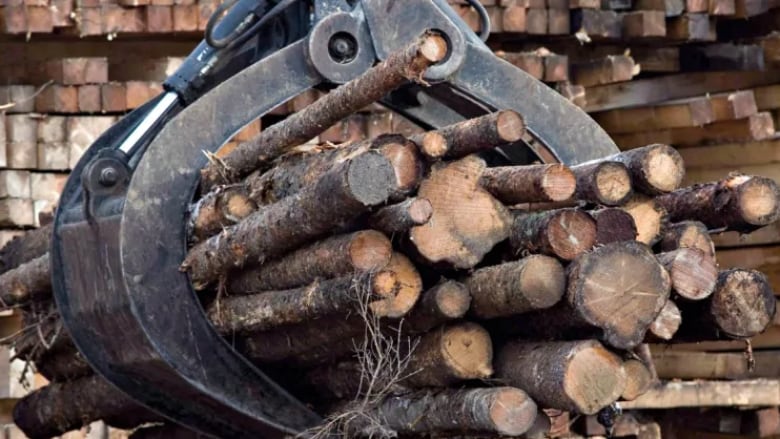 The goal of a new agreement is to have four First Nations create a proposal for an Indigenous-owned company that would eventually manage forestry in an area east of Lake Winnipeg. (CBC)

Four First Nations communities on the east side of Lake Winnipeg have signed an agreement with the province of Manitoba to explore an Indigenous-led commercial forestry opportunity.

The goal is to have the First Nations create a proposal for an Indigenous-owned company that would eventually manage, harvest and renew the area’s forest. They would then need to apply for a long-term licence after the two years.

“This agreement represents a strong step towards shared management of our natural resources and greater participation of Indigenous people in the economic development in eastern Manitoba,” Sustainable Development Minister Rochelle Squires said at an announcement Thursday. MORE PEACH BOTTOM, Pa. — As younger nuclear reactors across the Mid-Atlantic and Midwest are struggling to keep their own lights on amid a surge of cheap gas, one Pennsylvania plant is fighting a much more traditional source of extinction: old age.

Located in southeastern Pennsylvania near the Maryland border, the Peach Bottom Nuclear Generating Station wants to continue churning out electricity, much as it has done for the past 45 years.

To do so, its owner, Exelon Corp., needs to secure a federal license extension for its two reactors to enable the plant to operate out to 80 years. Without the extension, the plant will run up against a 60-year approval in 2033 and 2034, much like the nearly 100 other reactors across the country.

The Nuclear Regulatory Commission’s approval would represent an unprecedented length of time for a commercial plant to operate — a fact that has some critics warning about the public safety implications of an aging facility originally licensed to run for half that time.

Also looming large over the fate of the nearly 2,800-megawatt plant are growing climate implications.

Any meaningful national effort to curb the electric sector’s carbon emissions will likely need a lot of the carbon-free power produced by the existing nuclear fleet, already under economic attack from cheap natural gas, waning demand and cratering costs for renewables.

With limited new nuclear on the immediate horizon, some believe pushing the age of current reactors may be the needed bridge to a zero-carbon energy future. MORE 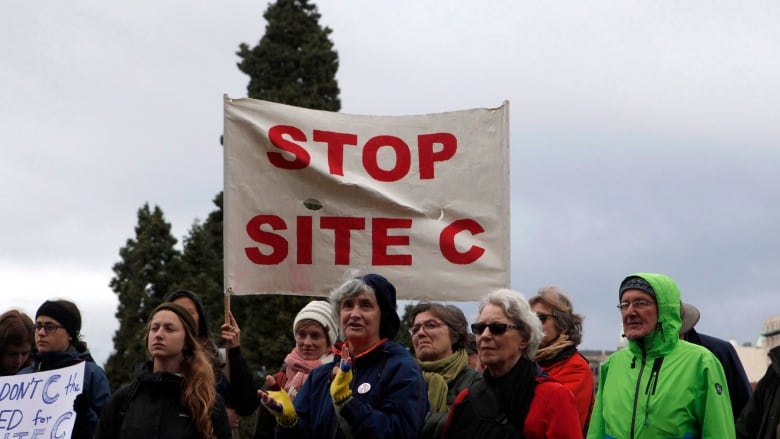 Site C protesters gather after delivering a petition to politicians in Victoria in 2017. (Chad Hipolito/Canadian Press)

The Site C dam could still be stopped by an “eleventh hour” court ruling, according to the lawyer representing B.C. First Nations opposed to the massive hydroelectric project near Fort St. John.

The B.C. government, BC Hydro and West Moberly and Prophet River First Nations were in B.C. Supreme Court Feb. 28 to set a 120-day trial, expected to begin in March 2022.

That date means a ruling would come prior to the scheduled flooding of the dam’s reservoir area in 2023 said Tim Thielmann, legal counsel for the West Moberly First Nation.

“The court has left itself the opportunity for an eleventh hour cancellation of the project,” he said. MORE

The letter says the city is seeking legislation similar to Bill 21 that was introduced in the Ontario legislature in 2018.

“The City of Burnaby has undertaken a series of measures to reduce carbon emissions and address climate change and its impact in areas within our control,” reads the letter. “Burnaby Council has also taken a strong position against the expansion of the Trans Mountain Pipeline because of its impact on global carbon emissions and climate change. However, the actions that are within our purview are only part of the solution.” MORE

Changing or abolishing the Indian Act in order to allow private land ownership may seem like a logical solution, but it’s not without its criticisms.

A boy plays on a broken-down RV on the Cote First Nation, near the town of Kamsack, Saskatchewan. Zachary Prong/Reuters

Currently, in southern Manitoba’s Sandy Bay First Nation—a place where winter temperatures often dip below -40 F—people are living in rat-infested homes without heat or reliable electricity. Rampant mold in northern Ontario’s Cat Lake First Nation is seriously damaging people’s health. In Attawapiskat, some people live in uninsulated sheds. Neskantaga First Nation has had a boil-water advisory for 25 years. In Nunavut, tuberculosis infection rates among Inuit are 26 times the national average due to overcrowded housing. Most people can’t afford to do better; 80 percent of reserves have median incomes below Canada’s poverty line.

Not all Indigenous people in Canada live on reserves; many have separate land treaties and settlement agreements, while others have yet to reclaim their land. Still, housing shortages are a common problem across most First Nations, Métis, and Inuit territories. This article speaks mainly about First Nations reserves.

Changing, or abolishing, the Indian Act in order to allow land ownership may seem like a logical solution for much of the First Nations housing crisis—but it’s not without its criticisms, either.

Many Indigenous people believe that private ownership brings with it a looming threat of foreclosure, which could ultimately chip away at Indigenous territories and rights. It could also disrupt the communal spirit of many communities. MORE

“We’re the ones affected.” Those are the words of youth climate activists who confronted California Senator Dianne Feinstein last week in San Francisco, demanding she sign on to the Green New Deal.

In a video of the interaction that has since been seen across the country, Feinstein dismissed the children—some as young as 7 years old—asking her to take bold action on climate change.

Alberta needs a government that recognizes the coming transformation in the energy sector, says Gil McGowan, president of the Alberta Federation of Labour. POSTMEDIA ARCHIVE

Contrary to what you might have heard, Alberta’s current economic malaise has little to do with government policies or “foreign-funded” environmentalists.

The real problem is that the global oil and gas sector is in the midst of a fundamental transformation.

The first dimension of this transformation has to do with the United States. As a result of the fracking boom, U.S. oil production has more than doubled in 10 years, turning the U.S. into the world’s largest oil producer, surpassing both Saudi Arabia and Russia.

This change has upset the world’s oil supply-demand balance, creating global supply gluts which have driven prices down and led to investment cuts and job cuts in all oil-producing jurisdictions around the world, including the U.S. itself.

It has also allowed the U.S. (the world’s biggest oil market and Alberta’s biggest customer) to become more self-sufficient — a change that undermines Alberta’s business model.

It’s important to understand that this is not just another boom-bust cycle. MORE

Green Leader Elizabeth May thinks it would be foolish for Liberal MPs to try to dispute the truth of what Vancouver Granville MP Jody Wilson-Raybould told the justice committee this week. STEPHEN HUI

Before this month, most Canadians had never heard of Michael Wernick.

But when he stepped out of the shadows to defend the Trudeau government’s handling of the SNC-Lavalin case before the Commons justice committee, it was clear that he was a central player in the story.

As clerk of the privy council and secretary to the cabinet, he’s Canada’s most powerful bureaucrat.

Now, the leader of the Greens, Elizabeth May, is calling for his dismissal.

“Advice from my heart to my friends in the Liberal party,” May said in Parliament. “Do not dispute the truth of what our former minister of justice has said. “Do not attempt to question or undermine or impugn her integrity. No one will believe them if they do. What they must do is tell the truth, let the chips fall where they may, starting with these three steps,” May continued. “Call for a public inquiry. Release the former minister of justice from restrictions in her evidence, and fire the clerk of the privy council office!” MORE 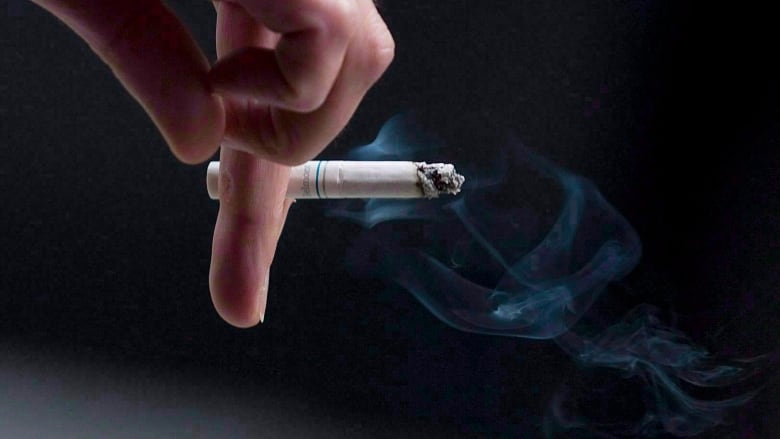 Quebec’s Court of Appeal has upheld a Quebec Superior Court ruling in two class-action lawsuits against tobacco companies awarding billions of dollars in damages to 100,000 people.

In the 422-page ruling, the court said that the Superior Court’s decision was correct, except for some small technicalities.

The adjustment in damages amounts to about $2 million of the approximate $15 billion the companies were ordered to pay, the prosecution said Friday.

“It’s excellent news for the victims that have been waiting for this day for a long time,” said Philippe Trudel, one of the lawyers representing the smokers.

The prosecution estimates the damages the companies will eventually pay out to the smokers will amount to over $17 billion. Interest on the damages continues to accrue as the case moves through the court system. MORE