Twenty years ago, I wrote an op-ed in which I described free-market capitalism as “the most unjust and barbaric economic system ever devised, and one that now oppresses and abuses most of the world’s people.” I was scorned and vilified by neoliberal pundits, and even chided by some progressives who thought that calling the dominant economic system “barbaric” was going too far.

This is how I responded to my critics at that time:

Look up the word “barbaric” in your dictionary, and you’ll find several synonyms, including brutal, cruel, and savage. They all apply to the current capitalist system — and even more so to its leaders. These suave chief executives don’t look or act like Attila the Hun. They dress smartly, talk smoothly, and their table manners are impeccable. But strip away the glossy veneer, and you find the ruthless autocrats beneath the surface.

These modern barbarian chieftains don’t personally lead their hordes to invade other countries. They don’t physically destroy cultures, openly loot and pillage cities, or brutalize their citizens. But they engage in the equivalent of all these barbaric activities from the seclusion of their boardrooms, sometimes with just a phone call or a tap on a computer key. MORE

Big ideas are the only ones that can realistically tackle the climate crisis. 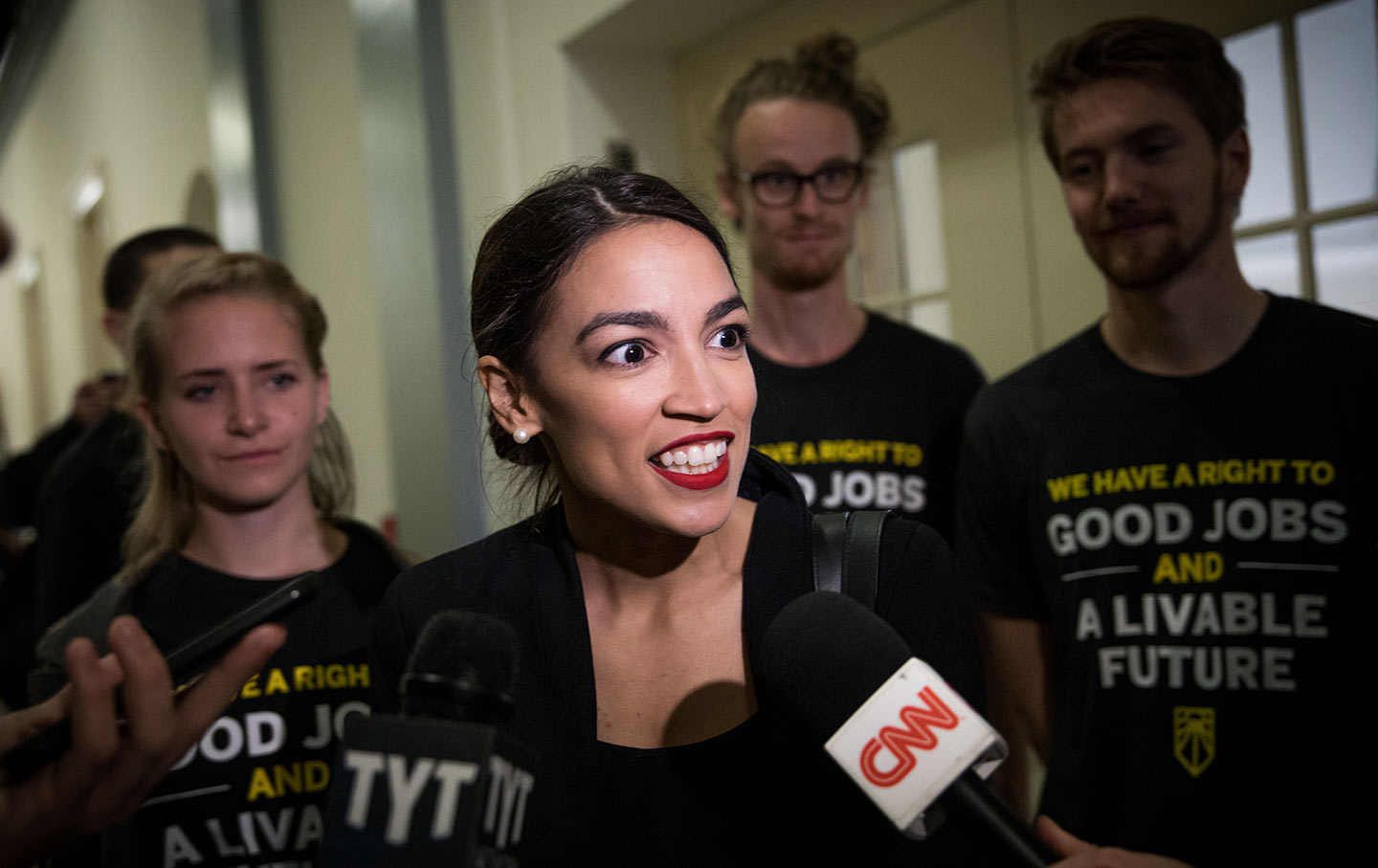 Listen to Naomi Klein on the Start Making Sense podcast.

Jon Wiener: How would you describe the Green New Deal resolution introduced by Alexandria Ocasio-Cortez and Ed Markey?

Naomi Klein: It’s a sweeping plan to radically transform how we get energy, move ourselves around, live in cities, and grow our food; and it puts justice at the center—justice broadly defined, from racial and gender justice to making sure no worker is left behind, battling inequality at every level. It’s really about multitasking. It’s about understanding that we are in a time of multiple overlapping crises, and that we are on an incredibly tight deadline when it comes to lowering greenhouse-gas emissions in time to prevent truly catastrophic warming. In order to bring people along with these necessary changes, there have to be benefits in the here-and-now in terms of the kinds of jobs that are provided and the justice that comes through.

JW: The Green New Deal, you’ve said, is not a question that will be settled through elections alone. What do you mean?

NK: In terms of winning the power to introduce a package as ambitious as the resolution, the only real historical precedent is the original New Deal. And the political dynamics that produced the original New Deal were not a benevolent politician handing reforms down from on high, from the goodness of his heart. Of course it mattered to have FDR in power instead of Herbert Hoover, but it mattered even more to have an organized population which was flexing its muscles in every conceivable way in the 1930s—from sit-down strikes in auto plants, to shutting down the ports on the West Coast, to shutting down entire cities with general strikes. And it mattered also to have more radical voices who were calling for more radical policies than the New Deal was offering, like a truly cooperative economy. All of that created the context in which FDR was able to sell the New Deal to elites. They were grudging about it, but the alternative seemed to be political revolution.

So the only way that something like this happens is if it is accompanied by a huge grassroots mobilization, where every workplace, every sector, every movement is asking, “What would a Green New Deal mean for us? What would it mean in our workplace? What would it mean for the groups that we represent?” If we are going to succeed, they need to make it their own. So it’s going to take a hell of a lot of grassroots organizing, mobilizing all of these sectors to really believe that the Green New Deal is going to make their lives better, coupled with politicians running at every level of government, including for president, with a promise to enact this on day one. MORE 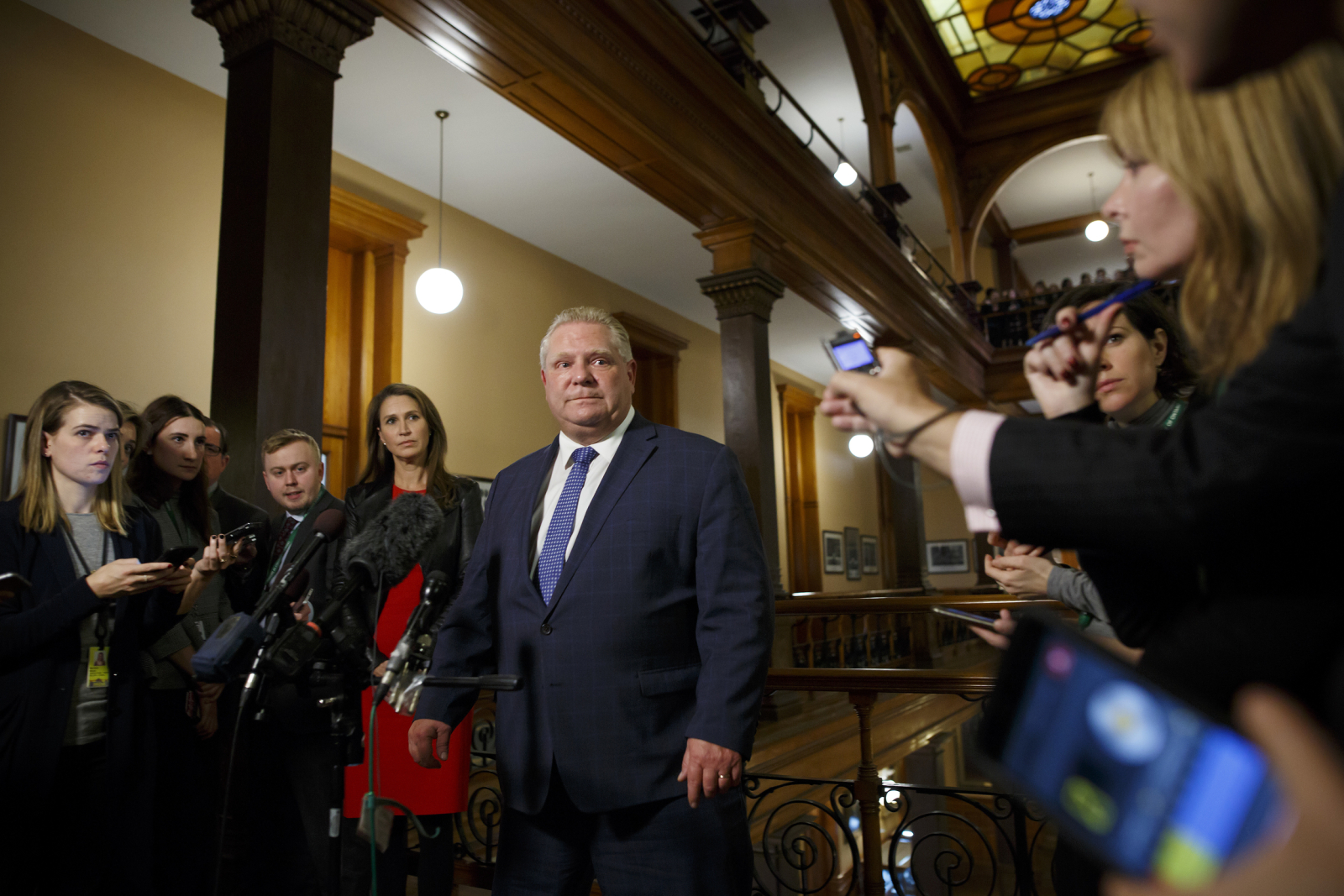 Ontario Premier Doug Ford addresses the media outside his Queen’s Park office in Toronto on November 19, 2018. Photo by Cole Burston

Doug Ford is dismantling a service meant to help citizens and municipalities stand up to developers — a move critics are calling a blow to local democracy.

The Local Planning Appeal Support Centre (LPASC) was set up in April 2018 under the previous Liberal government to help everyday Ontarians navigate and understand the complex planning appeals process to fight development projects that were inappropriate, unreasonable, misplaced or designed without considering municipal and provincial planning and growth guidelines.

It replaced the Ontario Municipal Board, which, critics said, was too slow and favoured municipalities and developers, as they can afford the cost of lawyers and experts in the development appeal process. The OMB was also criticized for not deferring to local municipalities. MORE 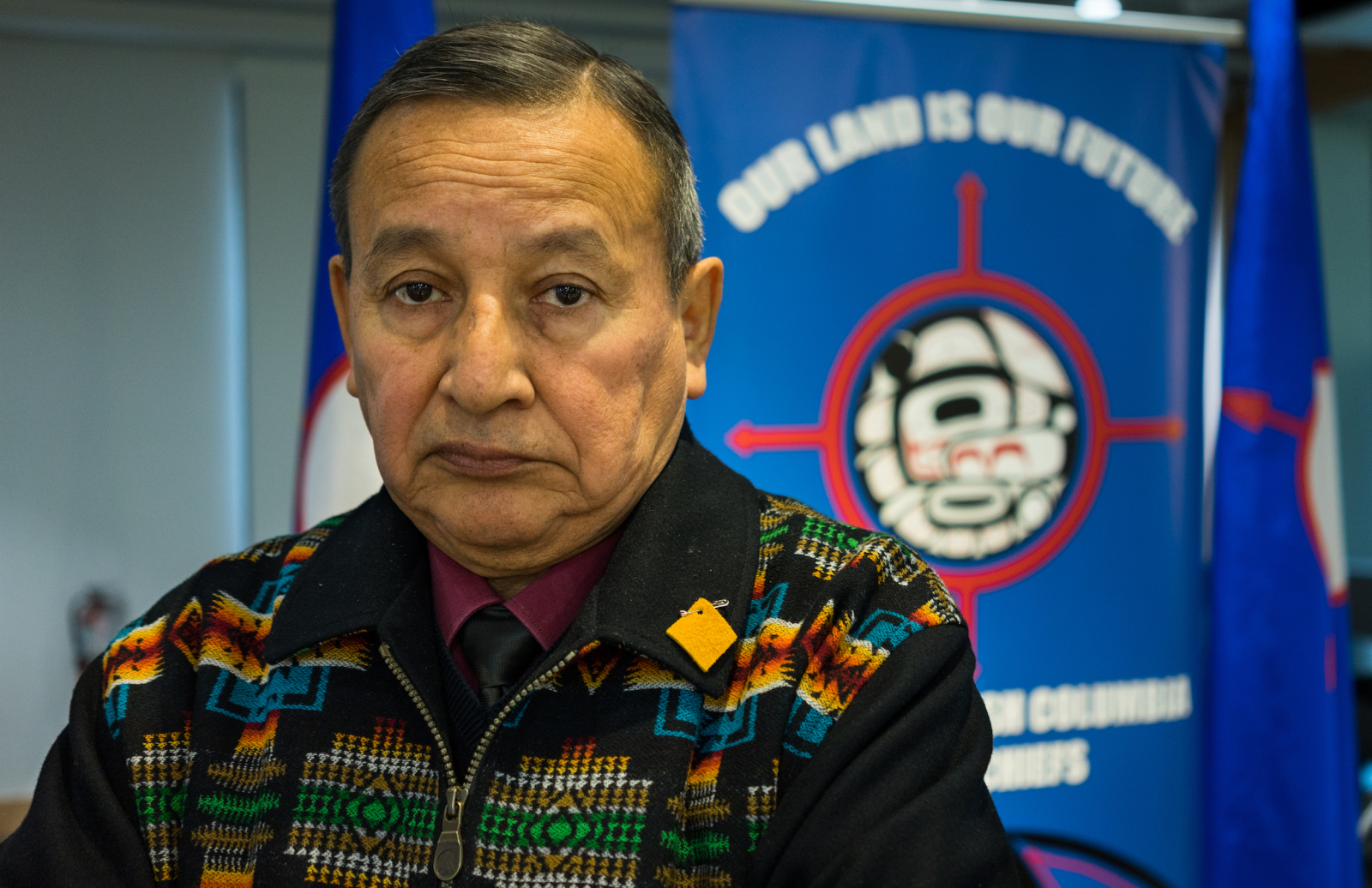 Indigenous leaders and environmental groups vowed the Trans Mountain pipeline would never be built after the National Energy Board issued a second go-ahead to the federal government Friday.

“Indigenous people are not going to stand idly by and watch the destruction of the sacred killer whale population along the coast of B.C.,” Chief Philip vowed. “The thought of killer whales disappearing … is absolutely unthinkable.” MORE

An energy company operating in B.C.’s northeast and now in receivership has left 300 to 500 wells facing possible designation as orphan – or abandoned – at a potential cost of $40 million to $90 million to the B.C. Oil and Gas Commission (BCOGC).

The figures were delivered in the provincial energy regulator’s 2019-20 to 2021-22 service plan released as part of the provincial budget Feb. 19.
B.C. has an orphan well tax, aimed at covering costs of abandonment and restoration of orphan wells, test holes, production facilities and pipelines. The current tax is $0.06 per cubic metre of oil production and $0.03 per 1,000 cubic metres of marketable gas.

This spring, Currie said, that tax will be eliminated and a liability levy phased in over three years. MORE “40 years! 40 years of negotiations that haven’t led to satisfactory social projects, so starting today, we will cease all territory negotiations and we will commence with a demand for title,” said Chrstian Awashish, before entering the courthouse and kicking off a lawsuit in Quebec superior court demanding recognition of their ancestral land.

The Atikamekw Council of Opitciwan is basing much of their case on the landmark 2014 Tsilhqot’in Nation vs British Columbia supreme court decision.

The Tsilhqot’in decision was the first time the Supreme Court of Canada declared Aboriginal title in litigation. SOURCE

JUSTIN Trudeau’s reputation is under fire as he is forced to deny any wrong-doing in the escalating SNC-Lavalin scandal – but what is it all about?

Canada’s Prime Minister Justin Trudeau is facing allegations senior aides within his Liberal Party acted inappropriately. The claims first surfaced two weeks ago but have gained traction within the last few days after a second official left the government this week. Mr Trudeau’s right-hand man Gerry Butts quit as the Liberal’s principal private secretary on Monday, stressing he had no involvement in the SNC-Lavalin scandal. But a Liberal legislator, who spoke to Reuters under the condition of anonymity, stressed the seriousness of the situation.

The crisis centres on Canada’s former justice minister Jody Wilson-Raybould who was allegedly pressurised to drop planned charges against a large construction company.  Ms Wilson-Raybould is said to have been told to ditch bribery and corruption trial charges against SNC-Lavalin Group Inc concerning projects in Libya and levy them with a fine instead. MORE

No ‘inappropriate’ pressure in SNC-Lavalin case: Wernick; Lametti says AG independent but ‘not an island’

Insufficient battery technology is the greatest impediment to a clean energy present and future. Despite what the Green New Deal says or Tesla claims, we cannot transform our electricity generation until we see a revolution in battery technology. 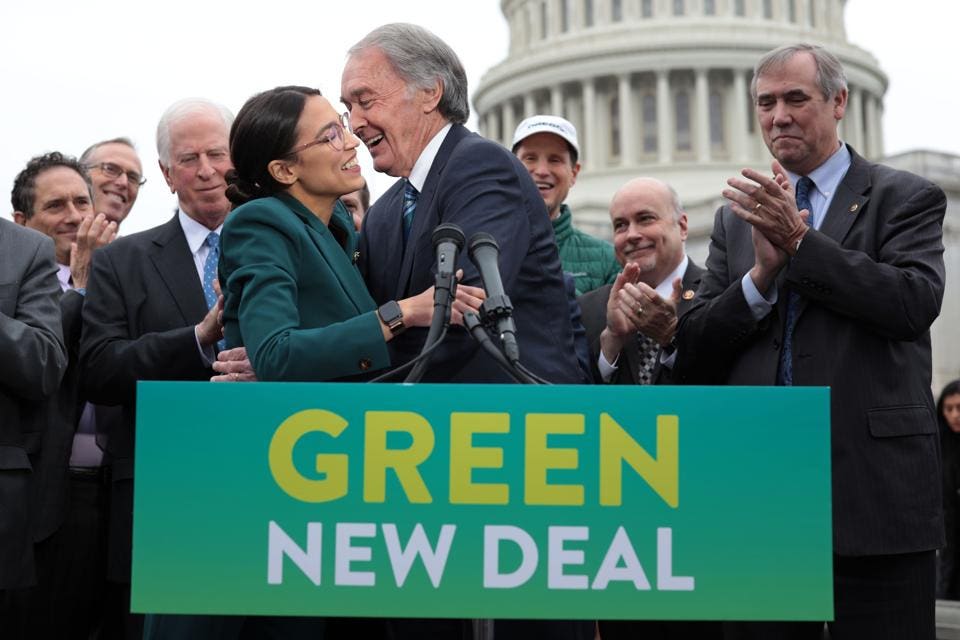 We cannot end carbon emissions from power plants until we find a way to efficiently and safely store large amounts of power. We need to master the ability to quickly charge batteries without destroying their lifespans before electric vehicles take over. To truly make a difference, we need to make the creation and disposal of batteries less harmful to the environment and less reliant on mining in countries with exploitative labor practices. We need to find a way to store massive amounts of solar and wind power to be distributed upon demand to make renewable energies viable as baseload producers on the grid.

The battery revolution that we need will be a major technological breakthrough. There was once a time when such major innovations were wholly the work of private industrious inventors, but maybe that time has passed. The wheel, the printing press and the airplane were all invented by people, not corporations. In the twentieth century, governments and large institutions became more involved in grand advances in technology because of the expense and scale. The government led the Manhattan Project to develop the atomic bomb. The space race was a match between the Soviet Union and the U.S. governments and led to dozens of essential new technologies. The government was also instrumental in the development of the internet. Perhaps government funding and support is needed to push the battery revolution. MORE 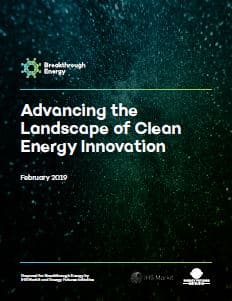 The report—led by former U.S. Secretary of Energy and Energy Futures Initiative founder, Ernest J. Moniz and IHS Markit vice chairman Daniel Yergin—evaluates ways to maintain U.S. leadership in clean energy innovation by better aligning the policies, players and programs that will drive technologies that can keep the nation globally competitive. The report, entitled Advancing the Landscape of Clean Energy Innovation, was commissioned by Breakthrough Energy.

The report assesses energy technologies based on four criteria—technical merit, market viability, compatibility with other energy systems and consumer value.

The report identifies the key innovation pathways that are necessary to maintaining U.S. leadership in clean energy. Among them: increased and better targeted public investment across all stages of innovation—from fundamental research through commercial scale demonstration; a research and investment portfolio embracing multiple technology options; and a strengthened role for states, cities and tribal governments in the innovation process. MORE