The fossil fuel lobby with its paid trolls were back at it again attacking this Budweiser Super Bowl ad that had racked up 14 million views on YouTube  even before it appeared on TV.

Members of the County Sustainable Group in Prince Edward County were not surprised. They had experienced the fossil fuel industry’s wrath that led to the cancellation of Trillium Power’s Project that would have provided  3.5 GW  of clean, reliable and affordable energy and then the cancellation of the White Pines Project 9 wind turbines with a nameplate capacity of 18.45 megawatts (MW). Even the reaction to the CSG’s movie Up in the Air brought forth a spate of virulent commentary, supposedly from ‘citizens’.

When the CSG quickly produced a 20,000 signature petition to protest against the cancellation of the County’s wind projects, our local MPP, Todd Smith, didn’t even bother to show up.

As the following article shows, the fossil fuel industry’s efforts to subvert efforts to curb climate change are vast, persistent, and extremely dangerous to your children’s future and a sustainable planet. 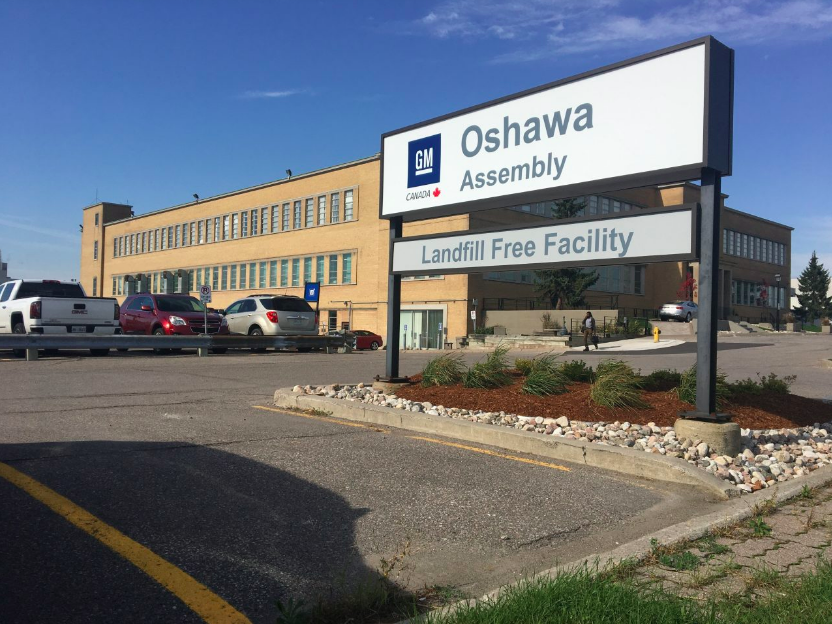 A GM assembly plant slated to close in Oshawa, Ont. could be repurposed, some analysts say. Photo from GM website

GM’s announcement that it will halt production at its award-winning assembly plant in Oshawa, Ont. was hardly a surprise, though it still managed to stun the federal and Ontario governments. This was not the first time large-scale layoffs affected the GM workforce in Oshawa. Many former workers have completely dropped out of the labour market while others have re-entered the workforce in lower paying, less standardized or non-unionized service sector jobs after the retraining programs promised to them proved insufficient and underfunded.

Some felt betrayed by a company that had received generous assistance from the Canadian government in the past. Many observers saw it as an inevitable, if painful, symptom of a long-term process of industrial decay linked to impersonal corporate strategies. Others viewed GM’s decision as a function of high energy costs, imminent carbon taxes and other oppressive corporate regulations and used the closure to extol the trickle down economic logic of low taxes, deregulation and privatization that has led to repeated financial catastrophes and growing inequality.

“These are assets to be built on, not relics of a forgotten past to be purged, @UOIT ‏profs write. #GM #Oshawa #GreenNewDeal #Canada @pstoett ‏

Another perspective views the closure as an opportunity to explore, in earnest, new alternatives. The plant could be refurbished to attract investment from Tesla or other companies engaged in producing less environmentally harmful automobiles. (Ironically, GM’s desire to pursue electric vehicle production was one of the reasons it gave for the closure in the first place, but apparently it did not feel Oshawa was the right location for this transition.) MORE 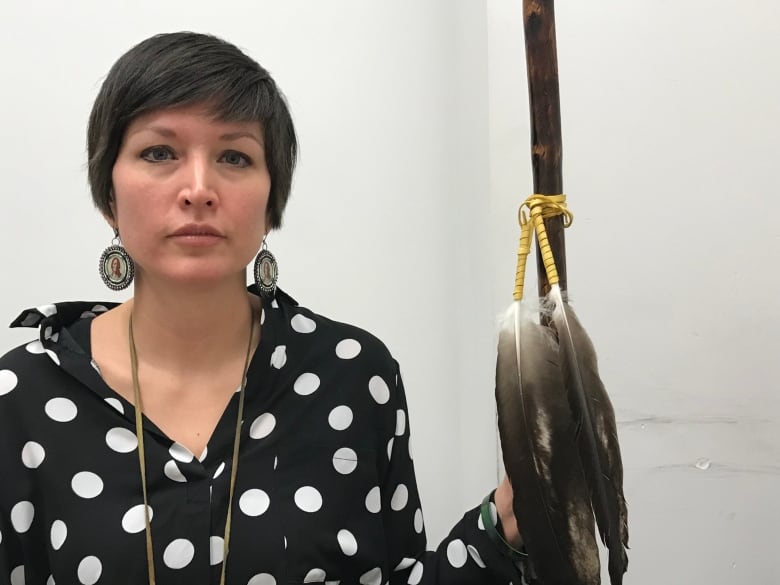 B.C.’s attorney general has been asked to intervene after the controversial arrests of 14 people in a dispute between an LNG pipeline company and Wet’suwet’en hereditary chiefs.

The intervention request came Monday from a B.C. Supreme Court judge in Prince George. Madame Justice Church agreed with a defence application, stating it is in the “public interest to invite the Crown to intercede.”

The ruling came as most of the 14 people arrested by RCMP last month made their first appearance in court.  All are facing contempt proceedings for defying a court order while blocking Coastal GasLink’s access to a potential pipeline route.

“The bigger issue has to do with our hereditary system and with government and industry asserting jurisdiction on our territories,” she said outside court. “They have to look at the evidence and see if they want to proceed with these charges. It may not be in the public interest.” MORE

In a bid to bring more renewable energy and greater resilience to the city of Copenhagen, the Danish government has announced plans to build nine new artificial islands as part of what will become the largest and most ambitious land reclamation project in Scandinavia.

Slated to begin construction in 2022, the project, dubbed Holmene (the Islets), will comprise 3 million square meters of land and will be located just 10 kilometers south of Copenhagen.

Copenhagen-based architecture and planning firm URBAN POWER designed the project with environmentally friendly targets in mind, from the creation of the biggest waste-to-energy plant in Northern Europe to improved biodiversity. SOURCE

The Liberals’ bill, developed with Indigenous peoples, is being unveiled in the International Year of Indigenous Languages. 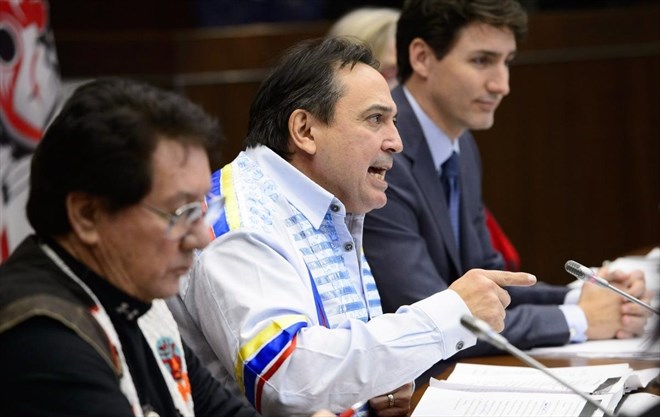 Just before the weekend, the government put the House of Commons on notice that it planned to introduce a new bill, titled “An Act respecting Indigenous languages,” for MPs to debate.

On Friday, during a UN event kicking off the International Year of Indigenous Languages, Assembly of First Nations National Chief Perry Bellegarde described a law that could create programs to inspire Indigenous people of all ages to speak their languages.

“It will be a historic way to mark the International Year of Indigenous Languages when this country — that once tried to eradicate our languages — passes a bill that was developed with us to protect, promote and revitalize our languages.”

From Kenya and Tanzania to Nigeria and Ivory Coast, off-grid African communities are embracing solar energy.

Desperate times call for desperate measures. So Tanzania, where 80 percent of the population has no reliable access to electricity, is planning to import biomass as fuel from Ethiopia this year and is building a $2 billion hydropower project threatening the Selous Game Reserve. Meanwhile, several thousand Tanzanians are finding an easier, eco-friendly solution: solar-powered LEDs available through a pay-as-you-go model.

Tanzania’s woes aren’t unique. The World Bank says annual outages in sub-Saharan Africa can range from 50 hours to 4,600 hours — at the latter end, that’s more than half a year. So an off-the-grid solution is proving valuable in the region and throughout Africa. From Kenya to Tanzania, Uganda to Rwanda, Nigeria to Ivory Coast and even war-torn Somalia, Africans are embracing solar energy solutions that help them power their homes even without being connected to the grid, on an unparalleled scale. MORE

Like Loading...
Last year, the U.S.’s carbon-dioxide emissions increased by an estimated 3.4 per cent, the second-largest gain in the past two decades.  Photograph by Fernando Moleres / Panos Pictures / Redux
In 1974, the economist William Nordhaus described the transition from a “cowboy economy” to a “spaceship economy.” In the former, he wrote, “we could afford to use our resources profligately,” and “the environment could be used as a sink without becoming fouled.” But, in the spaceship economy, “great attention must be paid to the sources of life and to the dumps where our refuse is piled.” He added, “Things which have traditionally been treated as free goods—air, water, quiet, natural beauty—must now be treated with the same care as other scarce goods.”
“It’s absolutely the case that emissions and growth can be decoupled,” Marshall Burke, an assistant professor in Stanford University’s Department of Earth System Science, told me.

“But the switch to nuclear and renewables needs to happen more rapidly. “It takes policy. It won’t happen through markets alone.”

As a small but growing coalition of congressional Democrats, led by Representative Alexandria Ocasio-Cortez, have outlined as part of their Green New Deal, transforming the energy sector—and, really, the entire economy, in a just and more equitable way—will require some sort of carbon tax (preferably a “fee and dividend” approach, which distributes tax revenues as rebates directly to citizens), and also new regulations and huge investments. “We can decarbonize the electric sector at a fairly low cost….That’s where some of the cheapest emissions reductions are to be found. Extensive government subsidies could hasten the spread of renewables—specifically, solar, wind, and batteries—and offset any rise in emissions elsewhere….There are ways to reduce the use of fossil fuels in heating; utilities, for instance, can create incentive programs so that homeowners have a motivation to replace their boilers with electric heat pumps. MORE