How the revenues from levies on fossil fuel are used – and communicating the benefits of a greener economy to citizens – are essential to gain public acceptance, experts say 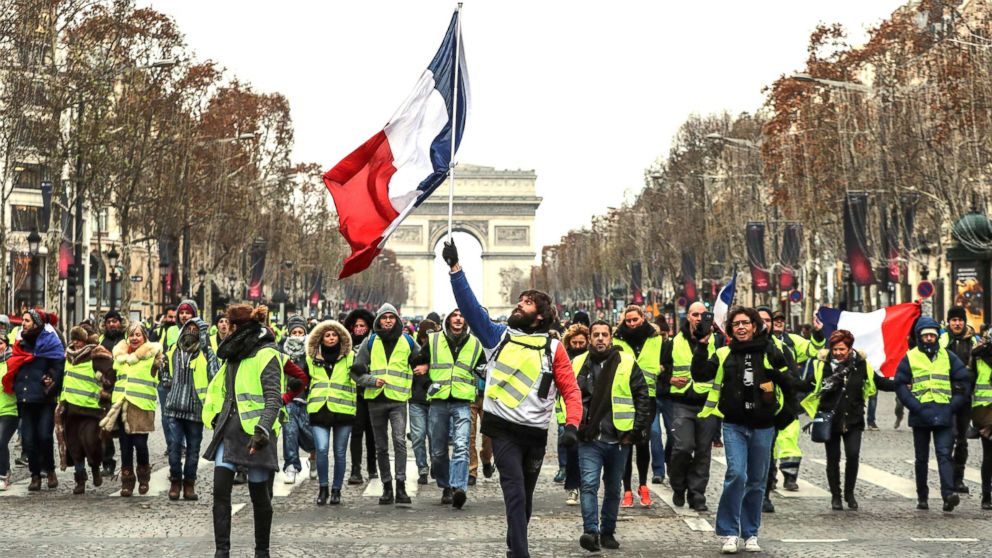 “People get a bit annoyed when (the government) speaks to them about the environment and sustainable development because it comes with taxes and things costing more, when it should cost them less,” she said.

The “yellow vest” protests caused concern among officials gathered at the annual U.N. climate talks in Poland in December, many of them looking for ways to curb planet-warming emissions without stoking social discontent.

Usually that is done by taxing fossil fuels, or by capping industry emissions and setting up a scheme to trade allowances.

Mathilde Bouyé, an associate with the climate programme at the Washington-based World Resources Institute, said France’s aborted attempt to hike fuel prices came on top of a tax cut for the wealthy, and was the last straw for hard-up families. MORE Are you sitting down?

Yogurt with a best before date of today is still good (and safe) to eat for seven to 10 days whether open or unopened.

Reading best before dates as expiry dates probably contributes to food waste and every year a staggering amount of the world’s food is wasted after it has been harvested. That’s wasted fruit and vegetables, fish and seafood, cereals, dairy products and meat.

Best before dates have to do with food quality — freshness, texture, flavour and nutritional value — not safety. They are not expiry dates.

Not confusing “best before” with “expired” will lead to these three things:

10 healthy foods worth buying in bulk

Not too long ago, Ikea promised 100% electric delivery fleets in key cities by 2020. Given the growing but still nascent state of electrified road freight transport, it felt like a pretty ambitious goal.

But in Shanghai, at least, they’ve beat it.

Now Eillie Anzilotti over at Fast Company reports that 100% of delivery within the inner city of Shanghai are now electric, thanks to a partnership with electric truck leasing company DST—which manages a fleet of 16,000 vehicles and the charging infrastructure to go with it.

Achieving a similar goal in cities like New York may be more challenging, however, as US charging infrastructure is streets (sorry!) behind what China has already put in place. That said, the project is moving forward here too—and Lloyd will be delighted to hear that the company is also exploring smaller vehicles like electric cargo bikes or utility trikes for those smaller deliveries that don’t need an entire truck to move them around.

As with many such goals, the benefits of Ikea hitting its target early in Shanghai are multiple. Not only will it mean an immediate reduction in emissions within that particular city—not just a growth of charging infrastructure and truck leasing options for others who want to go the same route—but it shows the world what is possible, and pushes other cities not to be left behind. MORE

Minister Deron Bilous learns about how one company is trying to turn windows into solar panels. Sarah Kraus / Global News

A company operating out of the University of Alberta is one step closer to turning windows into transparent solar panels — thanks to a grant of carbon tax revenues. Applied Quantum Materials (AQM) has a clean energy innovation called luminescent solar concentrators.

CEO David Antoniuk explains what they do: “We can apply a coating to the glass and the glass can absorb energy and it can transform that energy to solar cells which are located on the edges of the window-frame.”

“What you have is simply glass that’s coated, it’s transparent and it generates electricity. So for a building, it could be a net zero building,” Antoniuk said.

“Because it absorbs the UV light, it acts as a filter. It reduces the heat load on a building, reducing the air conditioning costs as well.”

The company is working with All-Weather Windows to design and build the windows — and then in the future AQM is hopeful its partner, PCL Construction, will incorporate the technology into sustainable buildings. They hope to revolutionize the building industry and reduce the carbon footprint of infrastructure. MORE

OTTAWA — Canada’s export-development bank is getting entirely out of the coal game but will continue to fund the oil-and-gas sector as the world transitions towards cleaner sources of energy.

Export Development Canada’s new climate-change policy means the agency that helps Canadian companies with capital to expand their businesses internationally will no longer provide any funding for anything to do with thermal coal, such as supplying equipment to coal-fired power plants or coal mines. Thermal coal is the type burned to create electricity and is distinct from metallurgical coal, used to make steel.

“Coal is one of the biggest carbon emitters with regards to climate change and we wanted to embed our current policy and take it a step further,” said Robert Fosco, vice-president of corporate sustainability and responsibility for EDC.

Dale Marshall, national program manager at Environmental Defence, said the coal policy is an example set for the rest of the world to follow. But he said EDC’s refusal to eliminate oil and gas investments from its portfolio is disappointing. MORE

‘At partisan times like these that we must remind ourselves that when it comes to climate policy—like climate science—we can choose what we listen to and broadcast: evidence and expertise or political soundbites.’

As one factually dubious claim after the other continues to make headlines, an entire decade of real-world evidence from B.C. is sitting on the shelf collecting dust.

And so it is at partisan times like these that we must remind ourselves that when it comes to climate policy — like climate science — we can choose what we listen to and broadcast: evidence and expertise or political sound bites.

Because there is independent research, and plenty of it. There’s the research that found that B.C.’s revenue-neutral carbon tax has cut emissions by 5 to 15 per cent from what they would be otherwise. There’s also the research that says B.C.’s tax demonstrably reduced gasoline demand as well as natural gas use — and actually increased employment. MORE

ON THE SCENE  Photographer James Balog (shown here next to a California wildfire) documents how people’s lives are being affected by climate change.

Climate change, extreme weather events and debates over climate mitigation strategies dominated the news for much of the last year. Yet climate scientists continually wrestle with how best to talk about these issues: Should discussions of climate change appeal directly to people’s emotions, whether fear or anger or even hope? Or are data-driven discussions the way to go?

There is no one answer, of course. But The Human Element, a documentary starring photographer James Balog, aims directly for the gut by putting a human face on the impacts. The movie, now streaming online, shows how human-caused climate change is intersecting with people’s lives. For instance, we see flooded homes in Florida in the wake of Hurricane Irma in 2017. Global warming probably increased Irma’s intense rainfall, researchers have found. We also see firefighters battling wildfires in the American West (the movie is almost entirely shot in the United States). “I felt a great sense of urgency to bear witness,” Balog says in the film.

That collision of people and planet is something that Balog, also the subject of the 2012 documentary Chasing Ice, has been capturing in photographs for decades. In The Human Element, his work is framed through the four ancient elements: earth, air, fire and water. MORE 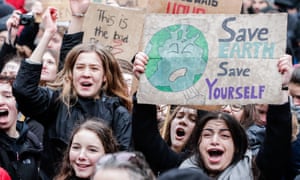 It started with a solo protest outside Sweden’s parliament by 16-year-old Greta Thunberg and has snowballed across the globe.

Schoolchildren demanding action on climate change have played truant and taken to the streets in Australia, Finland, Germany, Ireland, Switzerland and, in their greatest numbers, in Belgium, where 35,000 made their voices heard in Brussels a week ago and a further 12,500 marched on Thursday.

But in the Netherlands, where half the country is below sea level and awareness of global warming is high, there have been no such demonstrations. And for the first march, planned for Thursday in The Hague, organisers say they hope for a rather modest turnout of about 3,000.

“The commitment of Belgian youth seems to be greater than that of Dutch young people,” said the Dutch newspaper Trouw on Friday. “Why?”

But while encouraging students to make their voices heard, the Dutch MEP Sophia in ‘t Veld suggested there may be a cultural reason for Dutch teenagers’ apparent reticence. In report after report, the Netherlands tops OECD countries for high life satisfaction among its young people, partly because they already have the ear of their elders. MORE

The battle against climate change has focused on reducing emissions. An “Ideal Plant” could join the war from the other end — by guzzling more carbon dioxide.

Scientists at the Salk Institute for Biological Studies are tackling another life-threatening problem: climate change. They are setting out to do something that has never been done before, to create the “Ideal Plant” — one that will help curb global warming….

While the idea of genetically engineering a plant to hold carbon dioxide in the ground may sound strange, Law explains it is just a tweak to what plants already do. “The whole job of plants is to take carbon dioxide out of the atmosphere and turn those carbon molecules into sugars, into biomass. They have basically been adapted to take carbon dioxide as their food source,” she explains. “The beauty is that plants are already doing this on such a large global scale, that if we can just tap into that a little bit, we can make a big impact.”

“We all agree in the group that time is of the essence, so we will basically start massively and in parallel working on nine different crop plants,” says professor Wolfgang Busch, one of the project leaders, who studies deep root systems. “We realized from calculations that we ran that the way to achieve the biggest impact for the Ideal Plant is to focus on crop plants, to tap into this global massive agricultural endeavor.”

These include soybeans, corn, wheat, cotton, rice, rapeseed and several non-food cover crops that help soil health. “We have to focus on the ones with the highest acreage,” Busch explains. MORE