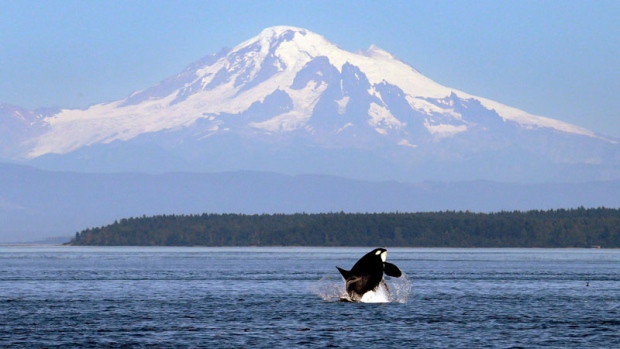 In this July 31, 2015, file photo, an orca whale breaches in view of Mount Baker, some 60 miles distant, in the Salish Sea in the San Juan Islands, Wash. (THE CANADIAN PRESS / AP / Elaine Thompson)

VANCOUVER – Indigenous groups in Canada and the United States are calling for a study of how human activity has degraded the waters off British Columbia’s coast before any new vessel traffic is allowed in the area, where port and pipeline activities are on the rise.

Members of the Tsleil-Waututh Nation in B.C. and the Tulalip Tribes and Lummi Nation in Washington state say they want a halt to any more marine traffic in the Salish Sea until the impact study is complete.

“We’re Coast Salish nations that have come together from both sides of the border with the United States and Canada to address this urgent issue that’s happening to our Salish Sea,” Raynell Morris of the Lummi Nation said Wednesday. MORE