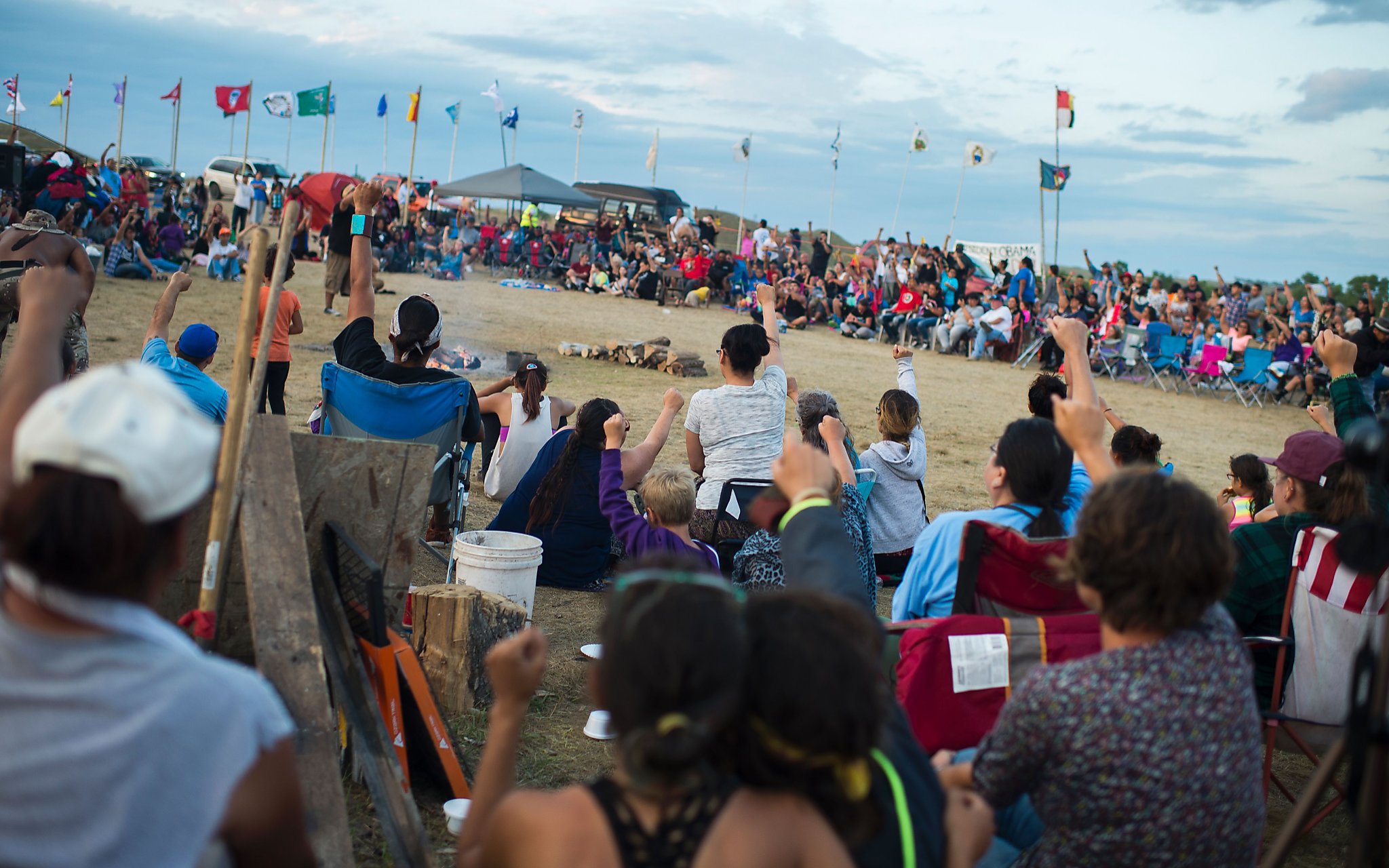 For me, the most symbolic and significant political struggle (amongst many) taking place in the U.S. in recent times has been the fight to stop the Dakota Access pipeline running close to the the Standing Rock Reservation. This conflict is significant because it exemplifies a condition which I call “ecopsychopathy.” There are around 200 hundred classified forms of mental illness, and this is one I would like to add to the list. Ecopsychopathy can be described as a “lack of empathy, connection or sense of responsibility to the natural world, resulting in its abuse and exploitation.”

The inability to empathise is the major characteristic of psychopathy. Psychopaths are emotionally disconnected from other people, who are just objects to them. They have no “fellow-feeling,” no ability to feel pity or guilt. This makes it possible for them to commit acts of cruelty and exploitation which would be far beyond normal human beings. Since they have no feelings for others, there is nothing to stop them inflicting suffering on them, and exploiting them for their own devices.

This is a perfect description of our culture’s attitude to the natural world. Many of the world’s indigenous peoples feel a connection to nature which we “civilized” people seem to have lost. Indigenous people sense a sacredness in nature, feel that they share their being with it, and so are reluctant to harm it. This is typified by the Lakota holy man Black Elk, who said “Every step that we take upon the Earth should be done in a sacred manner; every step should be taken as a prayer.” And it’s also exemplified by the Sioux people’s opposition to the Dakota access pipeline. MORE

With a Green New Deal and Student Strikes For Climate, will young people save us yet? 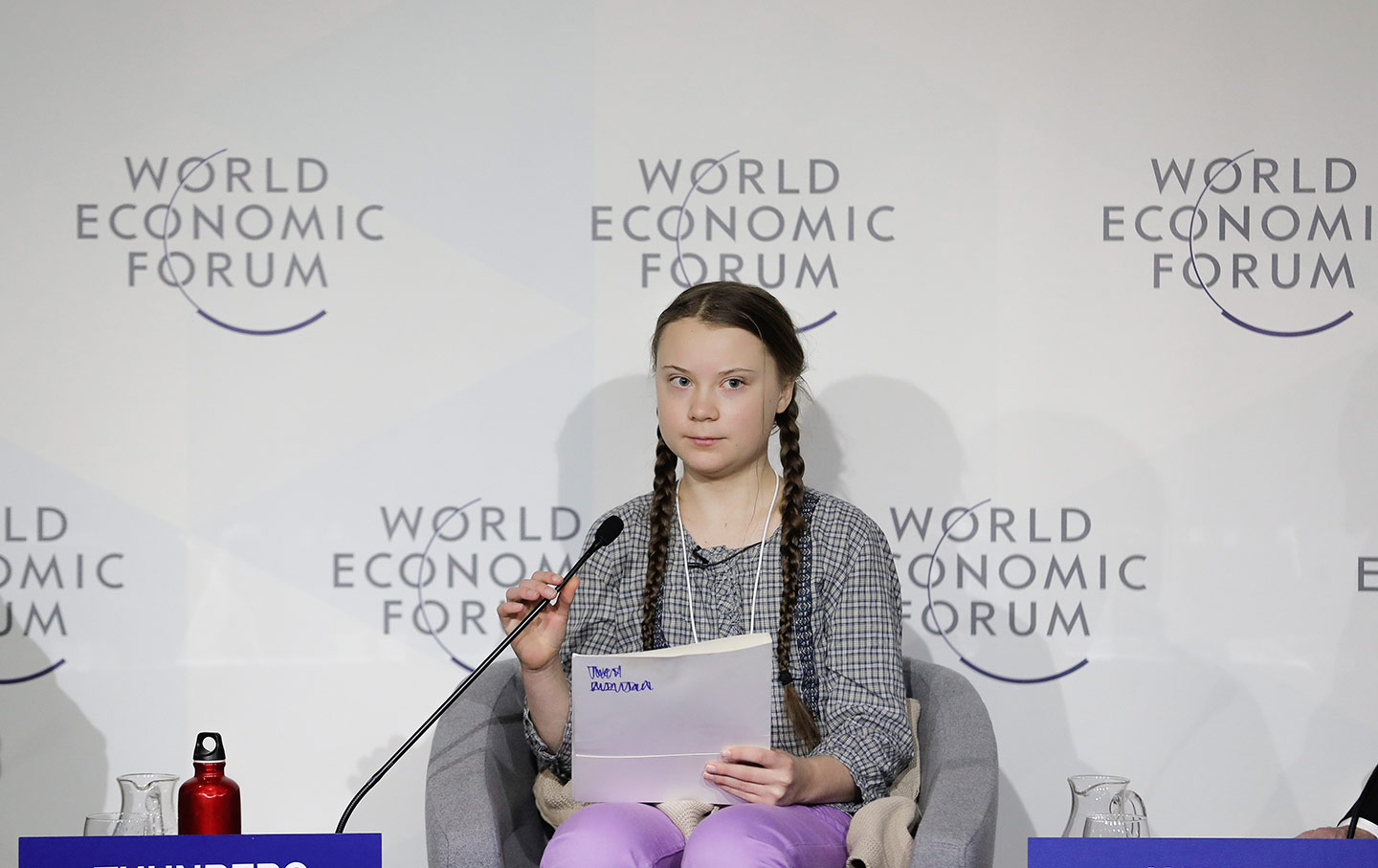 If you don’t know who Swedish teenager Greta Thunberg is, you can think of her as an international climate-change counterpart to Representative Alexandria Ocasio-Cortez. Like the rock-star congresswoman from New York, Thunberg is a charismatic young woman whose social-media savvy, moral clarity, and fearless speaking truth to power have inspired throngs of admirers to take to the streets for a better world and call out the politicians and CEOs who are standing in the way.

Ocasio-Cortez, 29, is known for championing the #GreenNewDeal and schooling right-wing haters on Twitter. Thunberg, 16, is known for launching the #SchoolStrike4Climate movement—tens of thousands of high-school students worldwide are skipping school on Fridays until their governments treat the climate crisis as an emergency—and for torching billionaires and heads of state at the World Economic Forum in Davos last week.

Demolishing the convenient notion that we are all to blame for climate change, Thunberg told a Davos panel that included president Trump’s former chief economics adviser Gary Cohn, “Some people, some companies, some decision makers in particular have known exactly what priceless values they have been sacrificing to continue making unimaginable amounts of money.” She paused before a final thrust of the knife: “I think many of you here today belong to that group of people.”

Call them the Climate Kids. Like Ocasio-Cortez and Thunberg themselves, the grassroots activist movements they have roused are comprised almost exclusively of teenagers and twentysomethings. These are not your father’s environmentalists: supplicant, “realistic,” and accepting of failure. These young people are angry about the increasingly dire climate future awaiting them and clear-eyed about who’s to blame and how to fix it. And they seem to have the bad guys worried. MORE

Bayfield sits on the edges of Lake Huron, Ontario, and has a population of 1,112 people and is a community of Bluewater

The area has already been designated a “Blue Community“, a project of the Council of Canadians, and have made massive strides to do away with plastic water bottles and install refillable stations.Through the Friends of Blue Bayfield Association, 2500 refillable bottles have been distributed and with the help of sponsors, 5 refill stations can be found in the village and over 30,000 refills have been undertaken at these sites!  MORE

Premier Horgan is in court, defending a Christy Clark-era decision and opposing the Squamish Nation’s legal challenge that seeks to stop the Trans Mountain pipeline and tankers.

This isn’t what they were elected to do. The BC government promised to use all the tools in its toolbox to stop the Trans Mountain pipeline and tankers project.

So why is Horgan now fighting to uphold the pipeline project’s approval – and against the Squamish Nation – in court?

When the project was first approved in 2016, then-Leader of the Opposition John Horgan asked of the Premier, “Why is Christy Clark hiding behind a flawed process created by Stephen Harper?” [1]

Now that he’s Premier, we’re forced to ask the same question of him.

There are success stories and emerging giants in Canada’s clean technologies sector, spinning benefits for both large urban centres and small rural towns.

Produced in collaboration with the Ivey Foundation and I-SEA, this special report tracks Canada’s progress to a low carbon future. National Observer retains full and final editorial control over the reporting. HERE 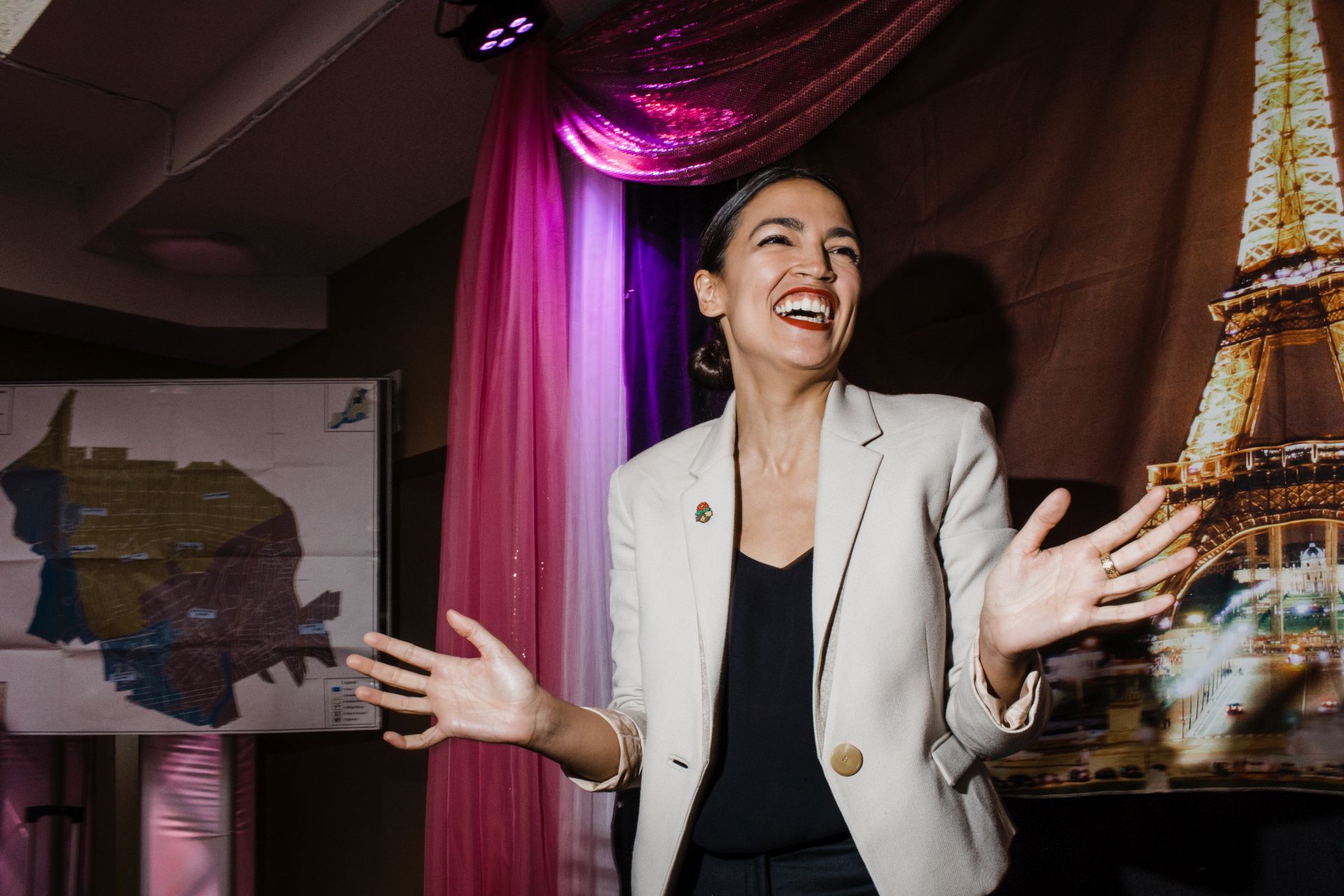 Democratic Rep. Alexandria Ocasio-Cortez shown at a political event in the Bronx borough of New York City on June 27, 2018. Photo by Corey Torpie

Rep. Alexandria Ocasio-Cortez (D-N.Y.) and Rep. Chellie Pingree (D-Maine) sent a letter to three of the nation’s biggest tech companies on Monday decrying their sponsorship of a conference this month that promoted climate change denial.

“The spreading of misinformation can be dangerous to our society.” #climate

As Mother Jones reported last week, Google, Facebook, and Microsoft all sponsored LibertyCon, a libertarian student conference held in Washington, DC. The event featured a group called the CO2 Coalition, which handed out brochures in the exhibit hall that said its goal is to “explain how our lives and our planet Earth will be improved by additional atmospheric carbon dioxide.”

One brochure claimed that “more carbon dioxide will help everyone, including future generations of our families” and that the “recent increase in CO2 levels has had a measurable, positive effect on plant life,” apparently because the greenhouse gas will make plants grow faster. The group also sponsored the conference and a talk titled “Let’s Talk About Not Talking: Should There Be ‘No Debate’ that Industrial Carbon Dioxide is Causing Climate Catastrophe?”

Ocasio-Cortez and Pingree, who are both making climate change a priority in the new Congress, were not pleased by the news. On Monday, they sent a letter to the CEOs of Google, Facebook, and Microsoft expressing their concern that the tech companies are contributing to the spread of misinformation about the reality of climate change despite their public commitment to reducing carbon emissions in their own operations. MORE 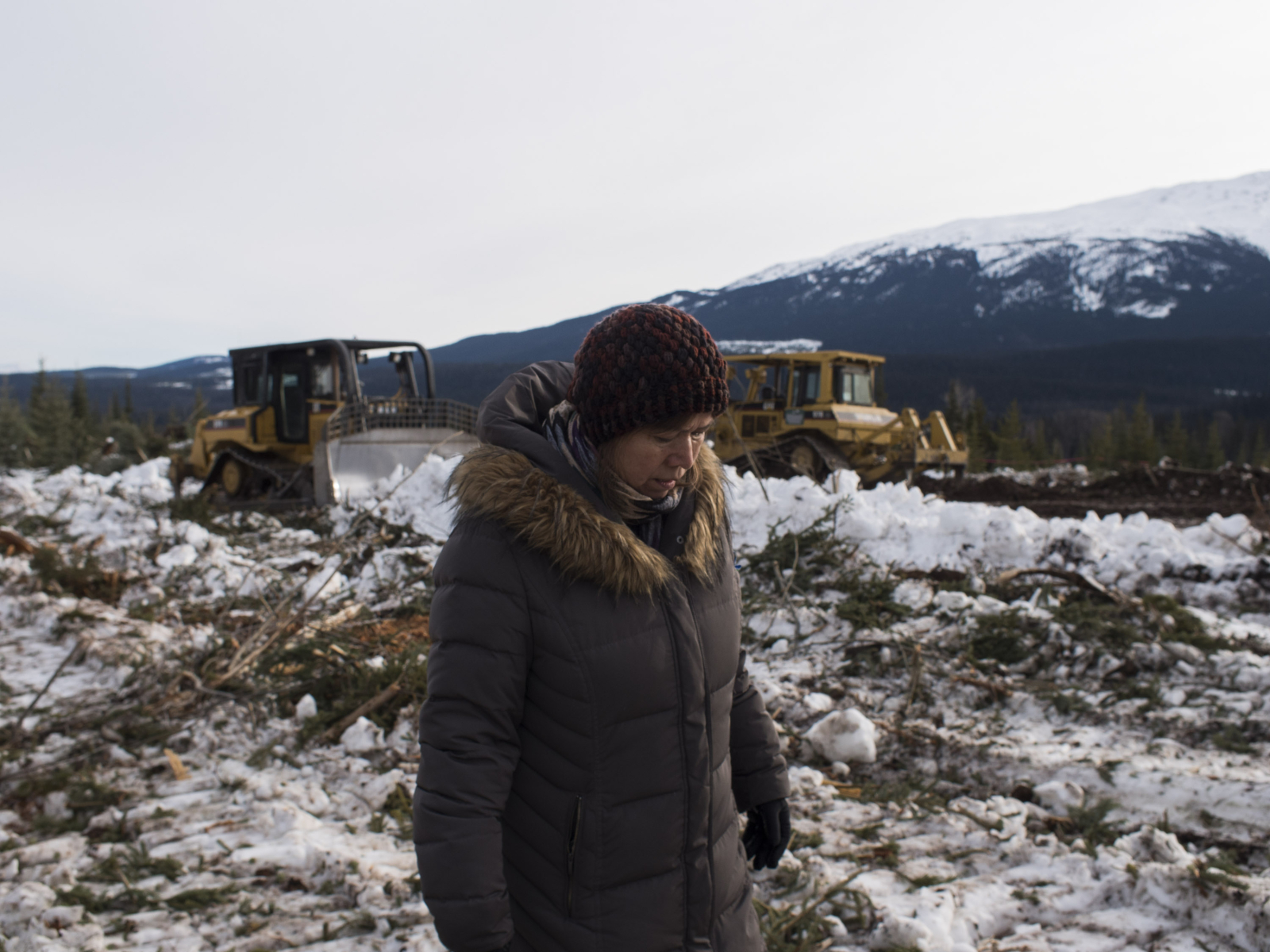 A subsidiary of Calgary-based energy company TransCanada bulldozed through traplines and personal property from two different clans of the Wet’suwet’en Nation last week, while the RCMP enforced an interim injunction requested by the company so that it could proceed with construction. Some Wet’suwet’en members said the RCMP illegally prevented them from entering their own territories, violating the nation’s rights.

“They bulldozed through one of our traplines, pulled them out and clearcut the area,” Freda Huson, spokesperson for the Unist’ot’en House, told National Observer on the phone Monday morning. “The police told us the interim injunction against us overrides the traplines. The injunction says we can’t come within 10 metres of the work area, but our traps are outside of the 10 metres.”

Hereditary chiefs and some other members of the nation have questioned the validity of the interim injunction, since the company used support from contested leadership, as evidence of consent. Wet’suwet’en leaders, hereditary chiefs, matriarchs, spokespeople and community members, continue to demand that they are the only authority over their traditional territories, through a governance system that was also recognized and upheld in the Supreme Court of Canada in ‘Delgamuukw v. British Columbia.’ MORE