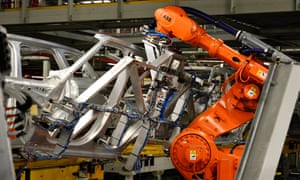 A robot works on cars at Jaguar Land Rover, in Solihull, West Midlands. Photograph: John Robertson for the Guardian

World leaders have been urged by an influential United Nations agency to sign up to a universal labour guarantee to bolster fundamental workers’ rights, including adequate living wages and collective bargaining through trade unions.

Designed to address rapid changes in the workplace triggered by the rise of the robot economy and technological automation, the International Labour Organization said a package of measures was required to put the world economy on a sustainable footing for the future.

The ILO report calls for a universal labour guarantee that would enshrine the right to an adequate living wage, maximum limits on working hours, and health and safety protections. It would also enforce freedom of association in trade unions and the right to collective bargaining, freedom from forced labour, child labour and discrimination. MORE