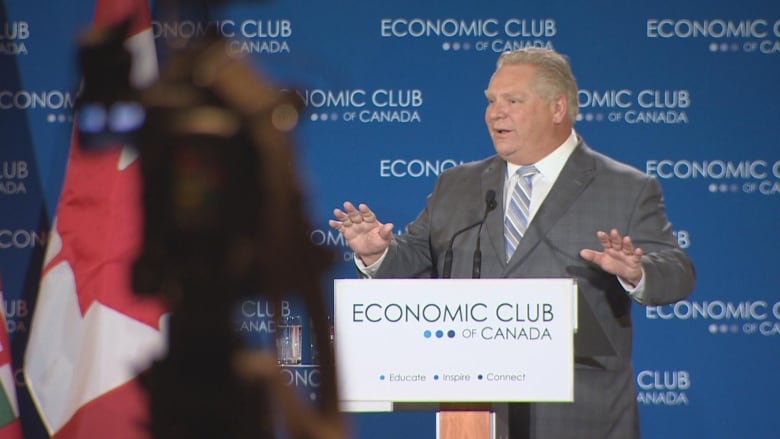 In a speech to the Economic Club of Canada, Ontario Premier Doug Ford warned of a ‘very, very real’ risk that the federal government’s carbon tax will trigger a recession. (Radio-Canada)

“A carbon tax will be a total economic disaster,” Ford told the estimated 1,000 paying guests at the lunchtime event in downtown Toronto on Monday.

Asked by CBC News for clarification, Ford’s press secretary pointed to a study by the Conference Board of Canada that suggests a federally imposed carbon tax would shrink the nation’s economy by $3 billion. While that sounds like a big number, it is only a fraction of a per cent of the country’s $2.1 trillion GDP.

“Our analysis suggests the economy will shrink marginally in response to the carbon tax,” the authors said. “While the overall economic impact is small, the distribution is not equal across sectors, with some industries bearing notable costs.” The report does not say that the carbon tax will cause a recession. Nor do other economists.  MORE