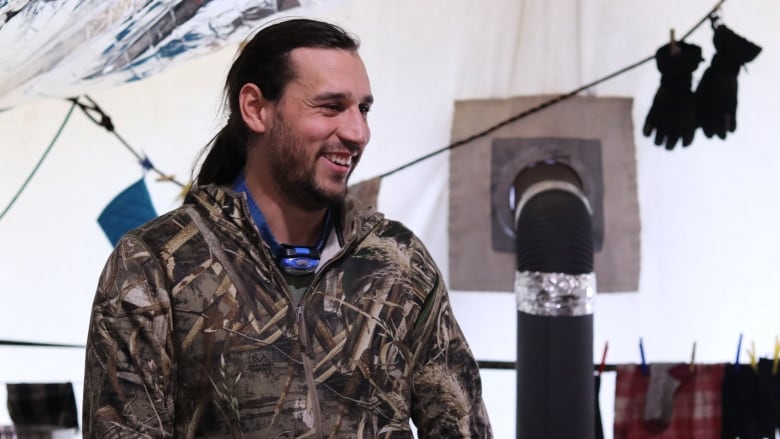 Cody Merriman, who carries the name Wedlidi, in the cook tent at the Gidimt’en access point camp constructed in northern B.C. to oppose the construction of a natural gas pipeline. (Chantelle Bellrichard/CBC)

Dozens of Indigenous people and their supporters have set up camp in a remote part of northern B.C., using a strategic access point to control who can get into the territory, as RCMP officers set up nearby.

The camp was built following an interim injunction from the B.C. Supreme Court in December to support Coastal GasLink with starting construction on a nearly 700-kilometre pipeline through the territory.

Coastal GasLink has said it needs access to the area as soon as possible to meet construction deadlines for its role in an estimated $40-billion natural gas pipeline and transformation plant.

The Gitimd’en are one of five clans that make up the Wet’suwet’en. In total, there are 22,000 square km of Wet’suwet’en traditional territory in this northern region of B.C., an area that was part of the landmark Delgamuukw case where the Supreme Court of Canada confirmed the Indigenous nation’s land rights and title had never been extinguished. MORE

“We don’t have access to a court system to judge Canada at the UN, but we can embarrass Canada.” —Russ Diabo

….A lot of grassroots Indigenous people wonder why Indigenous Nations don’t take Canada to the world court for breaches in dealings and wrong-doings against them, said Diabo. But the world court just doesn’t function as an option in that way.

Under the United Nations’ system, Canada could only be brought to the world court by another State party, he said. And there are no nations clamouring to bring Canada up on charges. Indigenous peoples themselves have little standing at the UN, because they are not member States.

Diabo also made an important distinction off the get-go. UNDRIP is a declaration not a covenant (or convention). A covenant of the UN is a legally-binding treaty, which once ratified requires the parties to adjust their domestic laws to comply with international obligations. A declaration is not legally binding. A declaration is meant to be inspirational in its intent. And, in fact, the Canadian government has described UNDRIP as aspirational. MORE

As we reflect on a year of extreme weather and ominous climate talks, Guardian environment writer Fiona Harvey explains why 2019 could see some much-needed breakthroughs 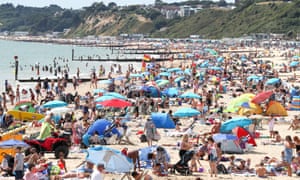 People enjoying the heatwave on Bournemouth beach in Dorset as the hot weather spread across the UK in summer, marking the driest start to a summer since modern records began in 1961. Photograph: Andrew Matthews/PA

There are clear signs of hope on climate change also in the rapidly falling cost of renewable energy technology, which is now competitive with fossil fuels. And the Keep it in the ground campaign has succeeded in encouraging many investors to move their money out of fossil fuel stocks.

But most of all the civil society campaigns which have ramped up in 2018 and look set to increase their momentum in the coming year are taking effect. Public opinion around the world is that our leaders, governments and businesses should be doing more on this vital issue. This can be seen in some unexpected ways, such as the rise of veganism and flexitarian eating, as people seek to reduce their impact on the climate from eating meat. Through well-publicised and effective movements and actions, more and more people are refusing silently to acquiesce in ignoring the dangers to the climate. SOURCE

Who will take pole position in the $560 billion autonomous driving race?

Transportation as we know it would be impossible without the quantum leaps in technology that have taken place over the past centuries. It is undeniable that the next big thing will be autonomous driving. With this wave of innovation, traditional players in the automotive industry could wind up in the passenger seat, with new entrants sitting pretty behind the wheel.

For original equipment manufacturers to survive in this market, there are five key questions to answer: MORE

Just a few days ago, a huge milestone in our collective journey to 100% renewable energy was reached when Cincinnati, Ohio became the 100th city to pledge a switch to 100% renewable electricity by 2035. With your help, we’ve seen cities across the country make the pledge, from Denton, Texas to Santa Barbara, California. With every city that Commits to Clean through 100% renewable energy, we take another important step toward reducing the negative health effects caused by climate change and the burning of fossil fuels. The solution is here and we’ve seen that it not only is attainable—it’s a solution being embraced across the nation because of the power in our collective voice. MORE

Cities and communities across the country are ready for a just transition to 100% clean, renewable energy! Tell your mayor and local leaders you’re ready for 100% clean energy for all! TAKE ACTION